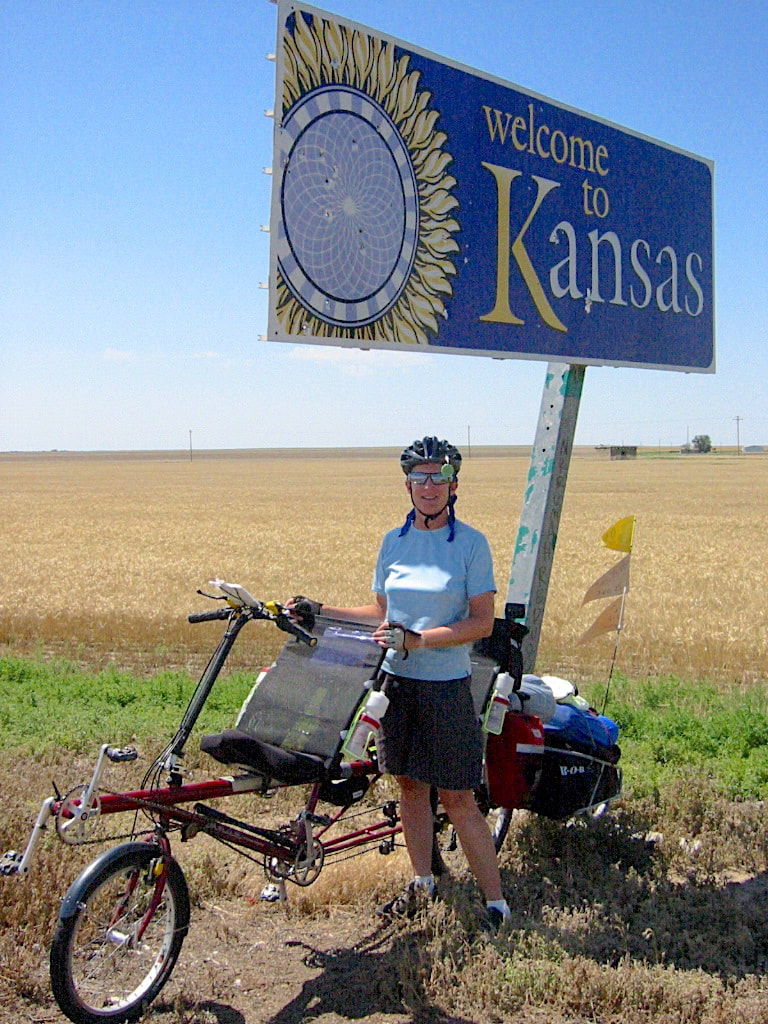 ... but the winds turned to headwinds, crosswinds, and a t-storm ahead of us, which slowed us down to doing only 20 more miles that day. 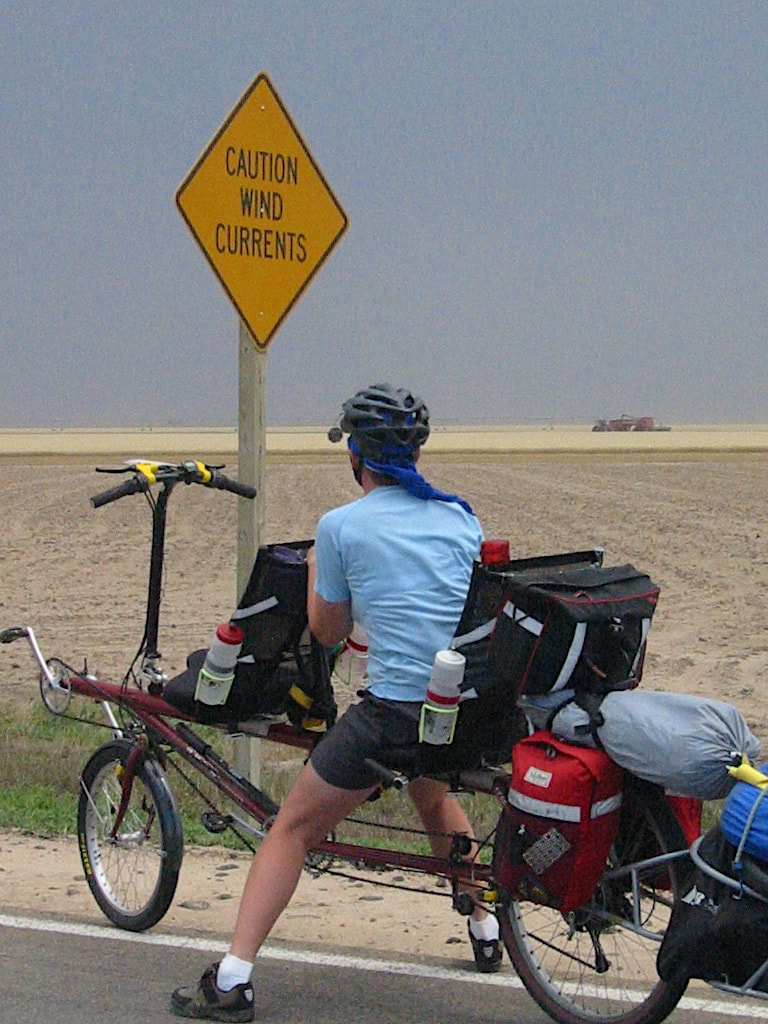 We met 4 more cyclists coming from the east that day (including "Popeye Jim"). We stopped in Leoti after 82 miles. 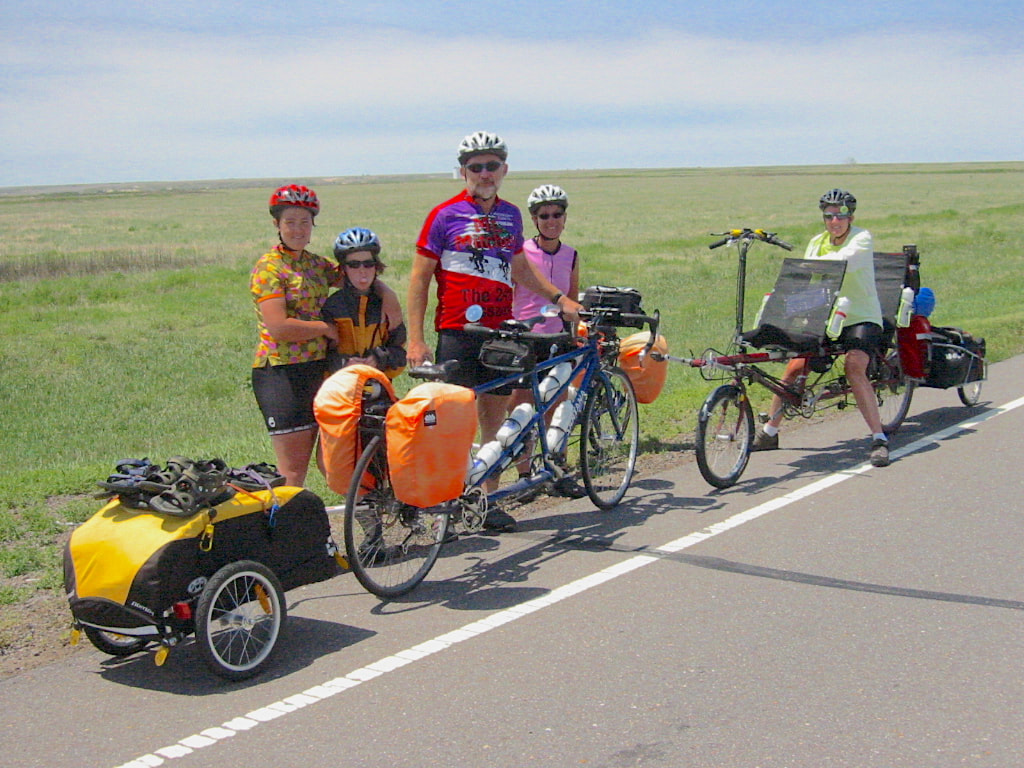 When we reached Rush Center Kansas, two Trans-Am cyclists (Andrew and Nathan) rushed out of a pizza joint when they saw us pull into town. 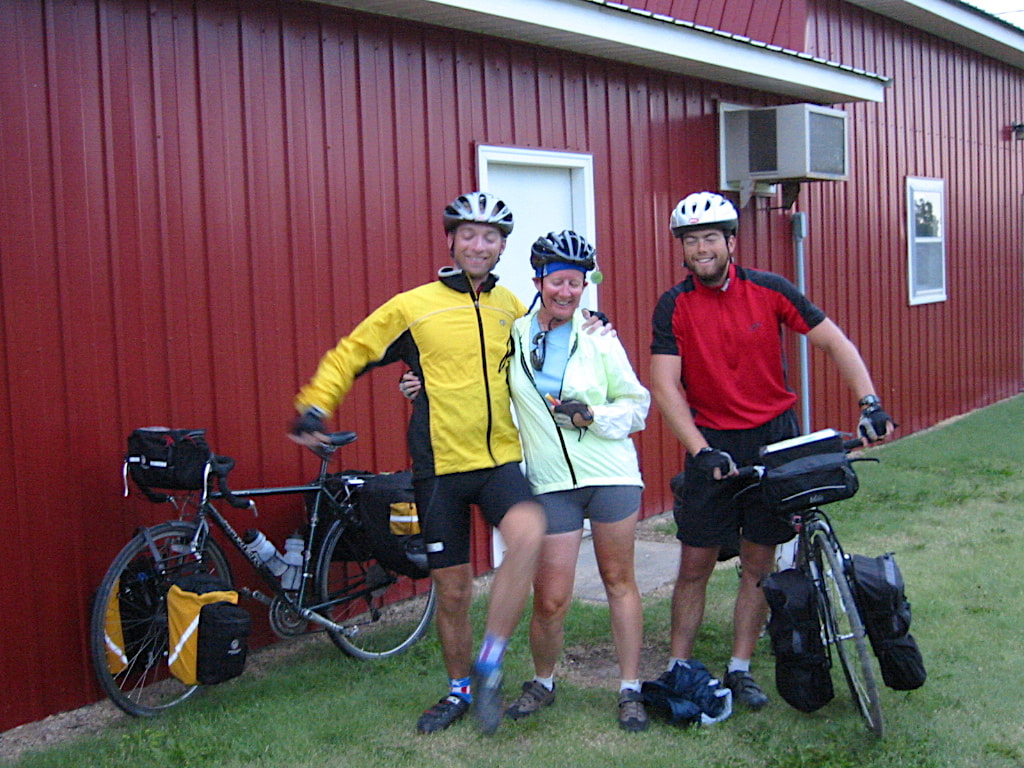 They had been given the key to the local firehouse by the owner of the pizza joint (also the Fire Chief) and had us join them in there for the night. Free showers, dry shelter (threat of rain that night) and great company. Karen and I went to a bar/grill next door to celebrate our 10th, and found only 3.2 beer and coolers ... no Chateau d'yQuem!
​
(- posted from Steve's home in Buhler Kansas)
=======================================
Saturday, June 26, 2004 - Day 30 - 76 miles
More headwind most of the morning, but not as bad as the last two days. Chuck and Bev, our hospitality hosts for that evening came out to greet us and we finished the day at their place around 3pm. After dinner and refreshments, we shared bike stories, cat stories and lots more stories before calling it a night. We woke up the next morning with two kitties sharing our bed, and we felt right at home! Thank you Chuck and Bev, and best of luck on getting a bike-friendly hostel running. We'll be back!!!
​
(- posted from Steve's home in Buhler Kansas)
=====================================
Sunday, June 27, 2004 - Day 31 - 48 miles
We got started around 9am after waiting out some rain. The weather started to look like it was going to turn in our favor! We actually started feeling the first mild tailwind since Tribune and it was warming up into the 80's again. We pulled into a little corner town called Medora and noticed that our hopes of big miles today were likely to get squashed ... a BIG stormcloud was headed our way. We stopped to evaluate the sky at a western antique/collectables shop on the corner and the owner stepped out to chat with us. 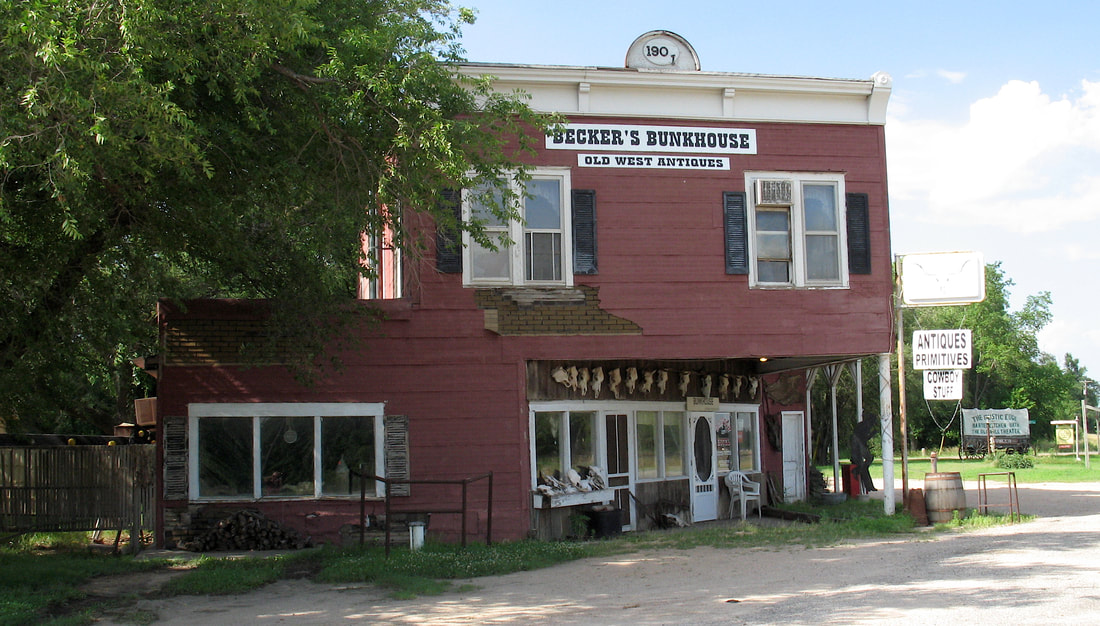 He invited us in for cold drinks (on the house no less!) and we got to look around while inside. Cool place, lots of great items in there, including some bone-handle knives that caught my attention. Beautiful. I asked if he might have a riding crop that we could take to fend off the dogs in Kentucky that everyone is telling us about, but no luck ... he only had long bullwhips!

We continued on, risking an "interface" with the stormclouds, and I remembered the shop owner's advice about a park in Buhler, just 4 miles away, that had some cover in case we got snagged. We did!! We dove into a baseball dugout just in time to keep from getting soaked. After sitting there for about an hour, a red truck pulled up and a familiar face appeared about the end of the dugout ... it was the store owner coming to see if we made it! We told him (Steve Beckman) that we planned to wait out the rain till 6pm. If it cleared by then, we would continue on to te next town, and if not, we would pitch the tent right there in the dugout. Steve offered us a better alternative: he would come back at 6pm, and if we were still there, he would take us to his home for the night.

Well ... 6pm arrived and so did Steve and it was still raining! So here we are spending the evening with Steve and Sarah at their farm in Buhler Kansas! We just finished dinner, Karen has pulled our freshly washed riding clothes from the dryer, and a warm bed is awaiting us again. It's TRUE folks ... the legendary Kansas hospitality is no mere legend ... it's a fact of life out here, and we couldn't be more thankful! 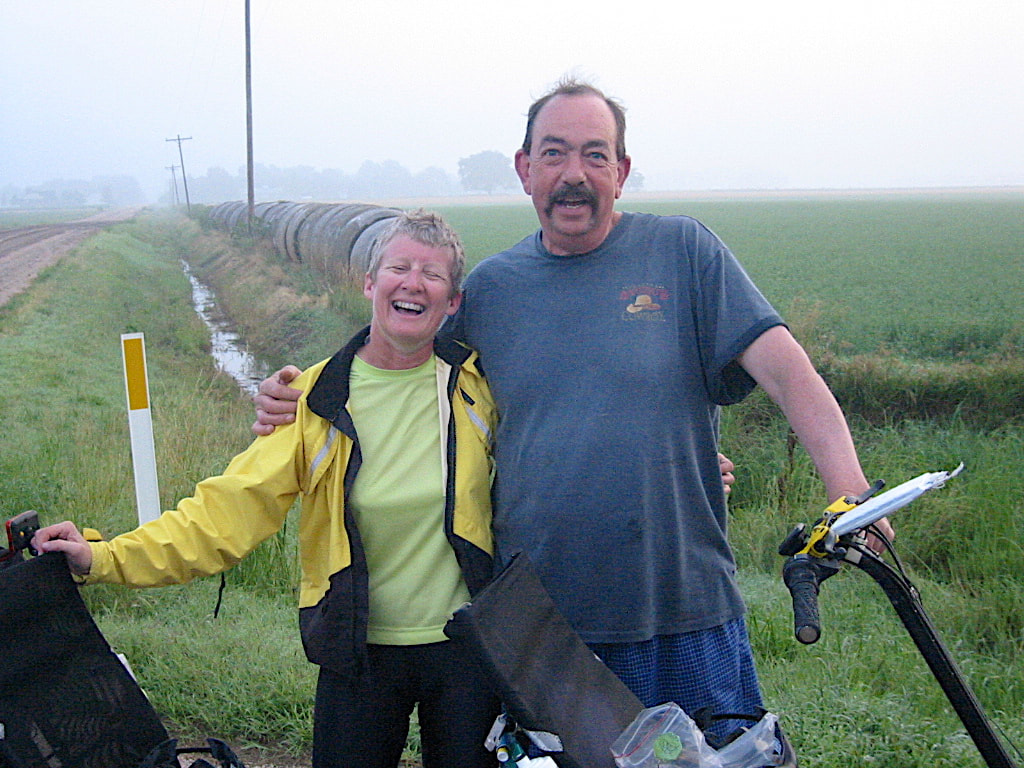 Good sign that we're finally moving from the hot dry plains, to the hotter humid east end of Kansas. Of course, we get to keep the headwinds that have pestered us all the way across the state. We met two more westbound cyclists at breakfast and that chat held us up from a quick munch-and-run. No matter .. we've enjoyed meeting and exchanging notes with all the cyclists we've crossed paths with across the state. We also met "Beau" in Cassoday and had a late lunch with him. Sorry we had to share the bad news of the chip-seal ahead of him and 20 miles of very rough road. But he seemed ready for the task.

In Rosalia,we stopped at a country store that has a log-book of cyclists who've passed by and signed in since 1992. It was fun reading the notes of all the westbound cyclists who we've met in passing. 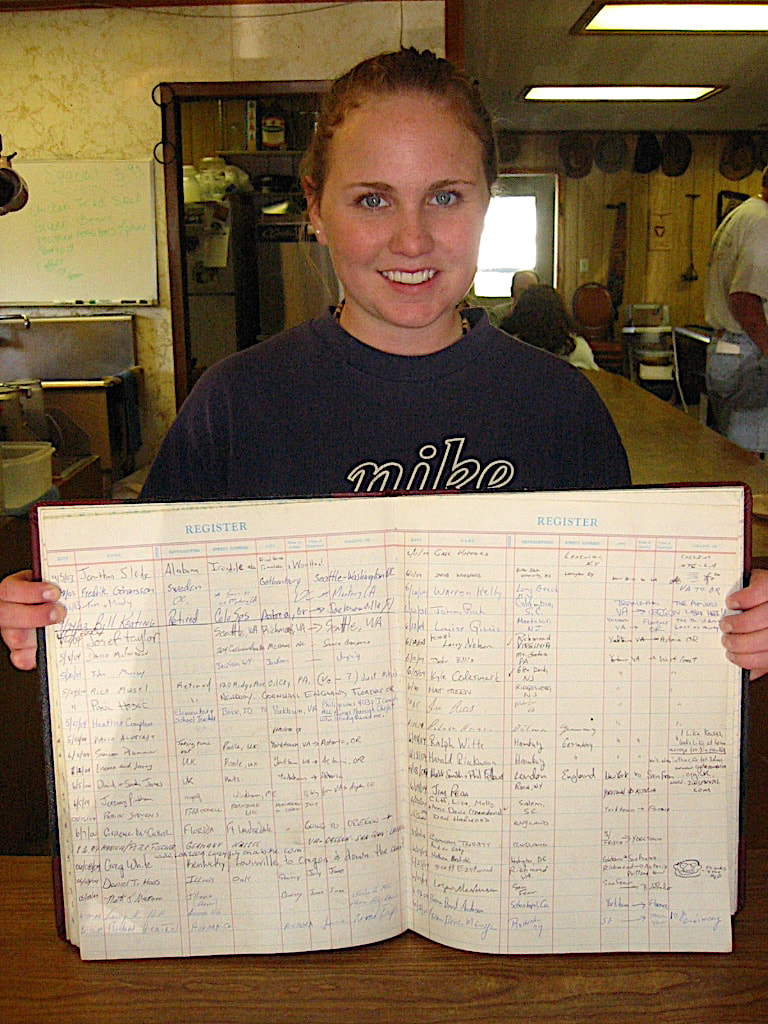 Trans-Am Logbook in Rosalia KS
That evening, we met an English gentleman in the town park of Eureka where we pitched camp for the night after 104 miles. Karen slept little that night due to the kids with noisy cars and fireworks going off all over town. I however, slept thru it all.
​
(- posted from an internet cafe/juice bar in Pittsburg Kansas)
======================================
Tuesday, June 29, 2004 - Day 33 - 89 miles
We awoke to a sticky-wet tent (humidity going sky-high now) and a flat rear tire again. A victim of yesterday's chip-seal, no doubt. We finally caught up and passed a group of van-supported eastbound cyclists that we've been leap-frogging with since Sunday morning. We camped in Walnut and again signed a logbook of cyclists who've visited the "Boots and Saddle" country store where we grabbed drinks and snacks before pitching the tent in the town park. 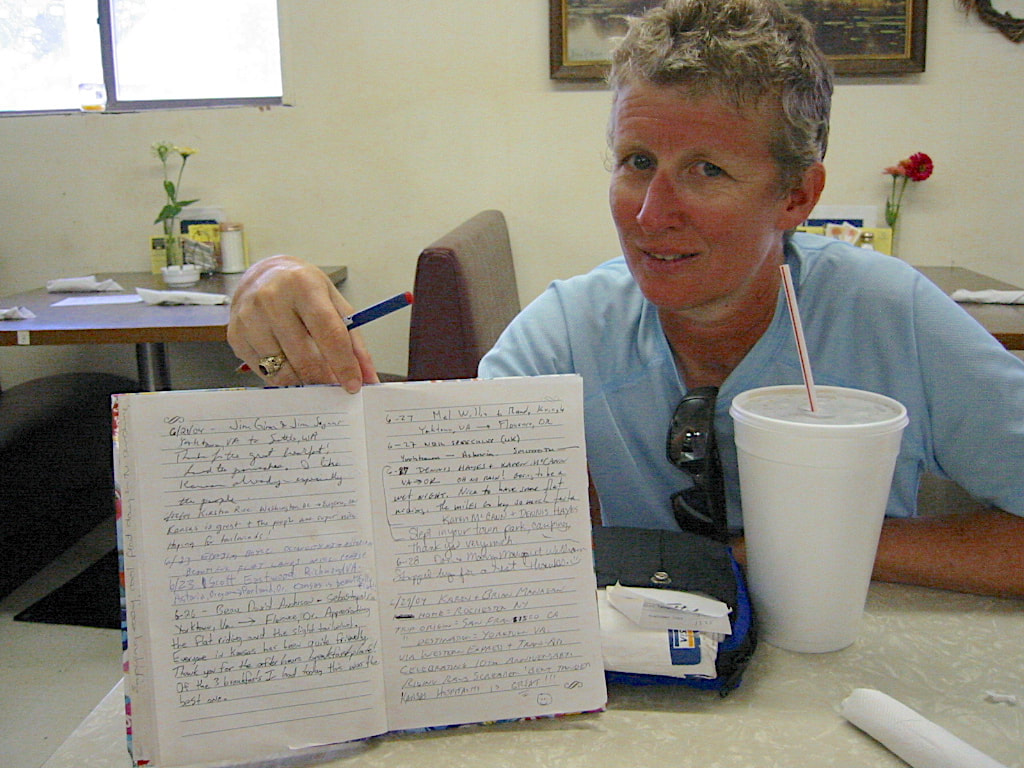 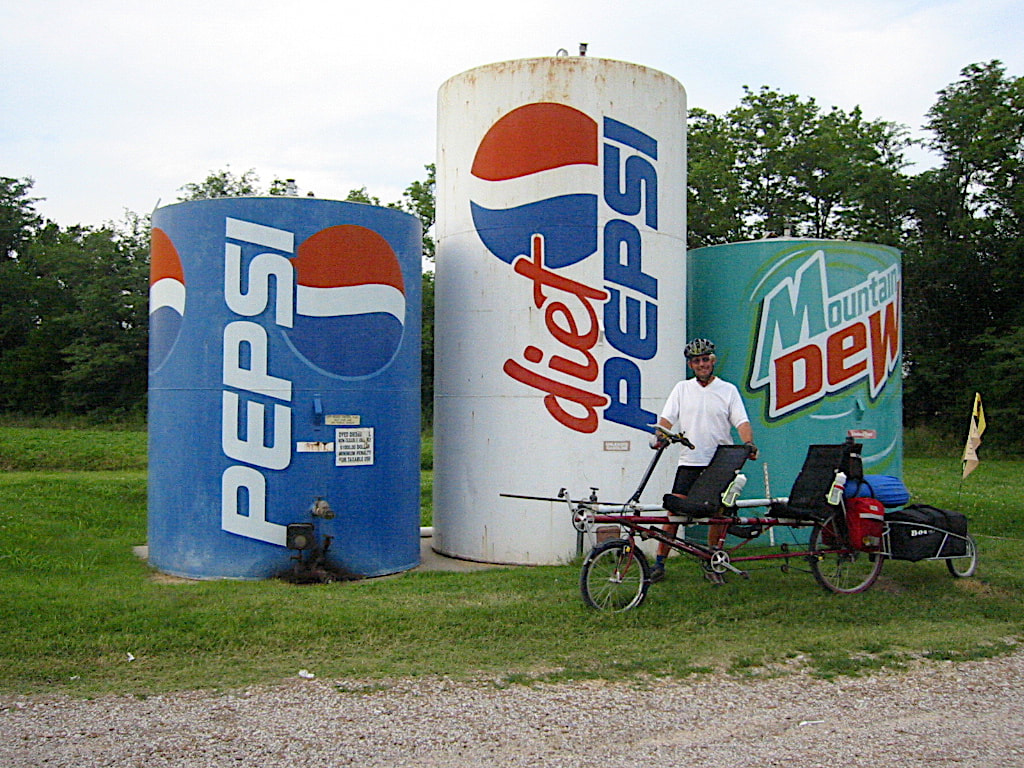 Thirst Quenching!
A few more fireworks kept Karen up (but not me) and we're really feeling the effect of the humidity all night long now. Everything we touch seems wet and clammy ... particularly after no SHOWERS for three days!
​
(- posted from an internet cafe/juice bar in Pittsburg Kansas)
=========================================
Wednesday, June 30, 2004 - Day 34 - 71 miles
Stopped here in Pittsburg to hit bike shops, pick up laundry soap, do the net thing, and call ahead to the bike hostel that we plan to stay in tonight after we cross the border into Missouri and finally say bon-voyage to Kansas!

Today, we finished the 6th of 10 sections of the Adventure Cycling trail maps that we're using. We've covered 2300 miles to date, and figure about 1600 miles to the Atlantic coast. Can't believe we've come so far so fast, and we're already beginning to miss what's behind, while looking forward to what's ahead.

One special note about Kansas ... all along the way, I've been hating the thought of crossing the barren flat lands of Kansas and fighting the headwinds, but to Kansas' credit, we've enjoyed this part of the trip far beyond expectation due to the hospitality and friendliness of everyone we've met here. It's been terrific!!
​
(- posted from an internet cafe/juice bar in Pittsburg Kansas)
=====================
We left Pittsburg Kansas and crossed the state line into Missouri under the constant threat of rain/thunderstorms. We managed yet again to skirt by the big stuff and only get damp from sprinkles and road spray. 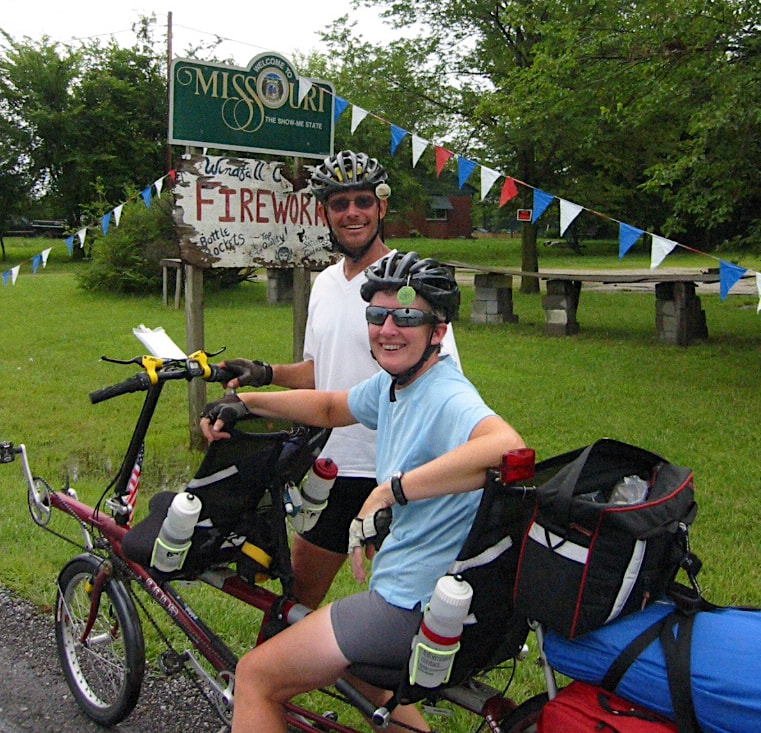 We met a group of 4 cyclists (westbound) who had heard about our coming their way. The Trans-Am Trail grapevine moves fast. 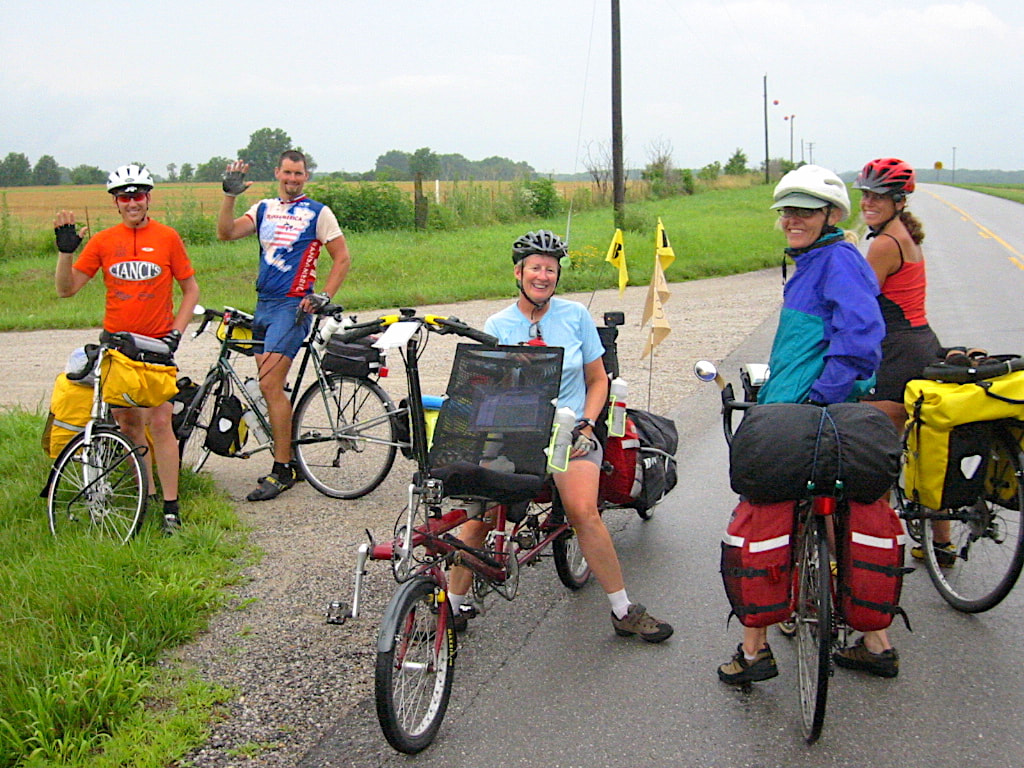 We were told that when we arrived in Golden City Missouri, that we should check in with the staff at Cooky's restaurant and they would summon the owners of the bike hostel that was just around the corner. 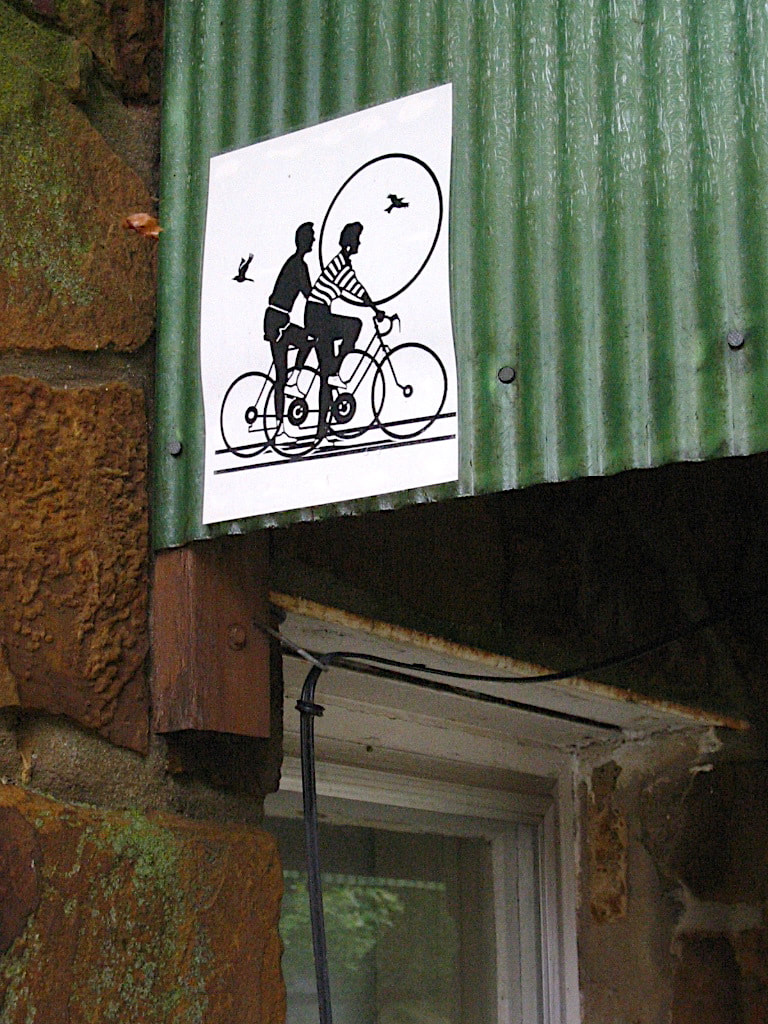 We did, they did, and we ended up in a really cool old stone house with SHOWERS, laundry, warm and dry beds, and even an air conditioner that served well to dry out our tent and sleeping bags that were still damp from the humidity from the prior night's campout in Kansas. 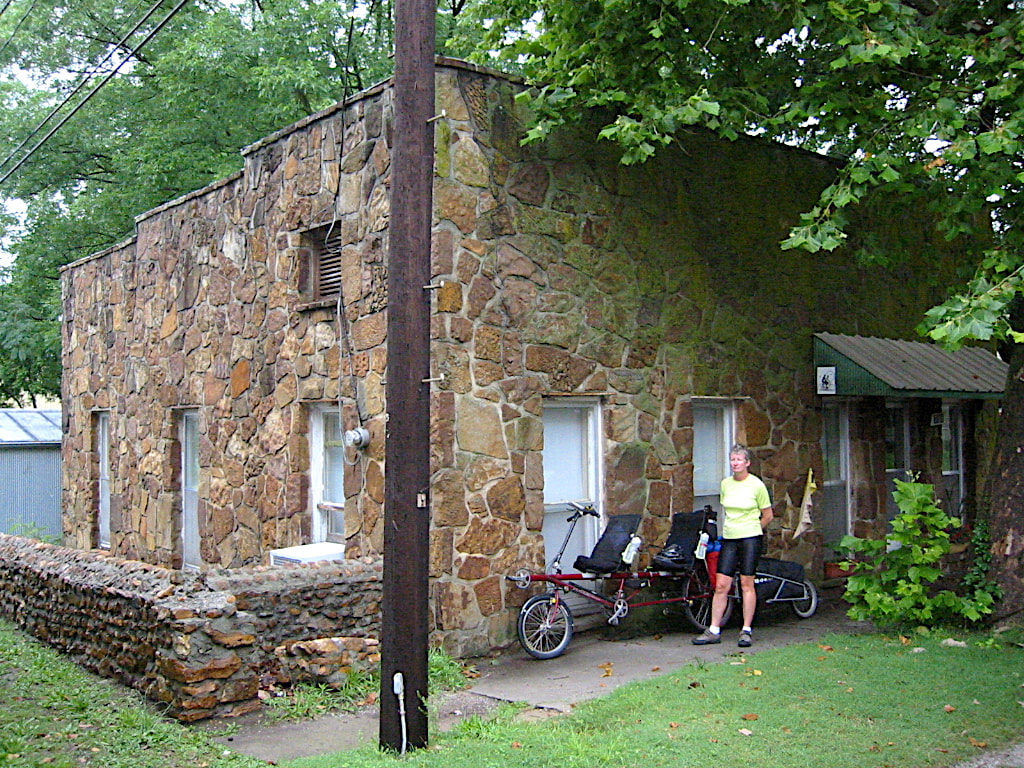 Postnote - I just realized after working on this at home that we actually went through 3 straight days of hot sticky weather in Kansas without showers. Can you even IMAGINE how wonderful this place is to Trans-Am bikers?