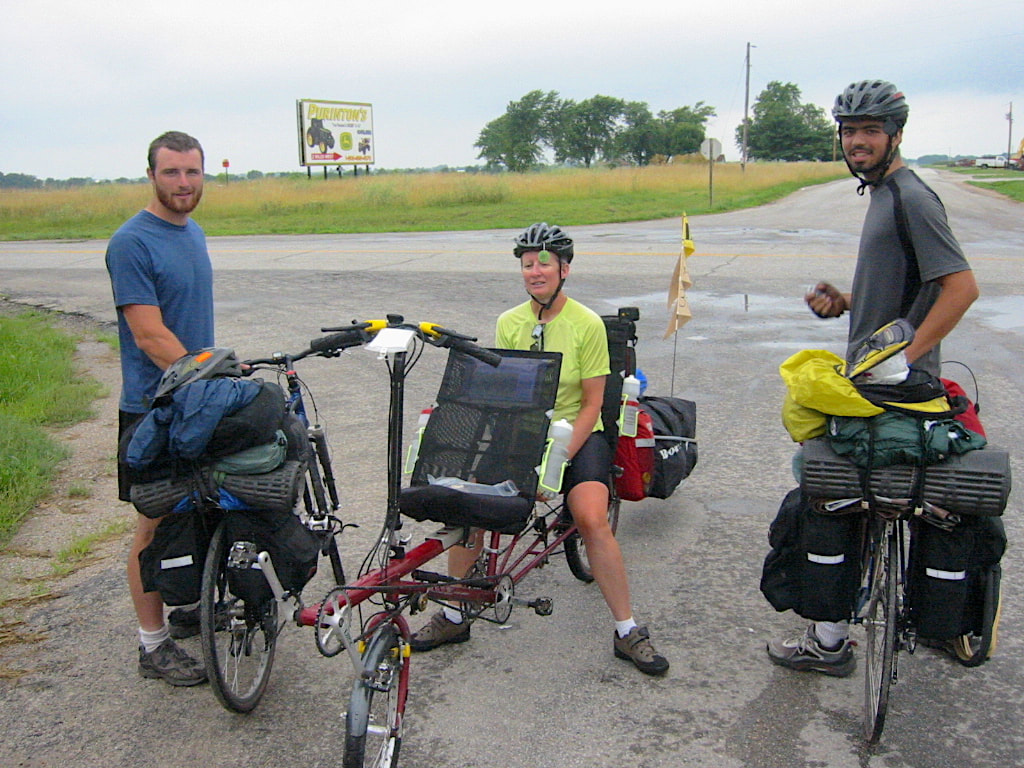 More Westbounders on the TransAmerica Trail
No matter ... it was going to be a short day anyway, since our destination was only 53 miles away at the home of Tommy and Rene ... members of TCA (Tandem Club of America) who offered hospitality for the evening. The weather improved in the afternoon, and we were greeted by Tommy on the road, who rode out to escort us to his home. At his home, we met Rene, Scott, and the kitties, one of whom (the kitties ... not Rene or Scott!) who loves to play fetch. We had a great meal, SHOWERS, and a wonderful evening of chat with Tommy and Rene. They own a BEAUTIFUL Co-Motion tandem in a silver/green fade that I absolutely LUSTED over! Hmmm... perhaps the next paint scheme for our Bilenky/Sterling?
​ 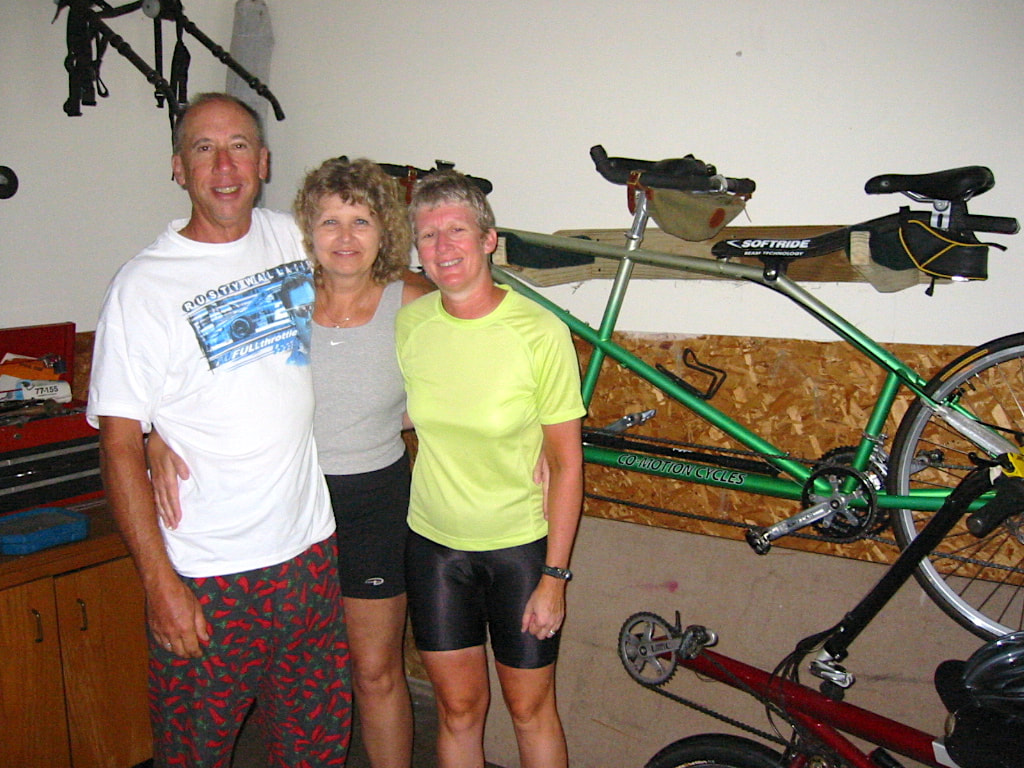 Our hosts: Tommy and Rene, Tandem Club of America
Thanks for the inspiration Tommy, and thanks for the WONDERFUL hospitality. Are you originally from Kansas, or has the Kansas hospitality spilled over into Missouri?
​
(- posted from the Marshfield Missouri public library)
==================================
Friday, July 2, 2004 - Day 36 - 60 miles
We left Tommy and Rene's place at 7am and immediately noticed big storm clouds in our path. We arrived (still dry) in Fair Grove and got the news from the folks in a c-mart that a BIG storm was headed our way. Well ... what can we do but ride on and take our chances? We did, and by staying just behind the storm, we managed to get into Marshfield still dry.
​ 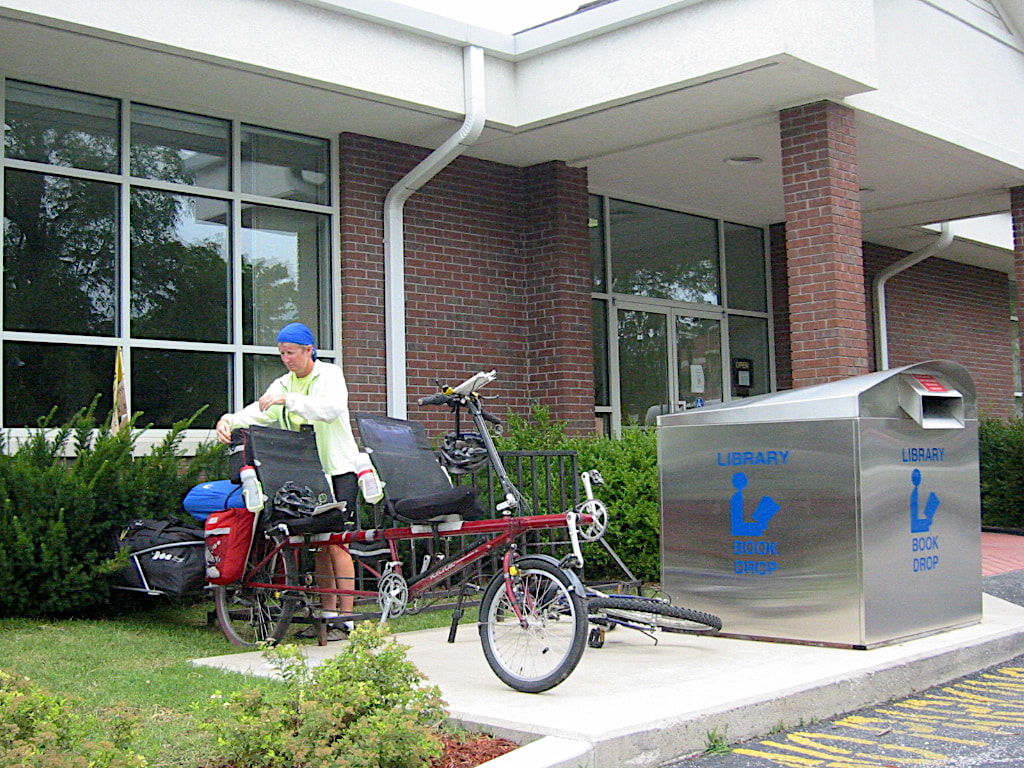 Marshfield Public Library ... Blog Stop!
Had lunch, stopped in here at the public library to update the blog, and we're only planning to do another 26 miles to Hartville today, because there's a loooooong stretch to the next town after Hartville with camping available. After that, opportunities abound and we should be able to pick up daily mile totals if the roller-coaster hills and rainy weather don't stop us first. 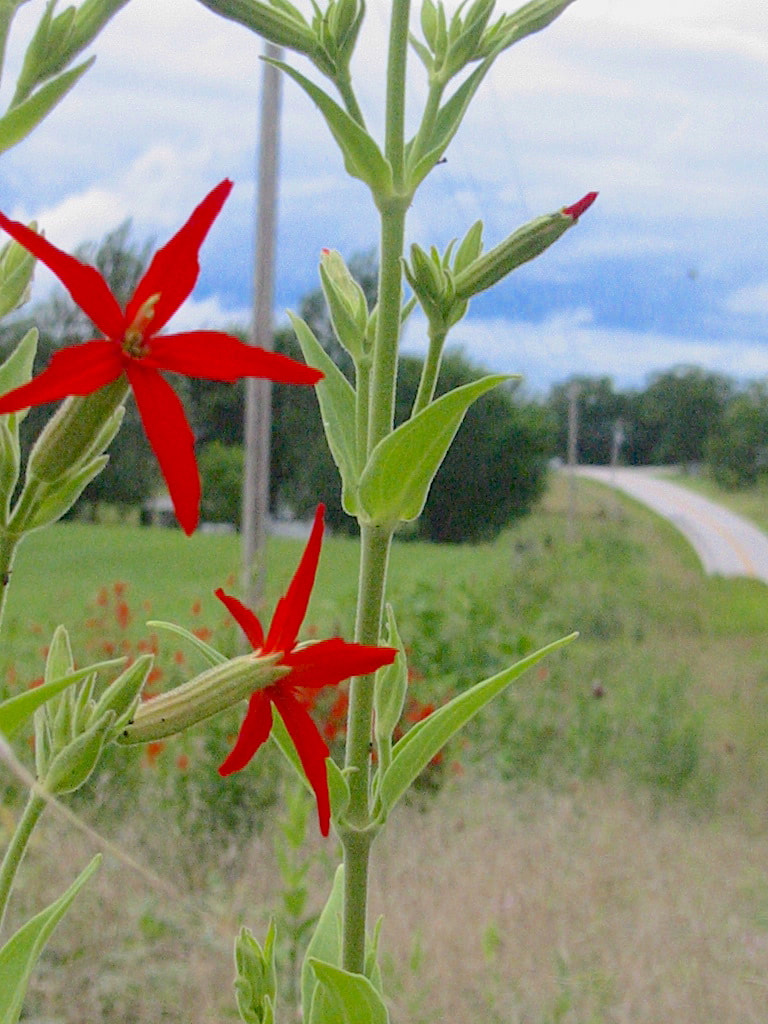 (- posted from the Marshfield Missouri public library)
=====================================
Saturday, July 3, 2004 - Day 37 - 78 miles
We arrived in Hartville MO yesterday afternoon, quite early actually. We managed 60 miles before calling it quits for the day due to limited camping availability in the next 30-40 miles. We stayed dry all day until we got here, then the skies opened up on our little tent all night long. We were OK, but the tent was almost floating on a river. As we're in the public library here, the tent is flipped over like a turtle getting dried out. Interesting ... we camped on the courthouse lawn, and inside is the sheriff's dept, the library, jail, and restrooms. When we pulled in last night and asked about camping, we were told that bikers camp here all the time, and if we liked, we could sleep inside the hallways of the courthouse. Quaint, 'eh?

We'll see how far we get today ... weather radar looks OK for the moment, but pop-up showers and t-storms are the norm. Missouri is known for it's huge aquifers, caves, and natural springs ... one of which pumps over 80 million gallons a day into the Jack's Fork River ... and it's all aimed at US!
​
(- posted from the Hartville Missouri public library Saturday morning, before leaving Hartville)
We left Hartville Missouri after updating the blog, and immediately started to hit the big hills of the Ozarks. Up/Down/Twist/Turn/Up again/Down again/Twist and Shout! Wheee! We met more westbounders (mostly complaining of the hills in the Ozarks ... go figure!) but not much more happened today. Just up/down all day long.
​ 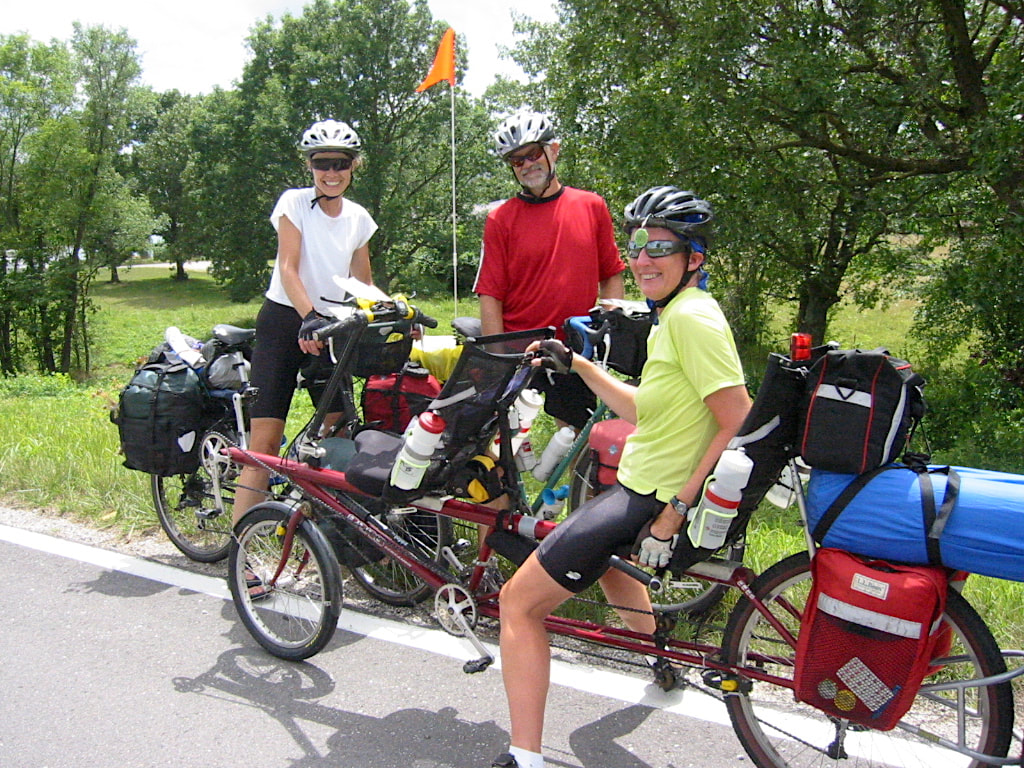 Small world story: We met Barb and Tom on the road and realized we're all from Rochester. THEN discovered that Barb went to school with a doctor Karen works with. We later found out that Tom passed away sometime after.
We arrived at Ally Spring (81 million gallons a day!) in the late afternoon, and caught a slight rain shower. The old mill and the spring are really beautiful. You'll have to see the video.
​ 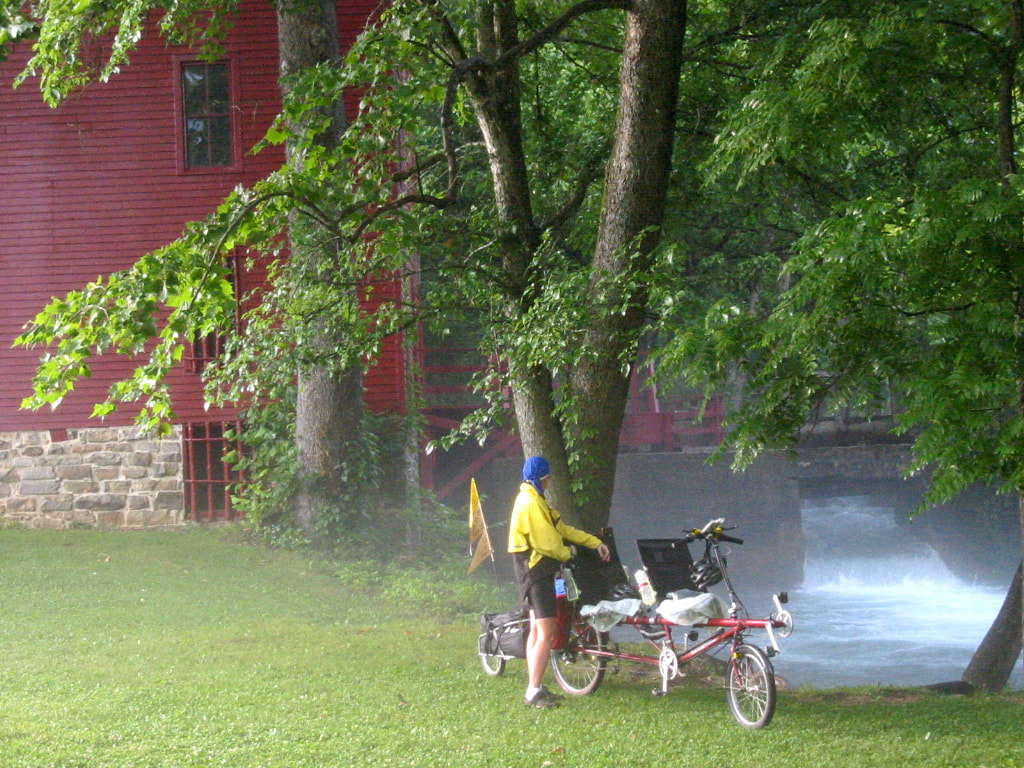 We had breakfast in Eminence, a cute little touristy town w/Bed and Breakfasts, arts and crafts stores, and a good buffet at the diner. We stopped early today to camp at Johnson's Shut-Ins State Park, Missouri's 3rd most visited park ... for good reason. The Black River runs thru it, and a series of geologic events created a natural waterpark/playground in the river.
​ 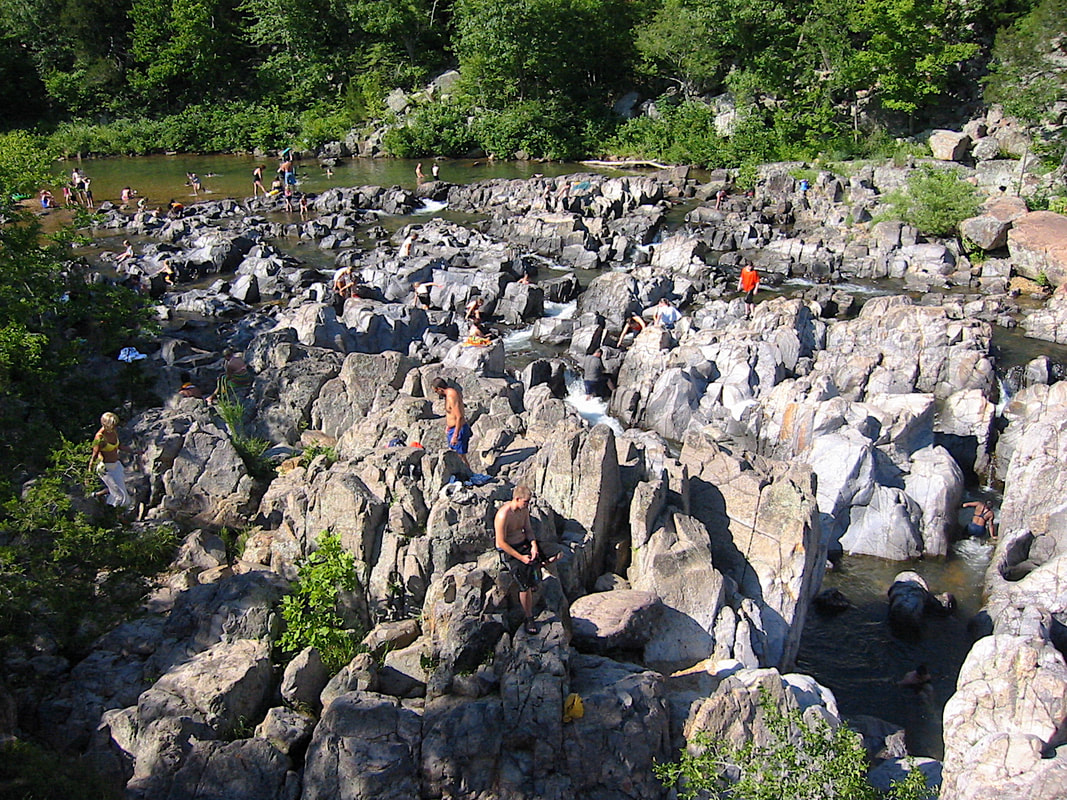 We didn't get into the tricky part (Karen's fragile ankles, ya know), but we DID enjoy the river a bit upstream. I chased tadpoles and crawdads, while Karen enjoyed just cooling off. Oh ... we actually started detecting TAILWINDS again for the first time since Tribune Kansas!! We did laundry, had SHOWERS, and enjoyed a mostly quiet evening at camp. Nice place!! Highly recommended.
​
(- posted from the Carbondale Illinois public library, 7/7/04)
====================================
Monday, July 5, 2004 - Day 39 - 85 miles
Started the day in moderate spinkles (not real rain yet), and have started moving out of the tough part of the Ozarks, and down toward the Mississippi river basin. We met several other westbounders today, including a father/daughter team riding another Rans Screamer.
​ 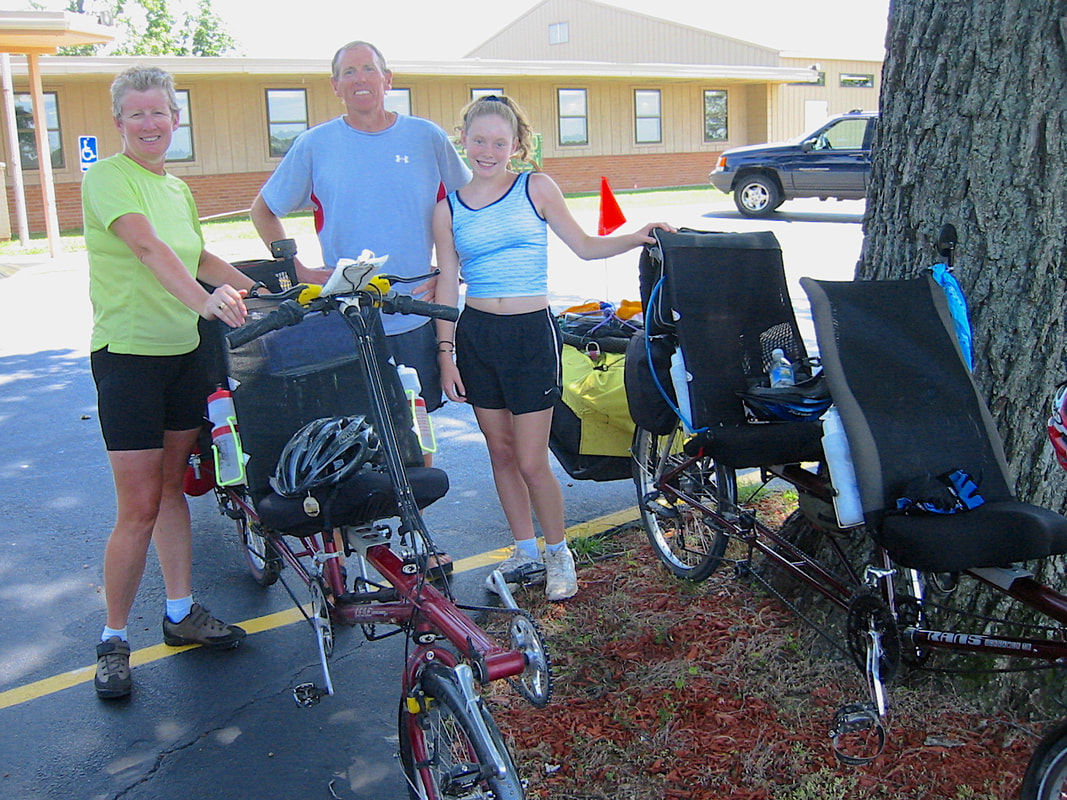 We crossed the Big Muddy into Illinois at Chester ...
​ 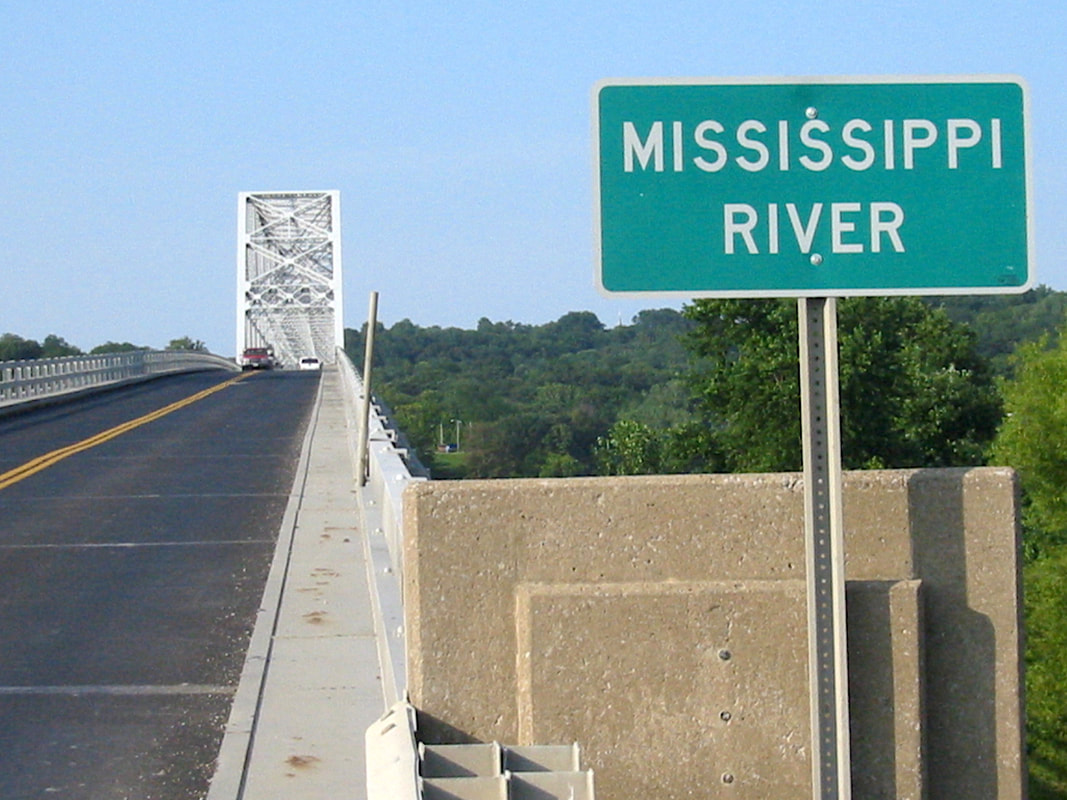 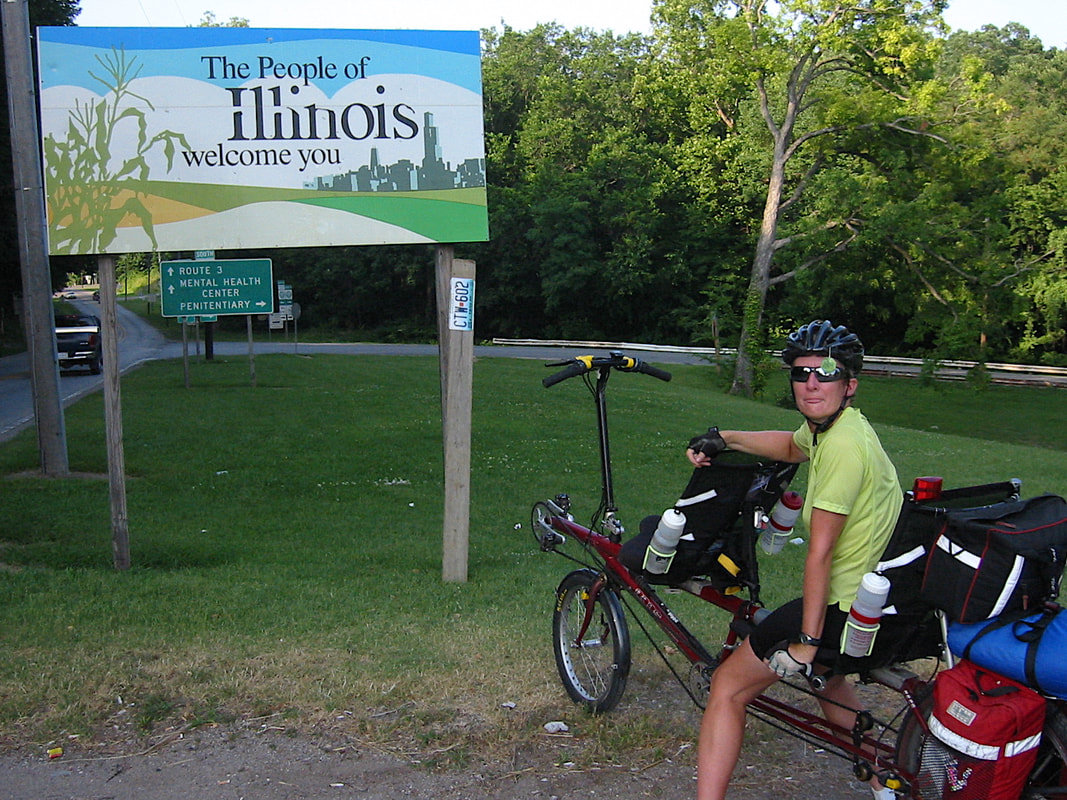 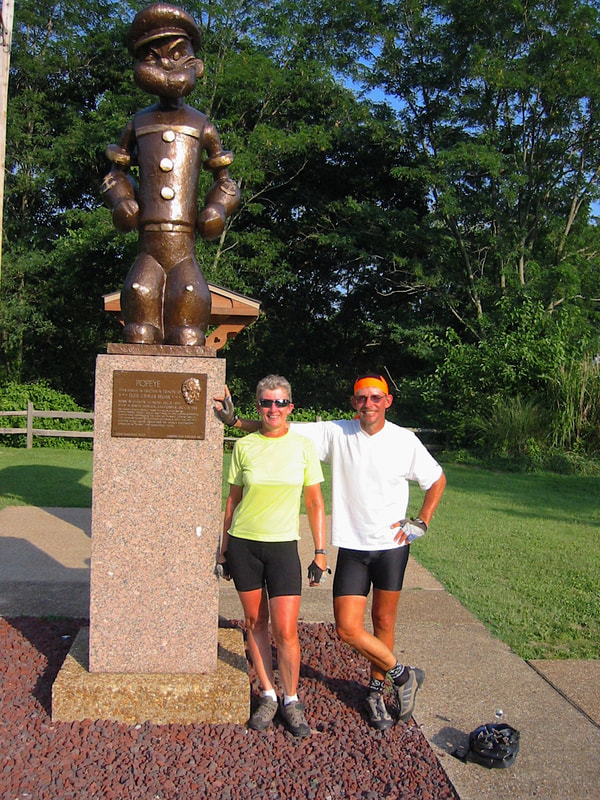 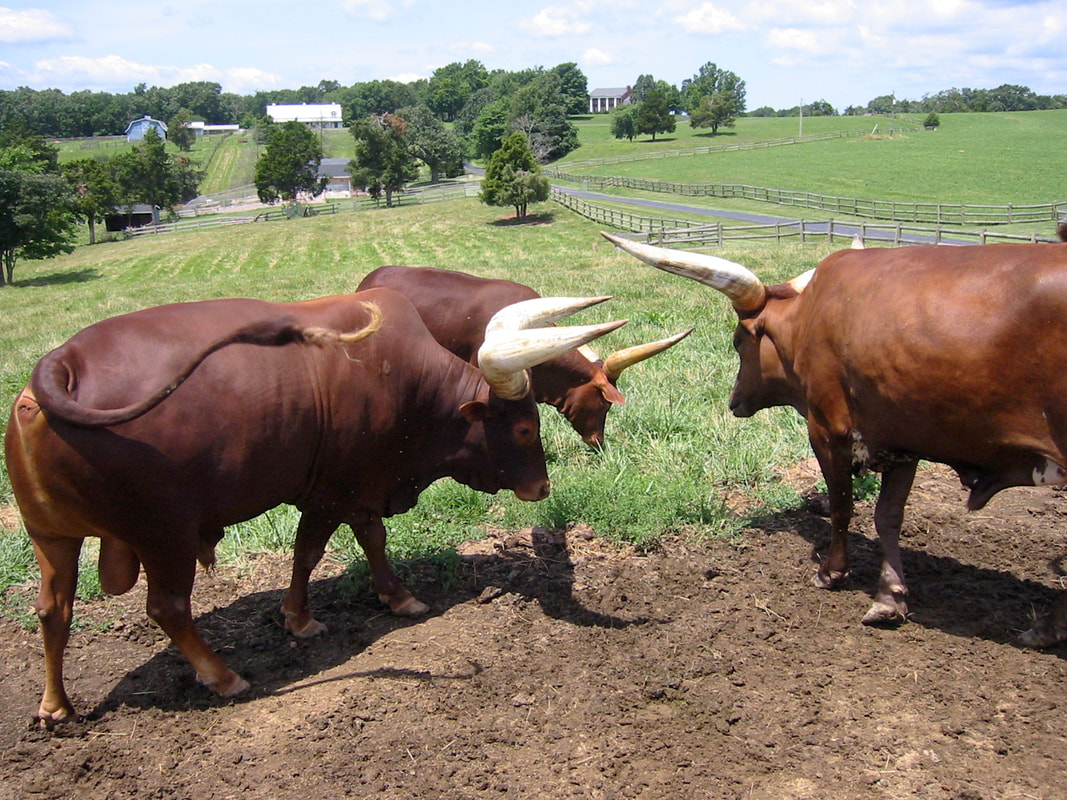 We also discovered the "Tunnel Hill State Trail", a rail-trail that runs about 40 some miles and features a wonderfully preserved rail tunnel that we HAD to visit, of course.
​ 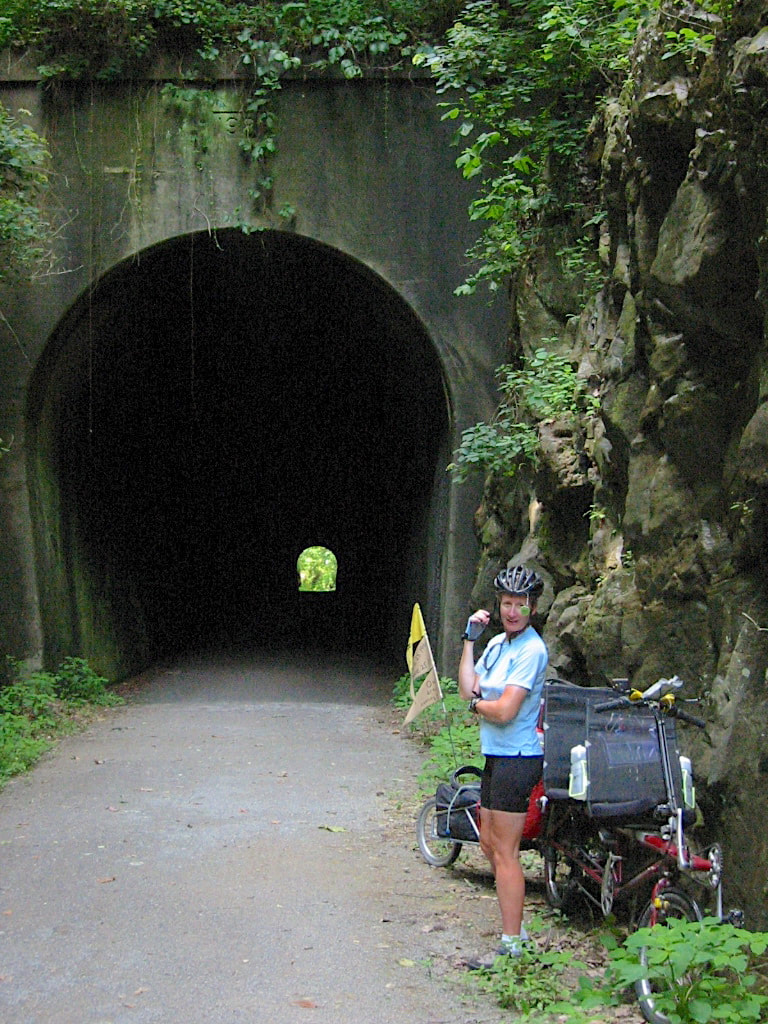 We called it a day at the Bear Branch horse camp outside Eddyville, which is close to the Ohio river. Hot and humid, and tailwinds are WITH us!
​
(- posted from the Berea Kentucky public library, 7/12/04)
=====================================
Thursday, July 8, 2004 - Day 42 - 72 miles
Broke camp early and headed for the river. Cruised into the Tower Rock Recreation Area in hopes of finding easy access to Tower Rock (160 feet above the water) but no luck. Required a hike up a trail (a no-no for Karen's ankles!). Getting OUT of the park was a task ... Karen measured a climb of 16% on the road out. Later that day, I started noticing problems with my hip. Hmmmm.... We visited Cave-In-Rock State Park in the town by the same name, and I tried getting photos of the cave entrance that has a history of murderous river pirates using it to steal cargo from merchants on the river. Interesting place.
​ 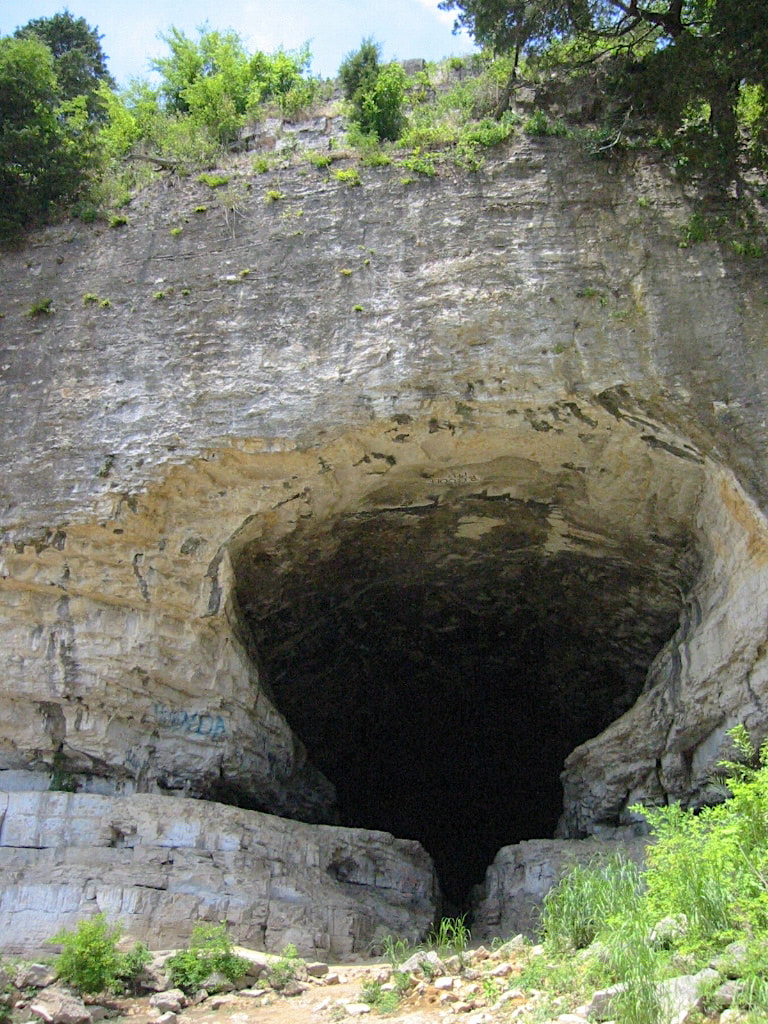 After a nice vanilla shake (hey, this trip isn't ALL health food ya know!), we boarded the ferry ...
​ 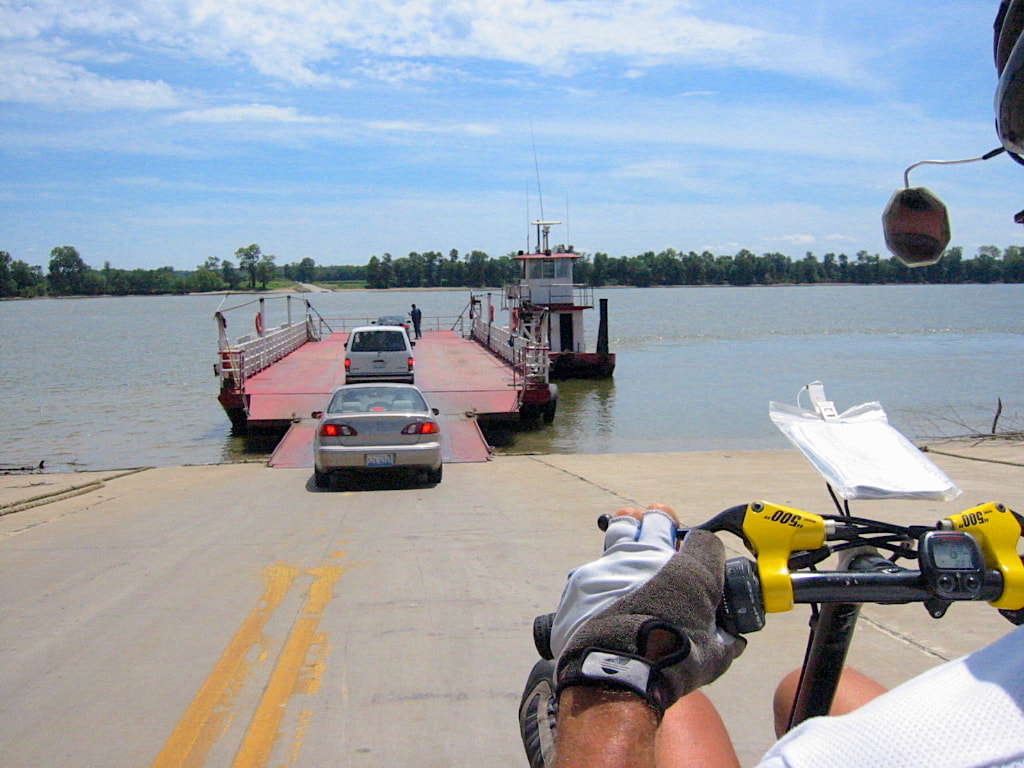 ... and crossed the Ohio River into Kentucky.
​ 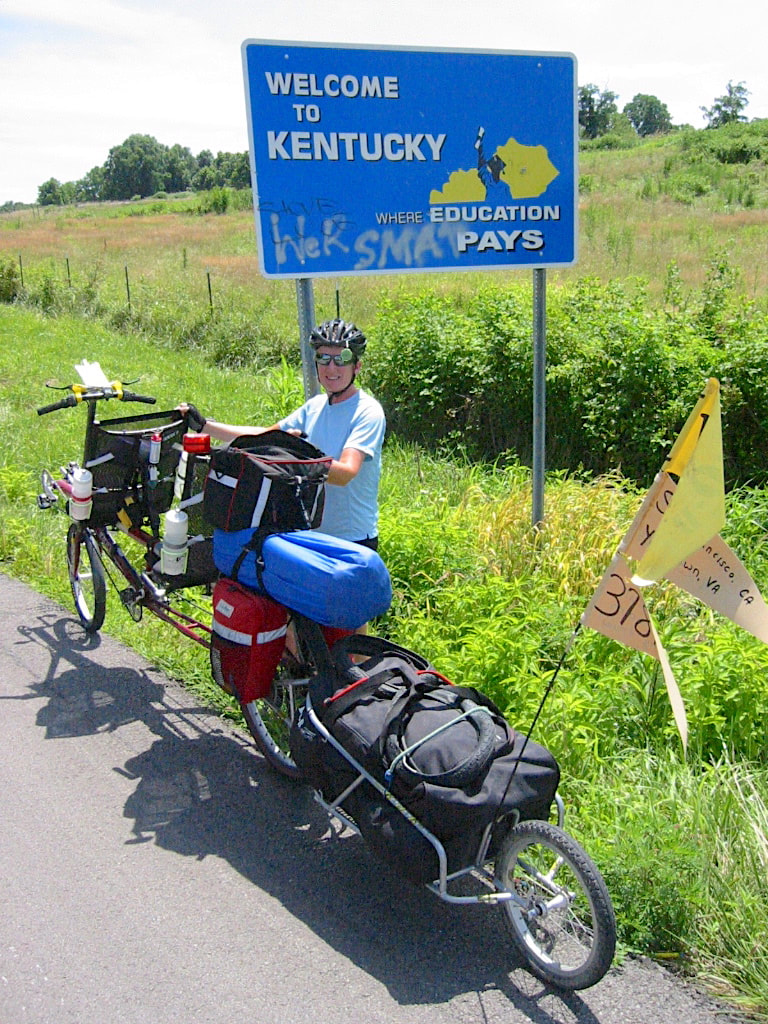 You think so, 'eh?
The roads here are GREAT and VERY hilly in this section. Great fun. We made it to Clay Kentucky that evening and locals pointed us to the minister of the local Methodist church who offers shelter (and SHOWERS) for bikers on the trail. Another DRY night! Another hot and humid day, but we got 72 miles even with the delays in Illinois.
​
(- posted from the Berea Kentucky public library, 7/12/04)
​