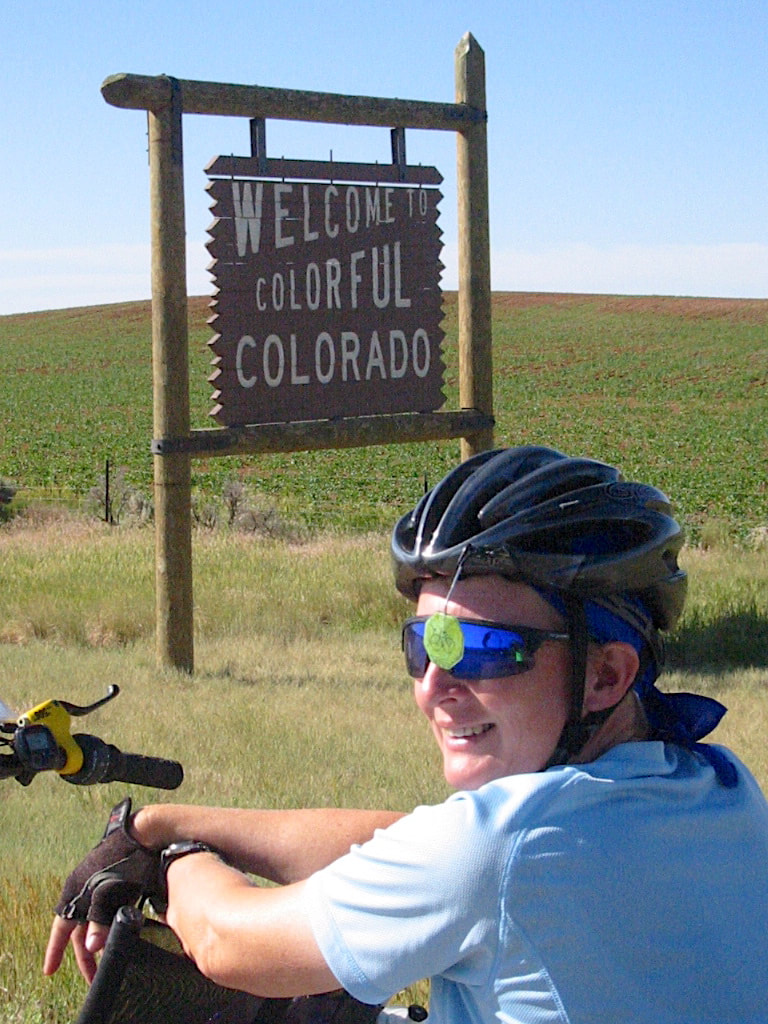 We're about to start the climb to Lizard Head Pass (10,200') in just a few minutes. We hope to knock off at least a few hundred feet from the 3500' we have to climb before mid-day tomorrow, in order to reach Telluride by nightfall. We'd like to hang out there for a while.
(- posted from Delores Colorado public library - Wednesday afternoon)

We left Delores and headed uphill toward Lizard Head Pass, getting about a 20 mile head start that afternoon. We found a campground about 1/2 way between Stoner and Rico. 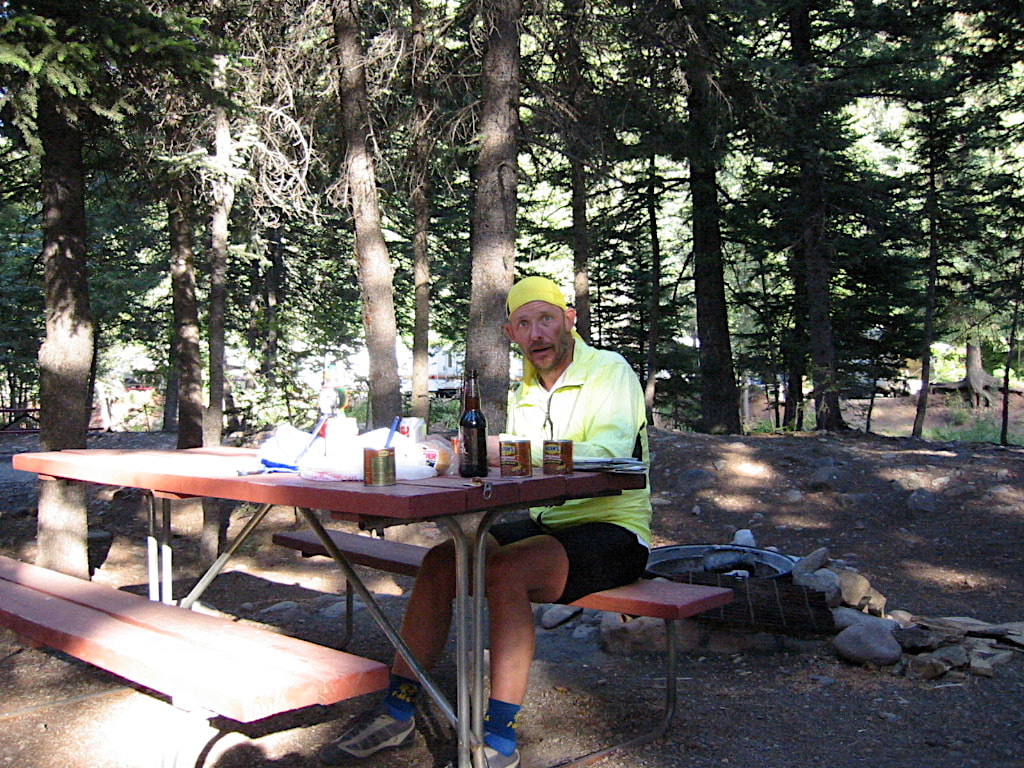 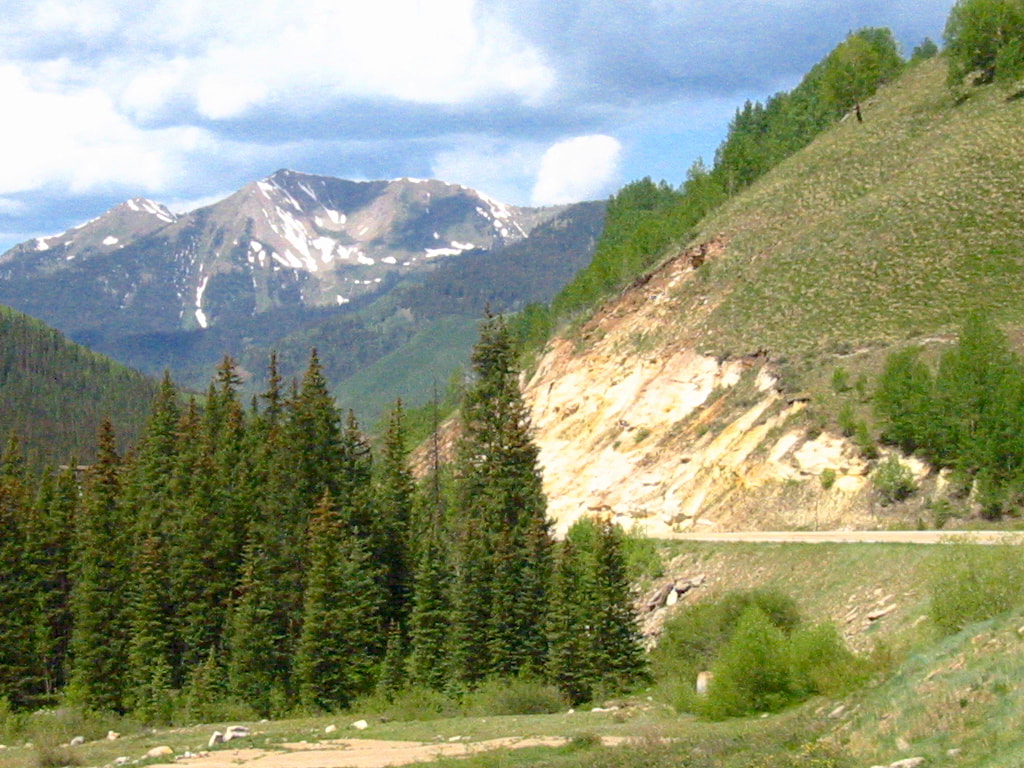 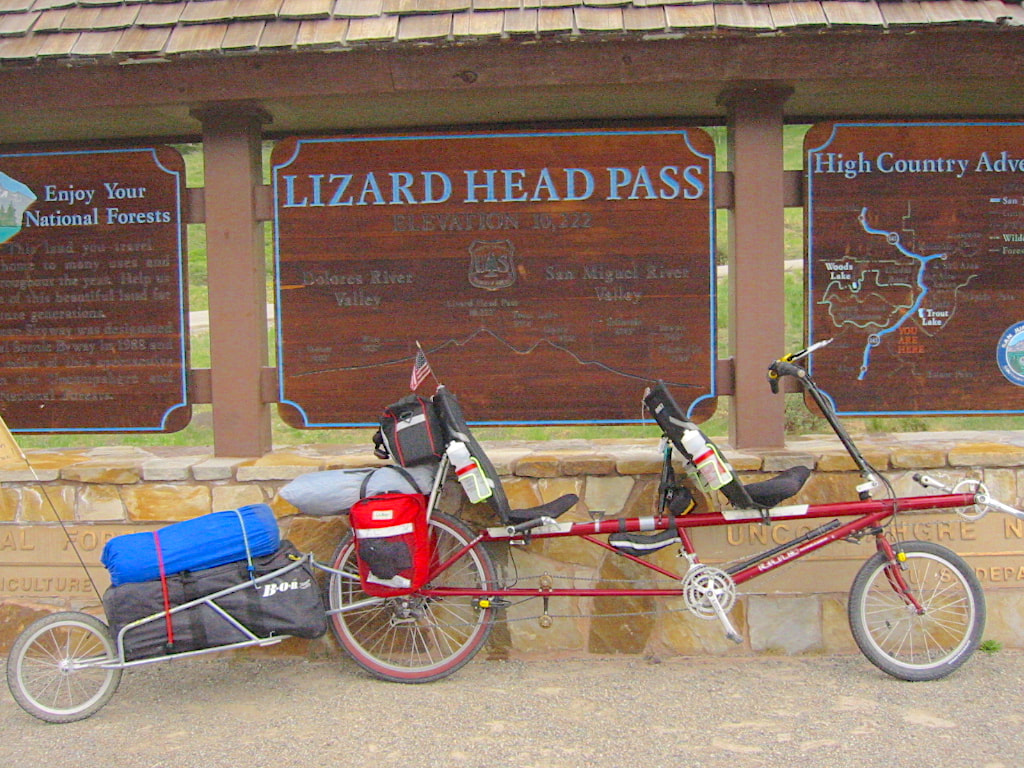 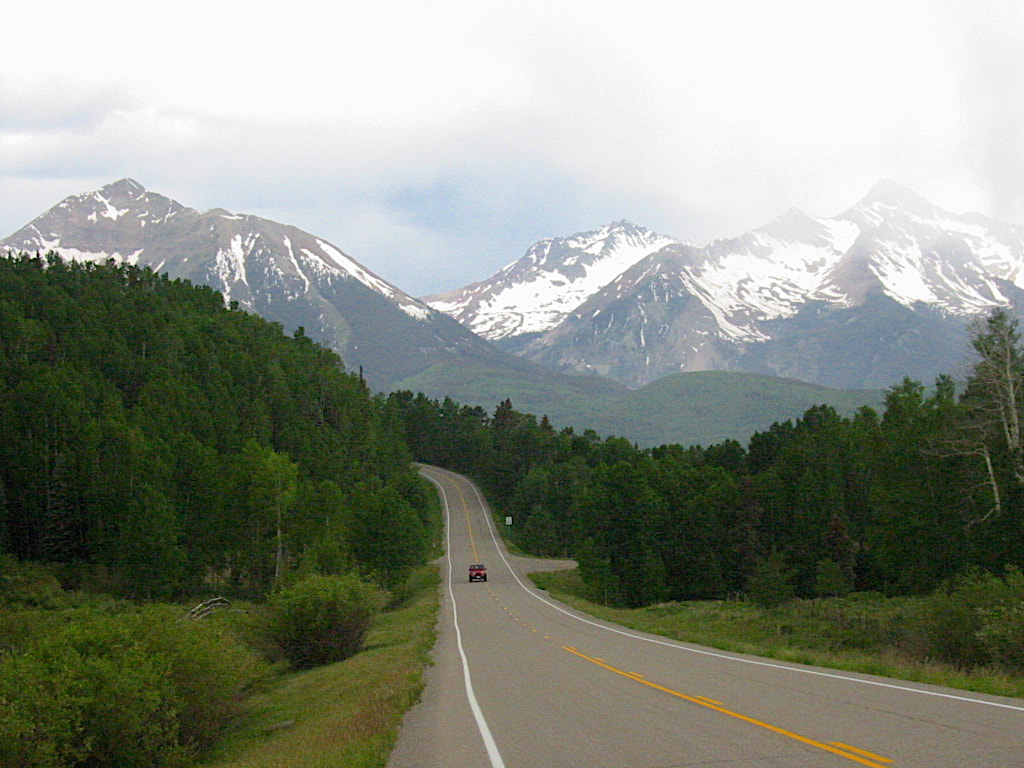 Headed for Telluride!
​
Waited out a passing storm going thru the mountain pass before heading down toward Telluride, and saw some of the most beautiful snow-capped mountain scenery so far this trip. When we arrived at the junction to Telluride and tried to call around for a room to stay in at Telluride, we discovered that Telluride was having it's biggest event of the year - an annual Bluegrass festival that draws about 20,000 visitors a year. So ... the cheapest rooms available were running $200 a night! Well, I guess I didn't REALLY want to see Telluride THAT much. ( Postnote: We DID get to Telluride years later on another adventure. Details to be posted later in another journal! ) So, off we went in search of camping further down the road. And lucky us ... we found a FREE BLM (Bureau of Land Management) campsite just a mile off the highway about 9 miles downhill from To-Hell-U-Ride.
​
(- posted from Gunnison Colorado public library)
====================================
Friday, June 18, 2004 - Day 22 - 77 miles
Left the camp at Sawpit and started another climb up Dallas Divide (8970') and had a terrific ride down into Ridgeway. 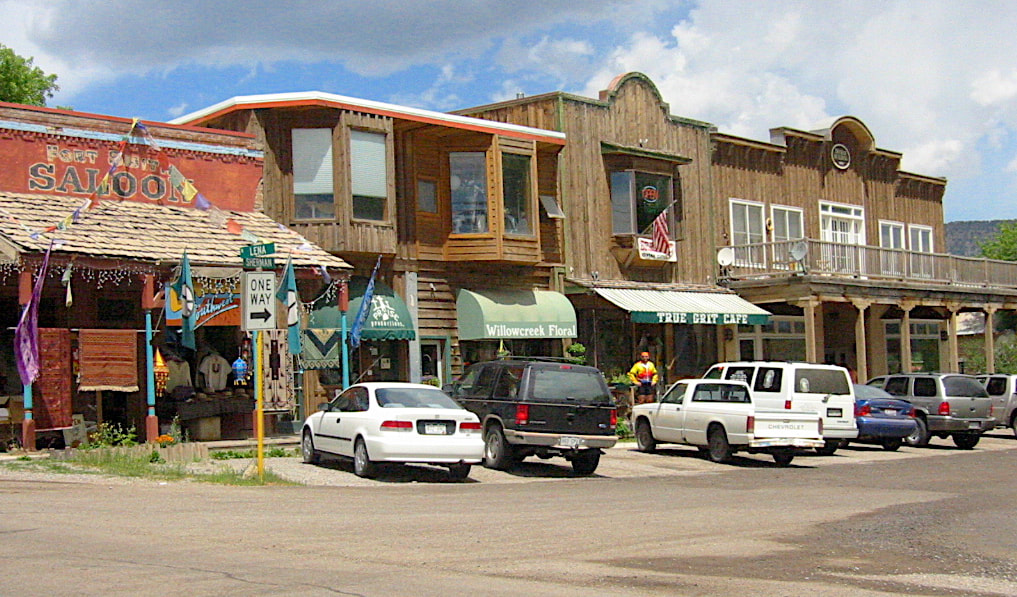 This is one very cool old western town that has been revitalized w/o getting hokey with the western theme. The streets are all dirt, the buildings are all original, but everything is VERY nicely done. We agree this is our favorite town on the whole trip. (So far!) We followed a storm from there into Montrose ... pausing and timing our speed so as not to get CAUGHT in the storm, but just watching it pass. Worked! To get just a few more miles out of the day, we did "just one more pass" over Cerro Summit to arrive in Cimmaron late in the day. The owner at a small grocery called ahead and got us a tent site at a campground just 3 more miles down (UP) the road. Nice place, hot SHOWERS, ... ahhhh.
​
(- posted from Gunnison Colorado public library)
=======================================
Saturday, June 19, 2004 - Day 23 - 76 miles
Left the "Pleasant Valley" campground a bit late (9:00am) and got over yet another pass (Blue Mesa Pass 8500'). 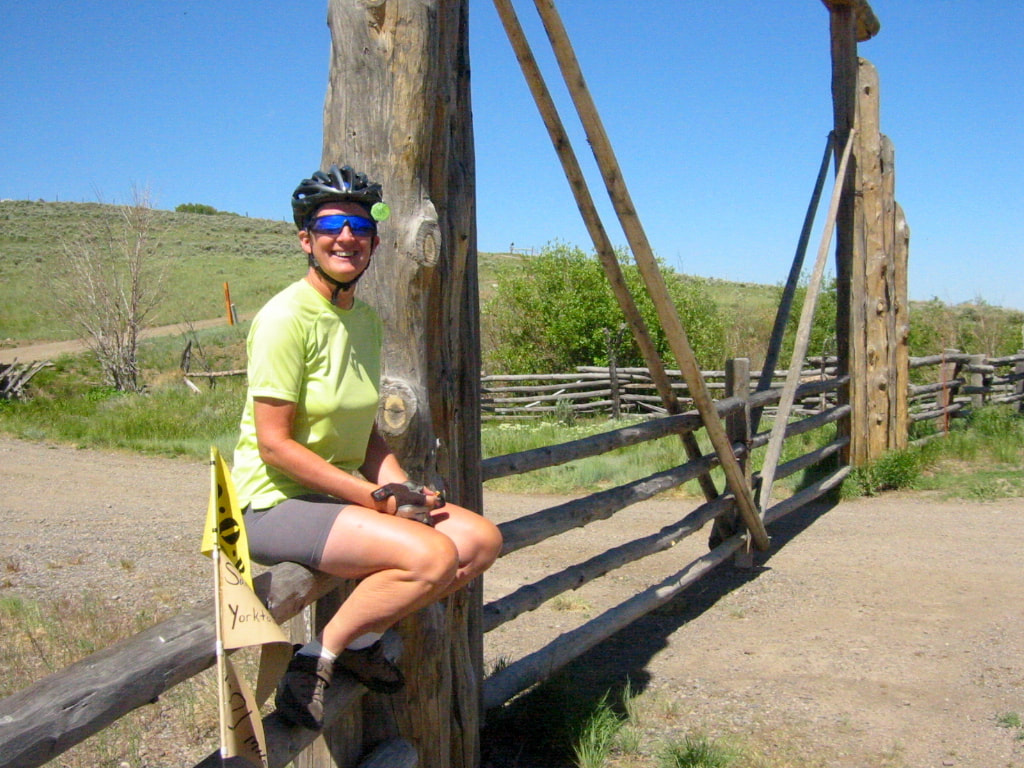 We picked up GREAT tailwinds from there thru the Black Canyon of the Gunnison River ...
... and all the way to here in Gunnison where we pigged out at a pizza joint and stopped here at the public library. We plan to go a few more miles today before resting prior to tomorrow's climb: Monarch Pass - 11,312' - our highest climb on the entire trip, and over the Continental Divide! Wish us luck!

On Saturday (Day 23), we finished the day in Sargents, just at the base of the climb to Monarch Pass. About 76 miles. It was nice having the tailwinds, but it was an uphill grind most of the day. 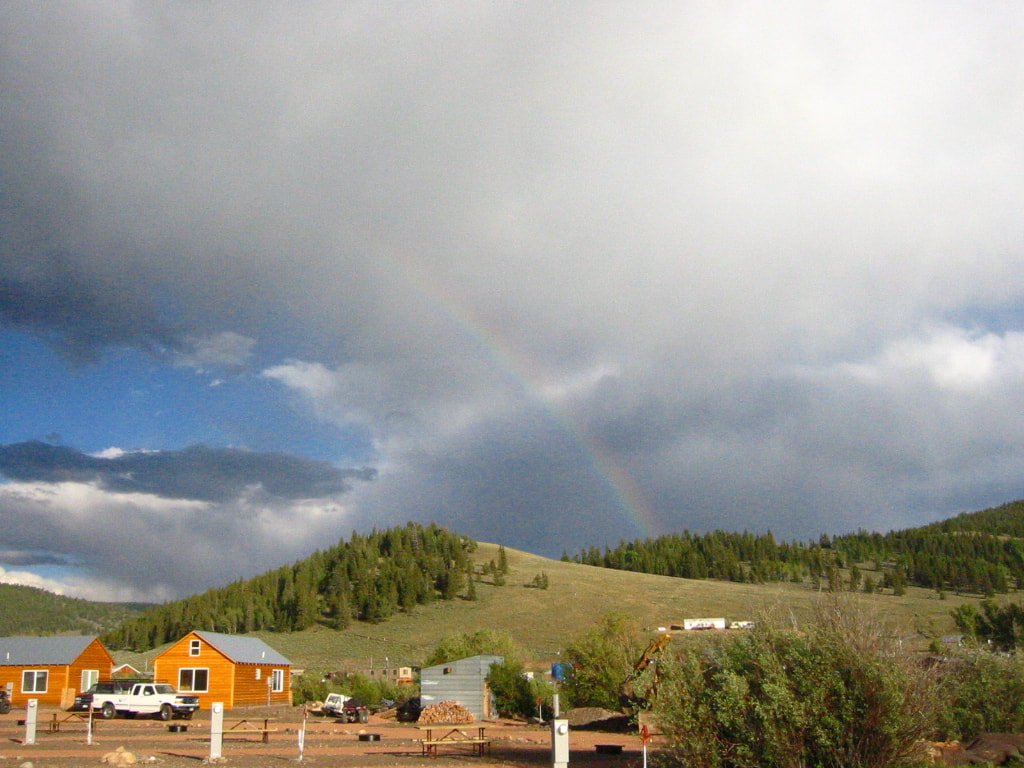 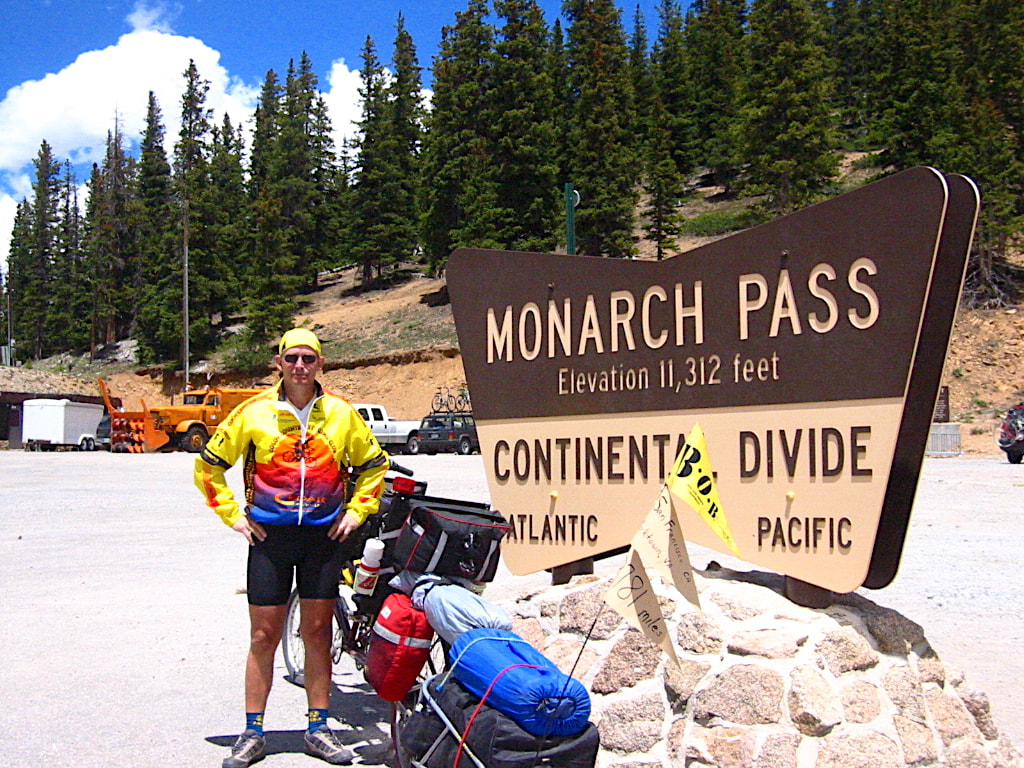 ...and we took the opportunity to ride a cable car to the mountain top to view the panorama of mountain ranges. 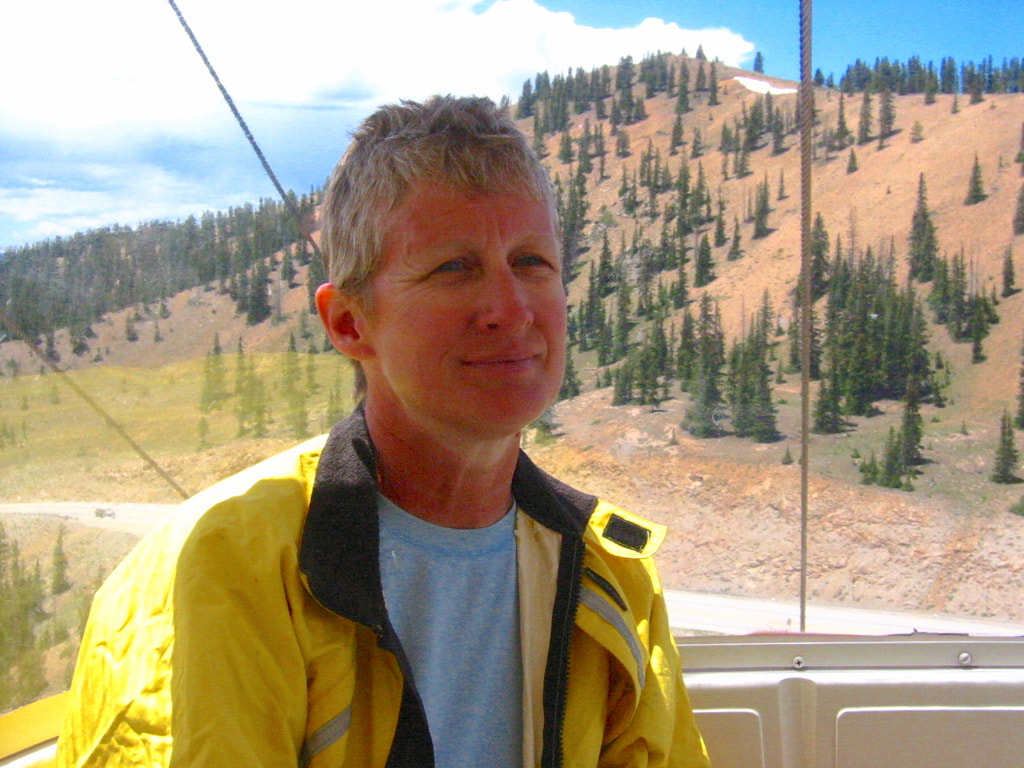 Someone has seen a lot of sunshine ...
​ 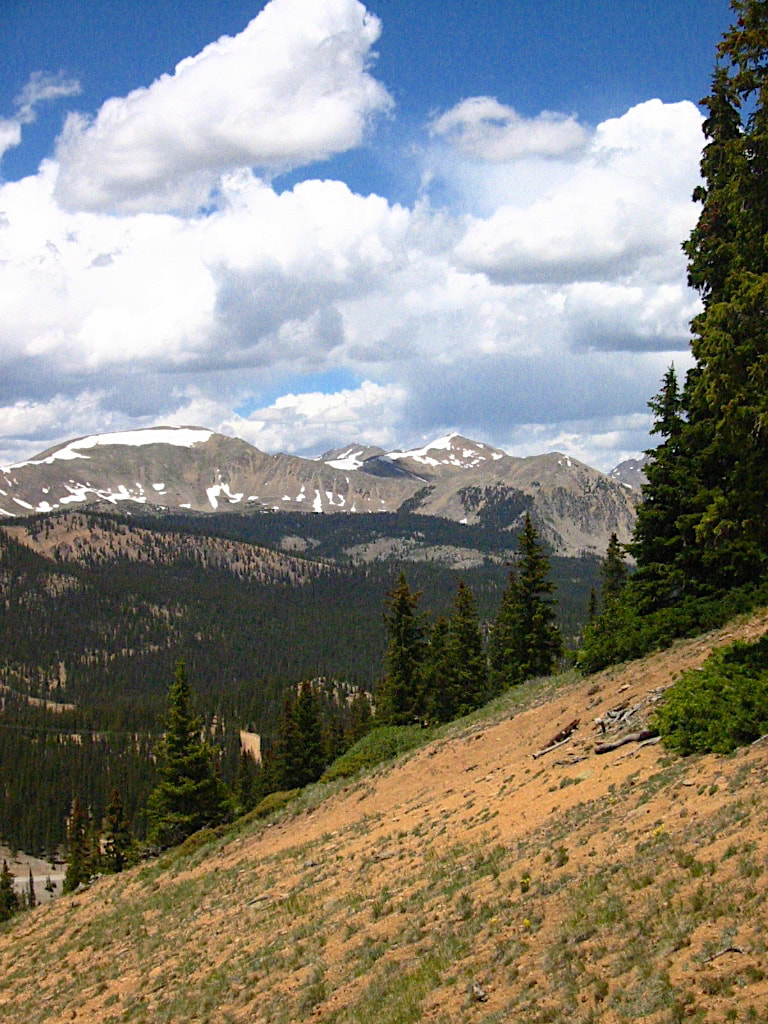 It's all downhill from here.
​
Leaving the summit, we had a motorcade of cars and trucks following us down the sweeping turns and switchbacks ... at 40-50 mph for over 10 miles before it started to level off!!! (That was fun!) :-) We had lunch in Salida (old historic mining town) and finished the day at a campground near Cotopaxi. 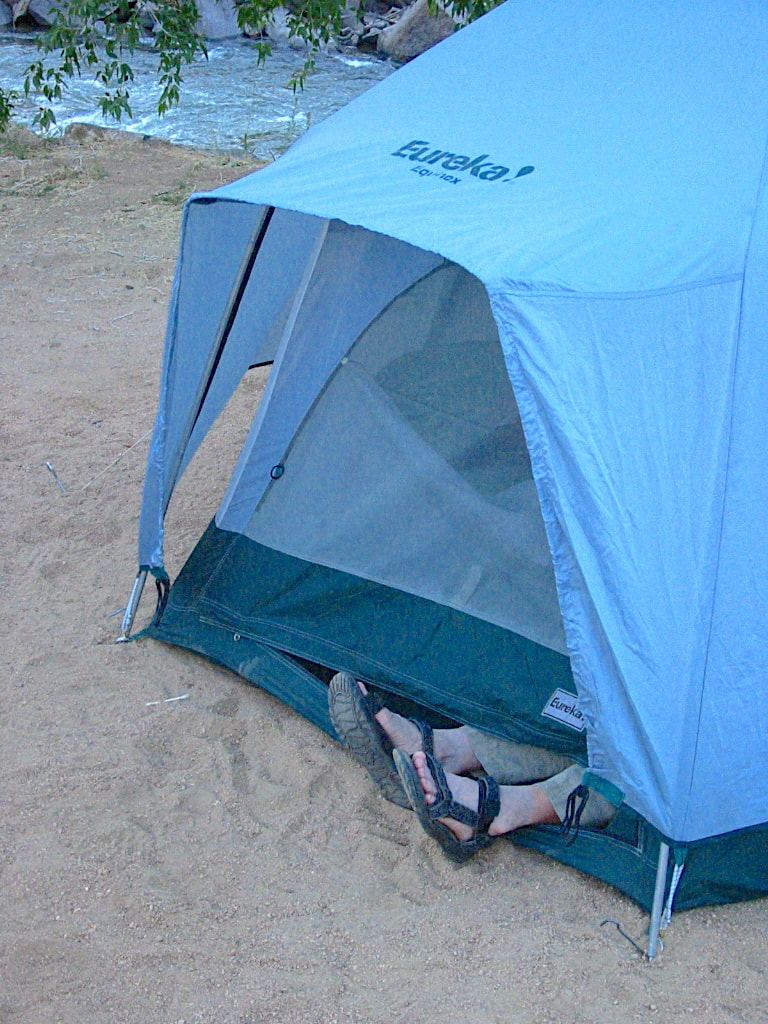 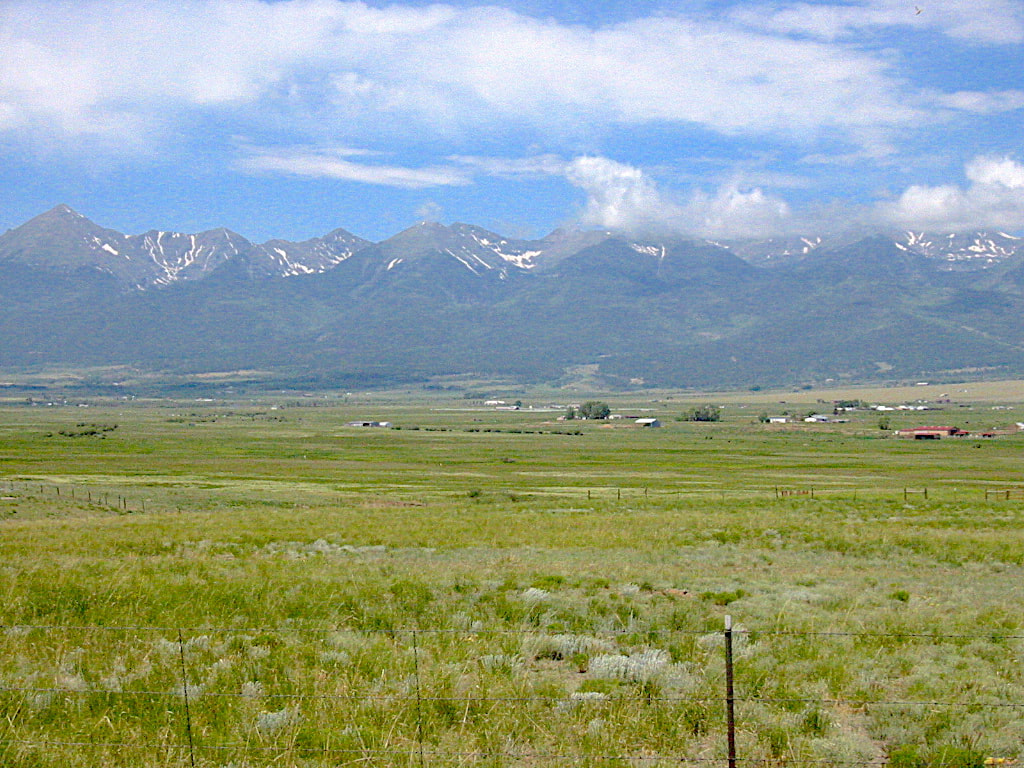 ... the clouds moved in and we faced headwinds, crosswinds, and eventually ... thunder and lightning storms. As we did before, we paused for a spot to allow a big one to pass by us, but we still got a bit wet (and VERY cold) going down the eastern slope. 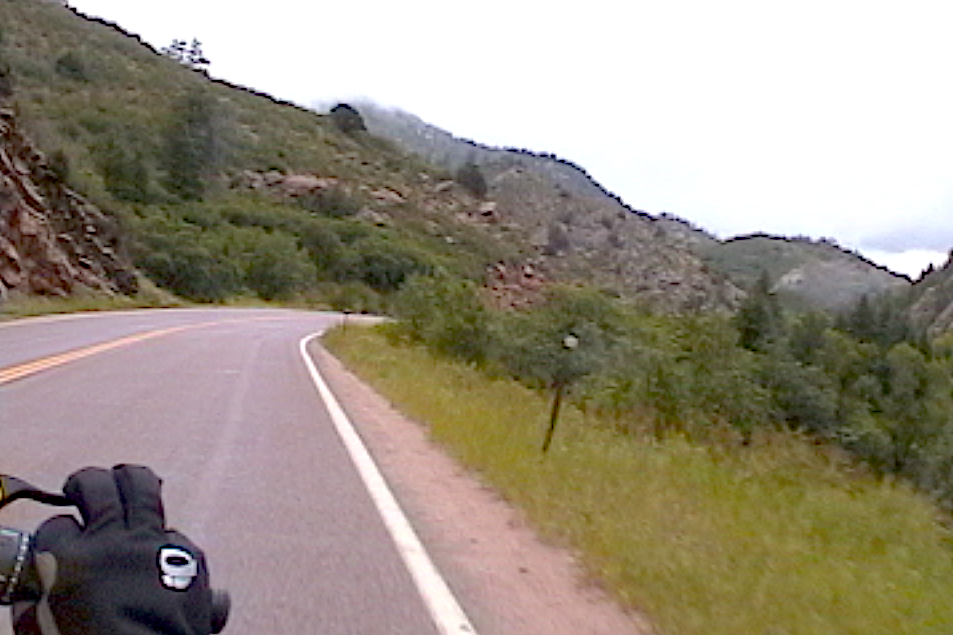 We hit the grasslands at the base and continued toward Pueblo, only to get caught in a much bigger storm (with VERY threatening lightning) that DID get us. We arrived at our next host's home looking like drowned rats at about 6pm, after 84 very tough miles. Hot showers saved me (bcm) from mild hypo, (Karen runs a bit hotter than me) and the temps here were VERY unusual for June. We were only in the 50's, but we're told that 95-100 degrees is "normal" here this time of year, and that June has been the coldest June here in recent memory. Just our luck?
​
(- posted from Eric and Nancy's home in Pueblo Colorado)
=============================================
Tuesday, June 22, 2004 - Day 26 - 8 miles, rest day.
So today, (Tuesday), we're taking a layover day to warm up, do some bike maintenance, hit the post office and run other errands. We're staying with a wonderful family (Eric and Nancy and their gang) right now ... 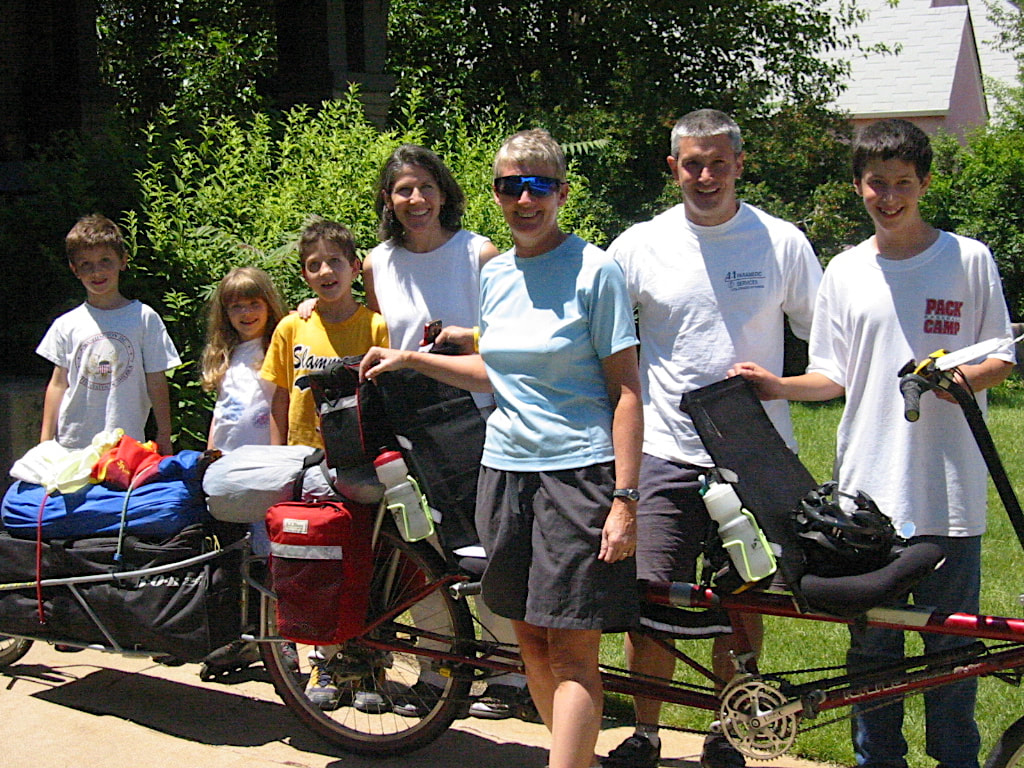 ...and will go to visit Don and Nancy later today. We'll be back on the road tomorrow to take on the next phase of the trip: the plains of eastern Colorado and Kansas. Temps and humidity will start climbing from here on, but the flatness of the plains might actually be a pleasant break from the constant grinds in the mountains of the west. Tailwinds! (we hope!)
​
​(- posted from Eric and Nancy's home in Pueblo Colorado)
​
Sorry for the long disappearance. We've been moving across eastern Colorado and western/central Kansas with little net access availability. Backing up to Pueblo ... We last wrote from Eric's house. We took a rest day in Pueblo, did some errands, and Eric escorted us over to Vance's Bicycle World, where his buddy (and now OUR BUDDY) Vance did a bang up job getting out bike's drive train cleaned up and freeing up the rear shifting which got totally clogged up in the sand and rain from the prior day's downpour. Vance ... a MILLION thanks for squeezing us in and getting us back on the road. It's working better than new after another 400 miles! After leaving the bike shop, we moseyed over to Don and Nancy's place for our second night stay in Pueblo. Don and Nancy built a beautiful retirement home and were very kind to share their home, dinner, and the next day ... an escort out of Pueblo! 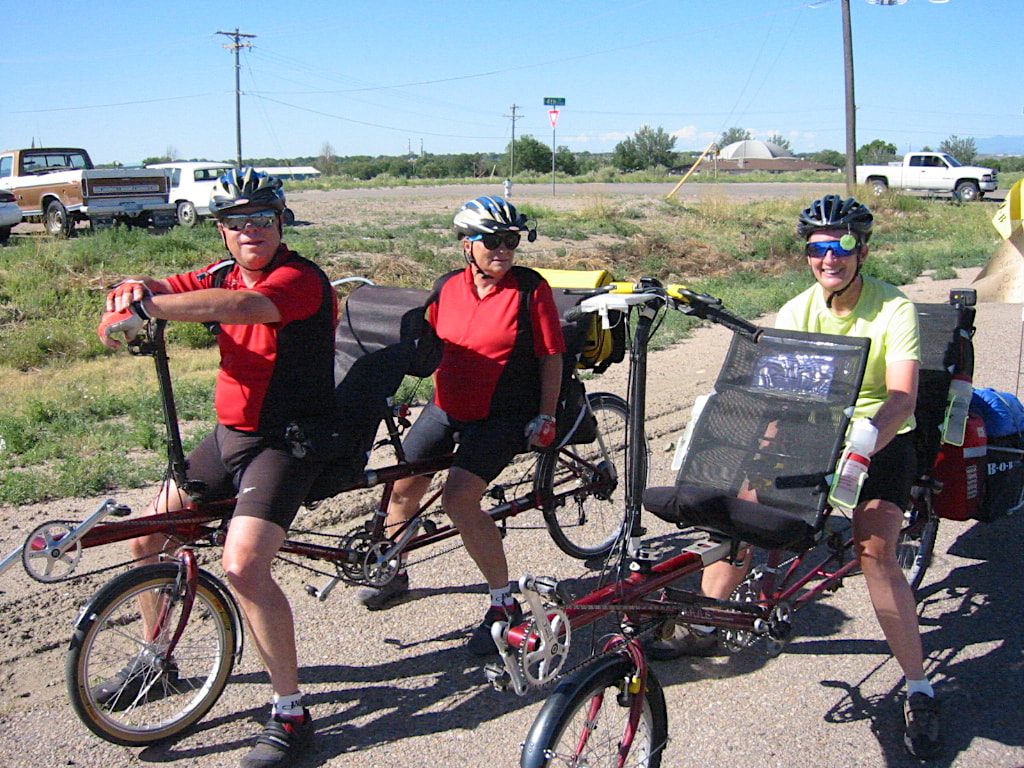 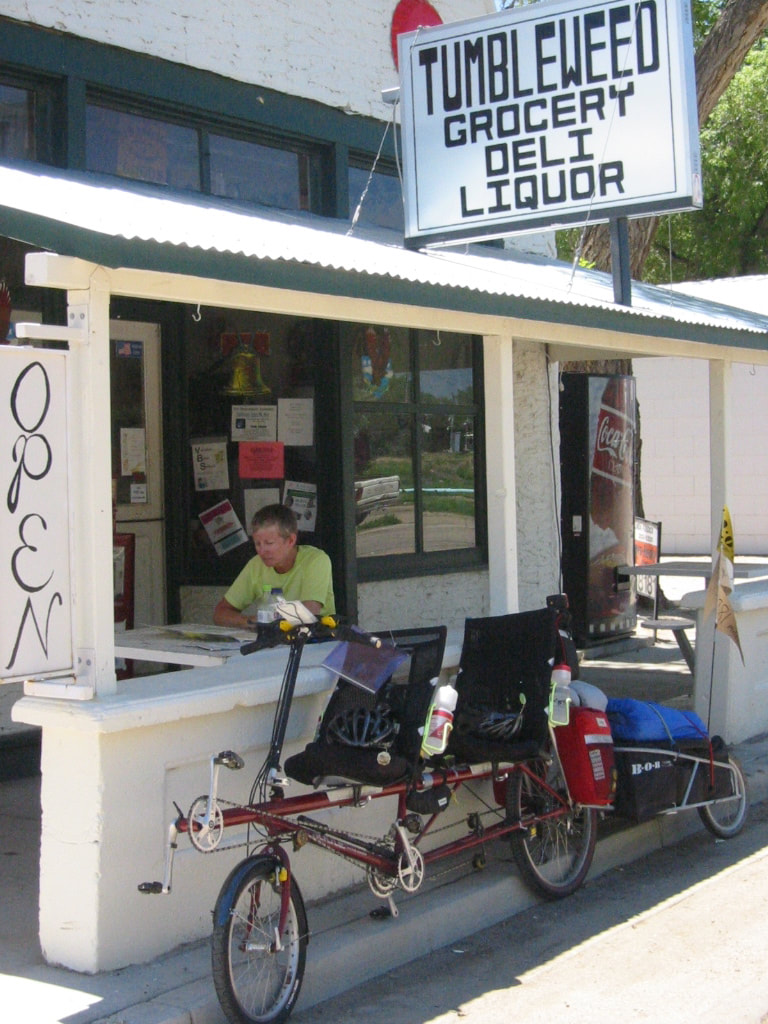 Lunch in Ordway?   Or was it Sugar City?   Eastern Colorado was a blur.
​
We started meeting a string of cyclists doing the Trans-Am trail and/or the Western Express today. Every time we saw a bike coming the other way, we stopped to chat and exchange notes/tips on what lies ahead. As we will find in later days, people are leapfrogging each other, telling stories about other cyclists ahead or behind them on the route. This is turning into a really interesting part of the trip. 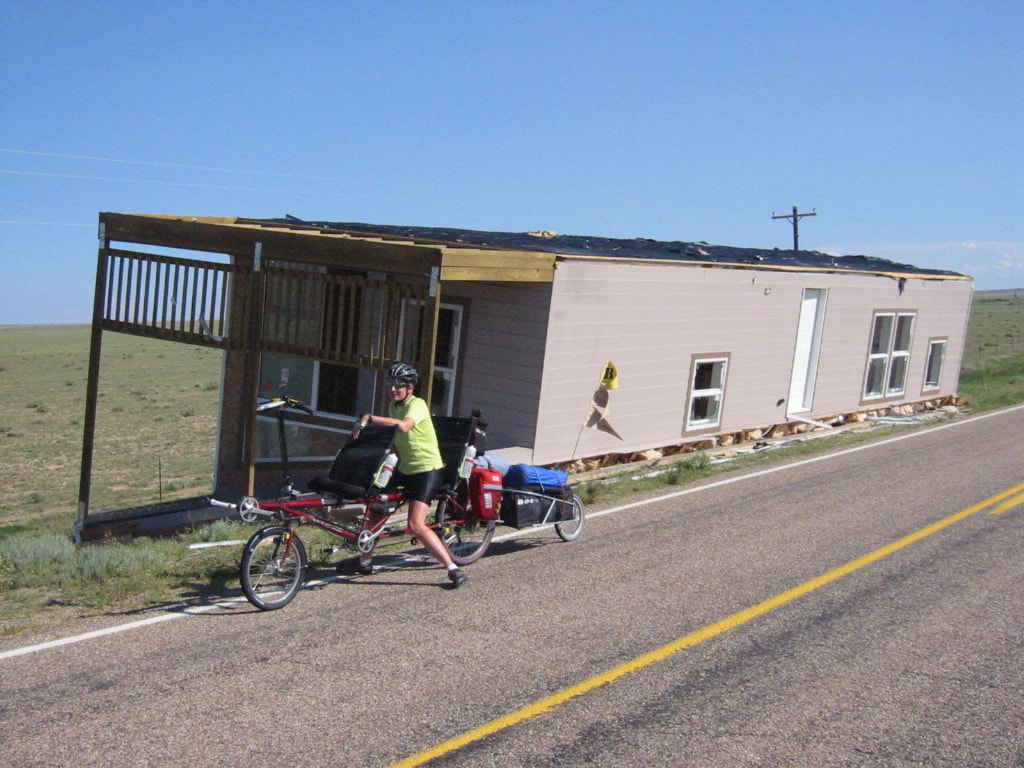 What happened here?
​
We also found out that the tandem we've been chasing since Middlegate Nevada, and closing in on, has decided to take a turn off-route. Looks like we'll never see them. We finally crashed for the night in a town park in Eads, just west of the Kansas line.
​
(- posted from Steve's home in Buhler Kansas)
​