Wednesday, June 2, 2004 - Day 6 - 104 miles
We spent a wonderful evening with Dale (Denise was out on biz) at his oasis at Washoe Lake, 15 miles north of Carson City. We did a pizza (and Dale likes anchovies ... whatta guy!) and checked out his outdoor entertainment/exercise complex. Very cool!! Thanks a lot Dale!  BTW .. we already miss Hamlet! He slept w/us for a while.  ;-) 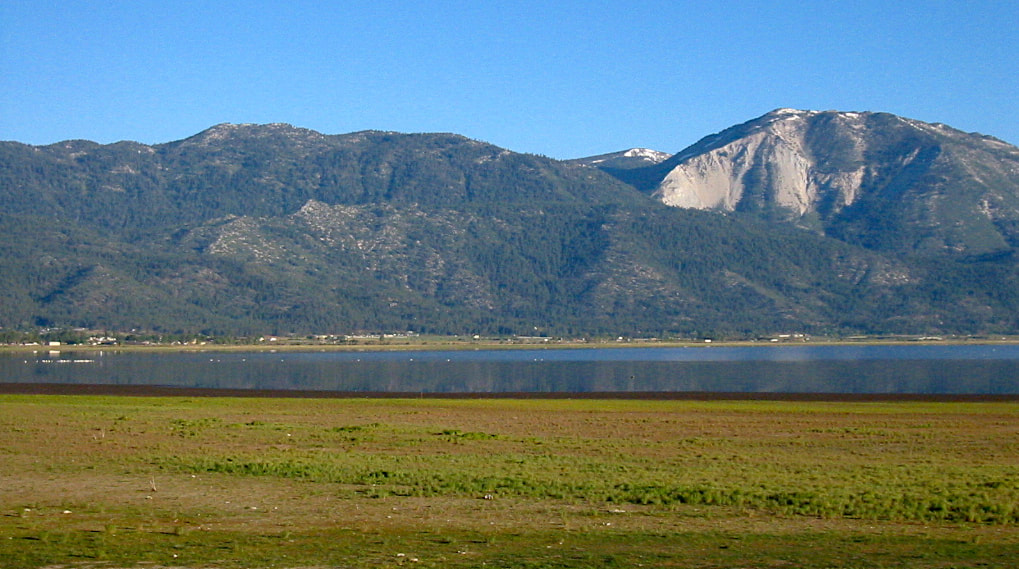 On the road early this morning and did 15 miles to get back on route in Carson City. Stocked up w/food and water to start out across the desert. Stopped at the reservoir by the road and rinsed out some riding clothes. Hope the EPA doesn't bust me for "hypersalinating" the reservoir. Jersey and shorts were getting a bit crusty from all the salt. 62 miles after Carson City @ 2:30pm and we're already in Fallon! Tailwinds, downhill, and beautiful sunshine. Stopped at a coffee shop to get fluids and found a free access computer. Ain't technology great? We're going to head out soon after letting the afternoon sun settle just a bit and unwinding as well. At 2pm, we saw a sign indicating 88 degrees. (But it's a DRY heat!) ;-) Karen's getting a little red around the edges even after bathing in SPF50 sunscreen. We're gonna find some zinc oxide before heading out. Over 100 miles to the next "real town". See ya'll ... sometime! 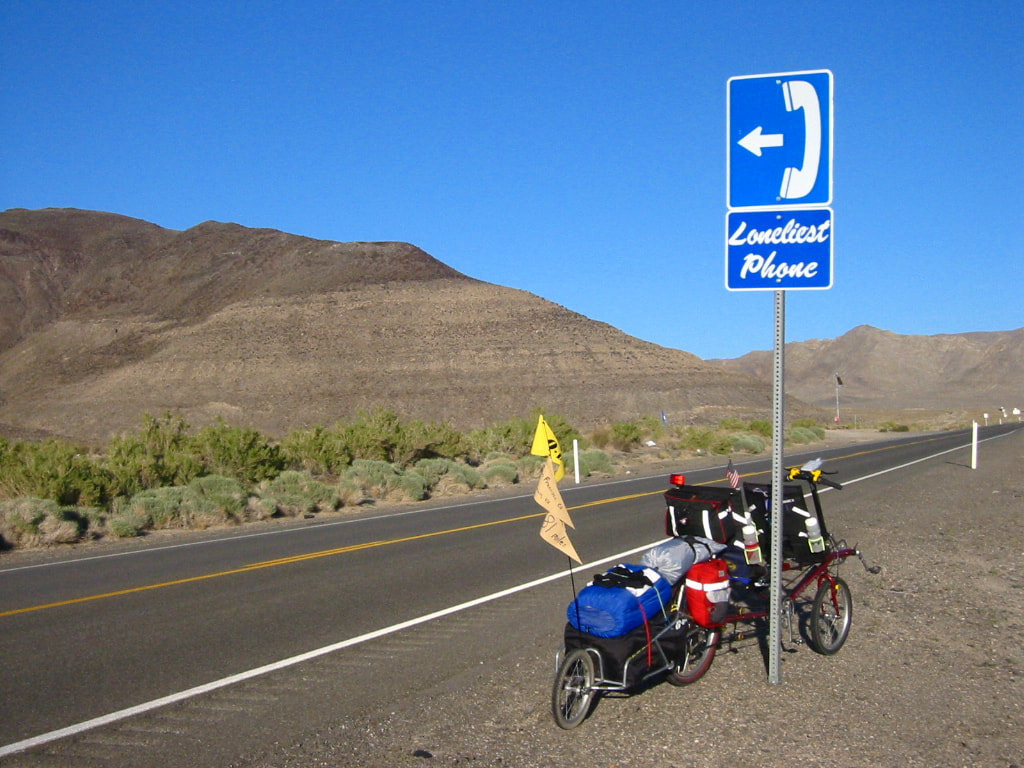 The Loneliest Phone in America
We last updated the blog from a coffee shop in Fallon. After eating and getting supplies, we continued on into the afternoon/evening by heading east into the desert. Outside of Fallon, we passed thru the area used by the Naval Air Station that trains fighter pilots. Movie buffs know the area as the home of the "Top Gun" school. And yes, we DID get to see (and videotape!) some planes doing touch-and-go exercises. We eventually ran out of steam near the base of the first ridge climb, and camped at a BLM (Bureau of Land Management) site known as "Sand Mountain". This area features a huge naturally occuring sand dune that is used by dirt-bikers, atv's, and equestrians. We were treated to a desert lit by a full moon that night (eerie yet beautiful), as well as a fireworks display provided by the ATVer's who rode up to the top of Sand Mountain at night. 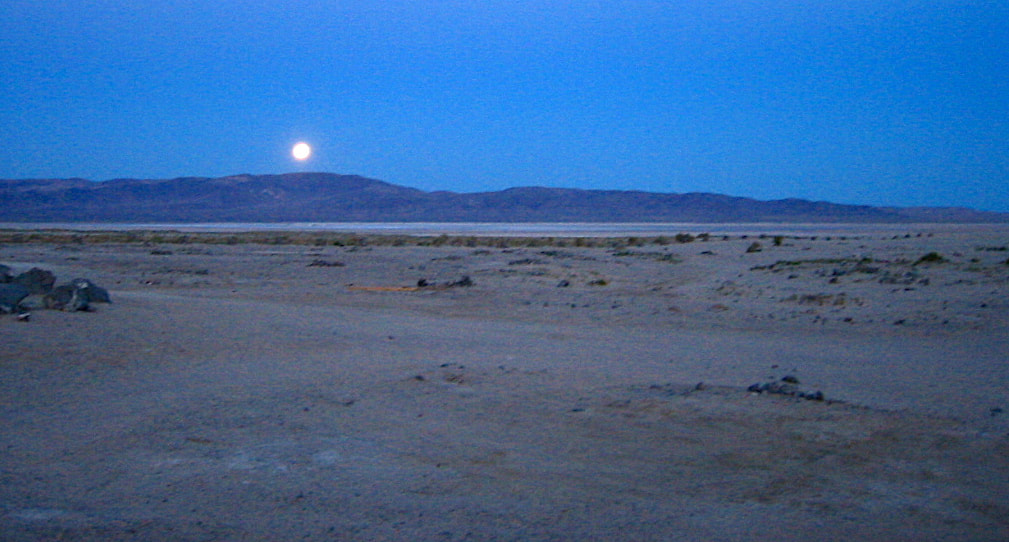 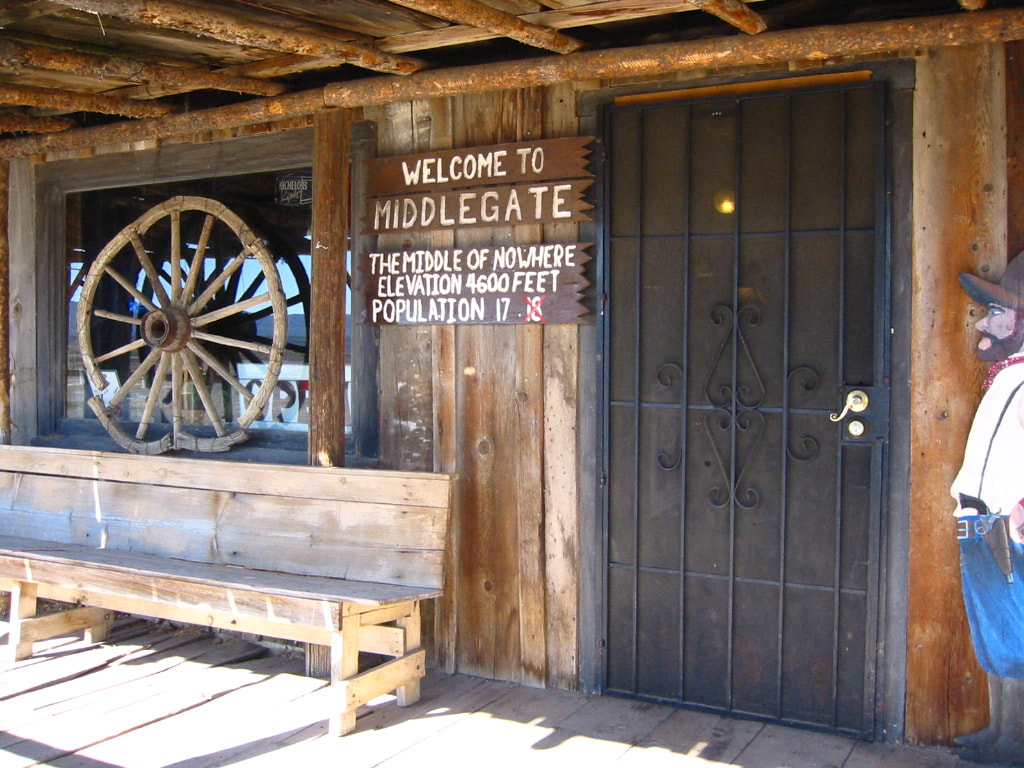 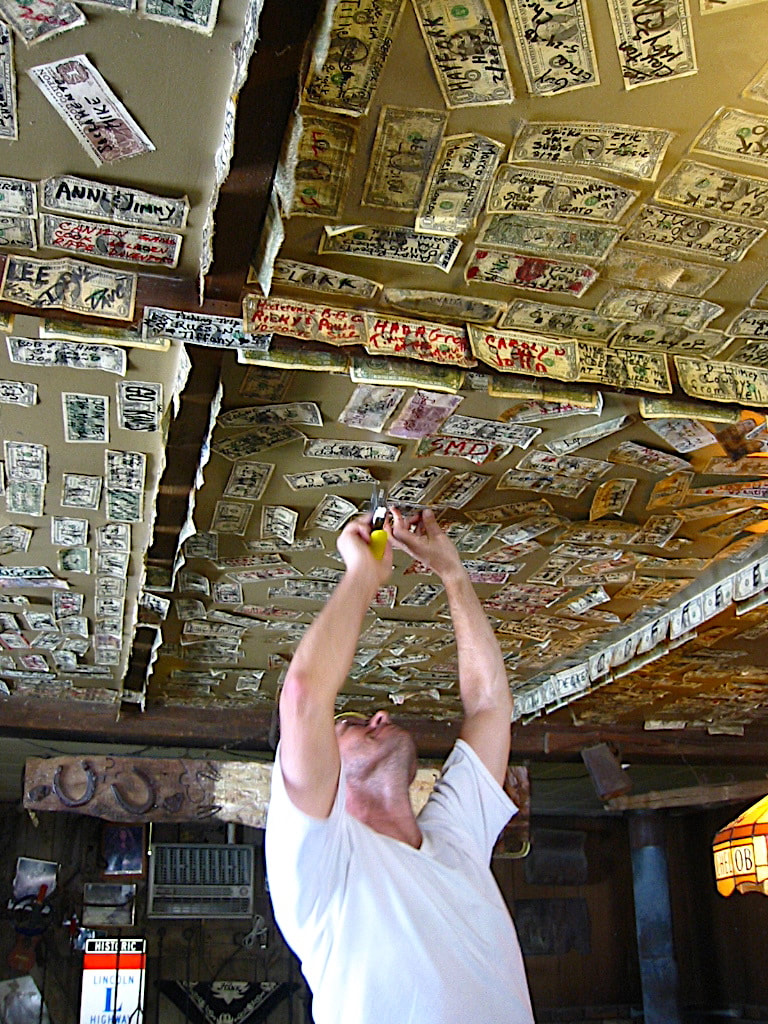 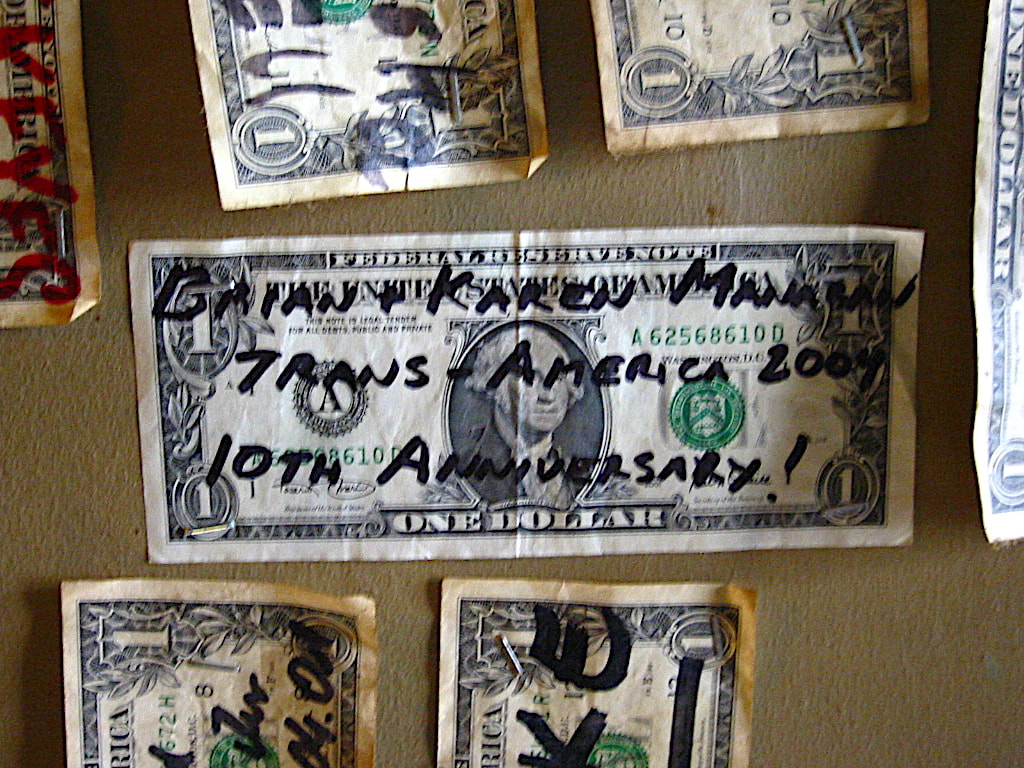 Met Shane, a lone female cycle-tourist who had been on the road for quite some time, touring the Northwest, and now in Nevada. Shane was "killing time" by doing an out-and-back across Nevada.

The waitress shared news of the "Mormon Crickets" invading Austin down the road, which freaked out Shane. We eventually arrived in Austin, and true enough ... the place was INFESTED with these crickets as big as the palm of your hand. So many, that the road in town was SLICK with squashed crickets! They were in the stores, in the laundrymat ... everywhere!!! (Except in our motel room!)  Temps in the 90's.

(- posted from Ron and Nancy's home in Cedar City Utah) 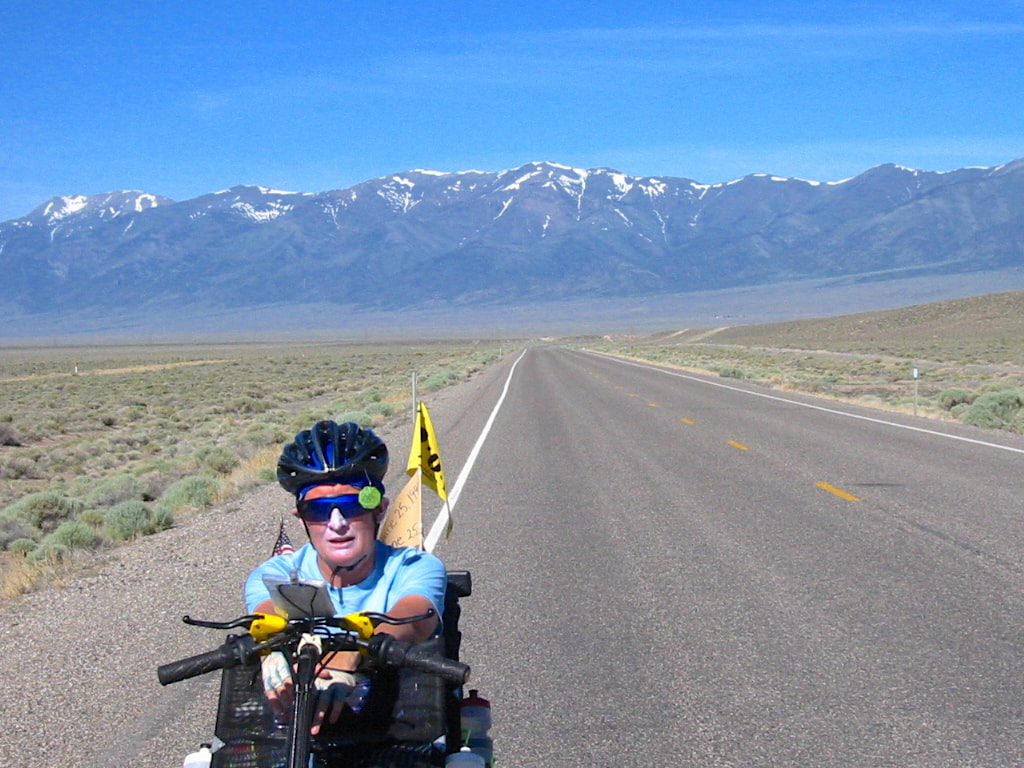 Rush Hour in Nevada
​We met with Shane again in Eureka, and decided to camp together at an RV site with showers for $5 a tent. Eureka turned out to be our favorite Nevada town. Very cool place. Temp in the 80's.
​
(- posted from Ron and Nancy's home in Cedar City Utah)
====================================
Saturday, June 5, 2004 - Day 9 - 81 miles
We hit the road before Shane even woke up. Good thing ... the ridges were getting tougher, but at least we still had tailwinds till early afternoon, when things started to change. At the top of one of the summits, we met the two other cyclists who were traveling from Frisco to Massachusetts on a fund-raiser ... the same two we saw last night coming into Austin. Shane caught us on the last climb of the day, but true to tandeming, we dropped her on the downhill side (about 20 miles of downhill!)
​ 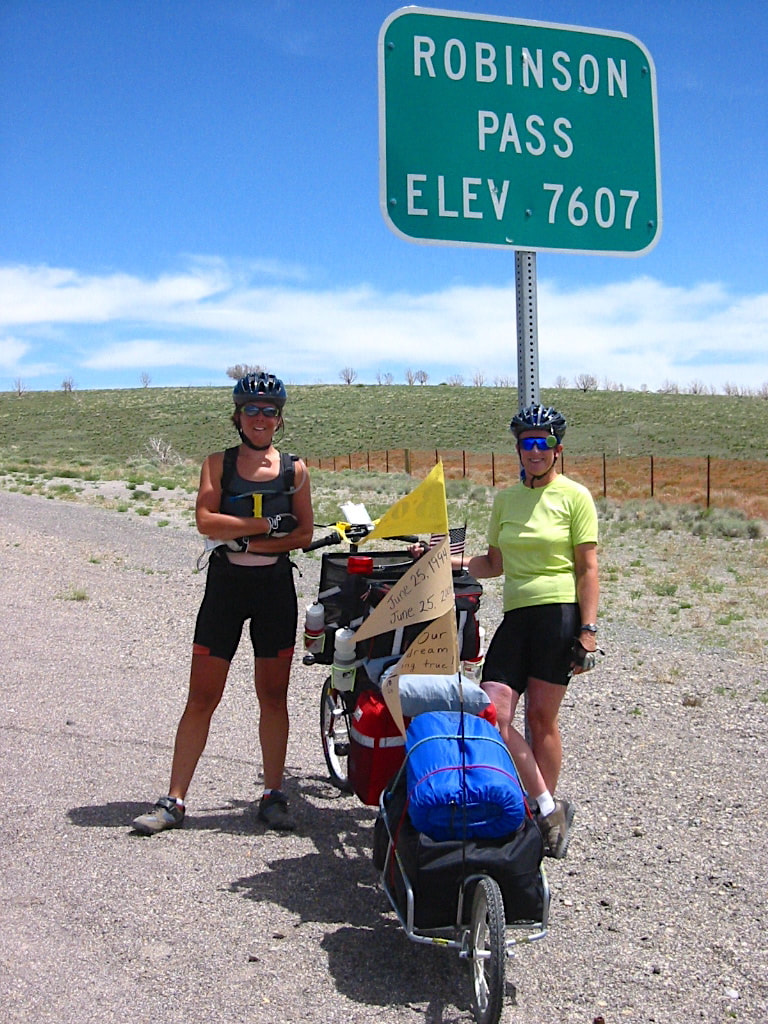 We arrived in Ely in the early afternoon and stopped for an early dinner at a cafe. I was starting to feel really burned by the sun and wind. Shane arrived in town right after us and we flagged her down. We agreed to have her run ahead to get a place at a campground while we finished dinner, and she already had a beer in hand by the time we arrived.  ;-)  Sunshine, tailwinds, and 90 degrees. 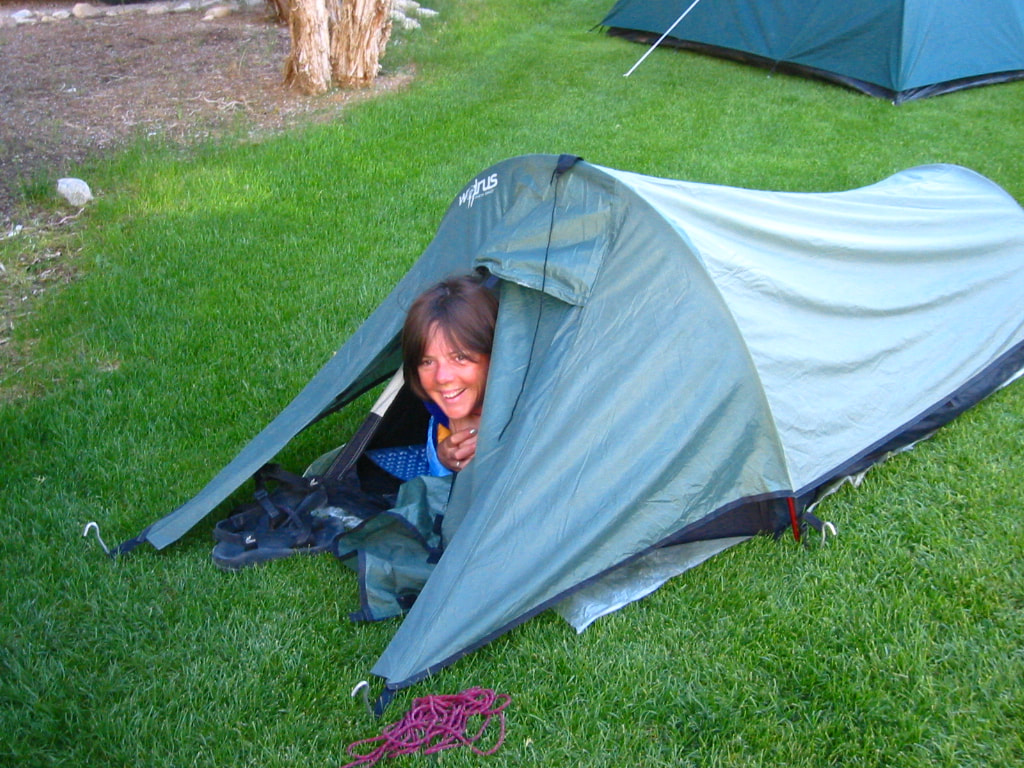 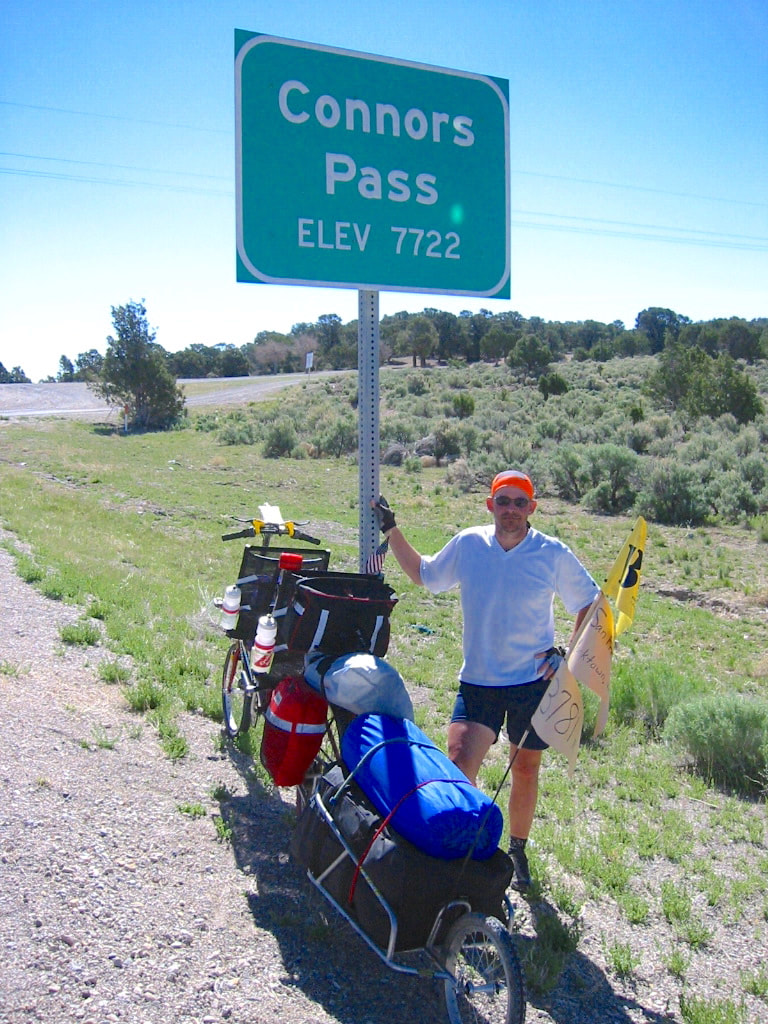 ​The winds started to pick up and get a LOT hotter. By the time we reached Baker (2pm), it was in the mid 90's and getting really windy. We camped out on a shady porch and had a nice chat w/the locals (and the Porchasaurus) till 5pm, when we decided to try moving on. 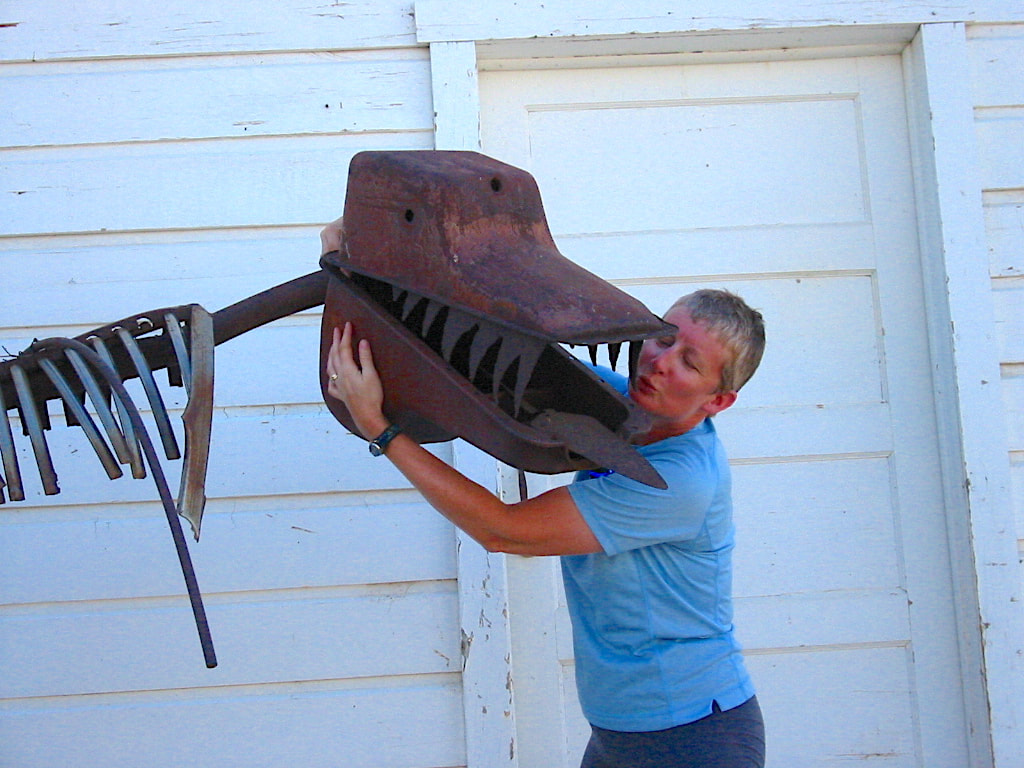 It was 84 miles to the next town (NO services in between) and we wanted to shorten tomorrow's ride, knowing that we would be facing strong headwinds. We crossed into Utah ...

around 6pm Pacific (7pm Mountain) and finally quit for the day by camping in "Snake Valley". We discovered the name of the valley AFTER finding two rattlesnakes sunning on the highway. Hmmmm... 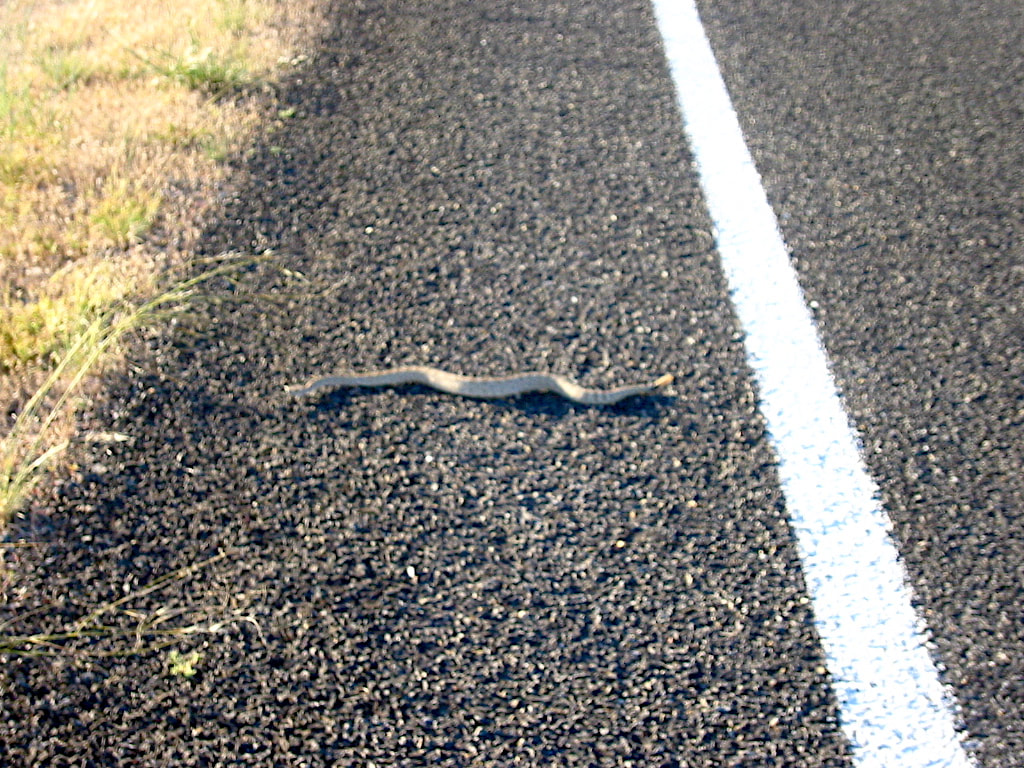 Nobody bothered us at night. In fact, we decided that Utah Route 21 is the REAL "Loneliest Highway in America", not Nevada 50 as every tourist trap along the road claims.
​
(- posted from Ron and Nancy's home in Cedar City Utah)
​