Friday, July 9, 2004 - Day 43 - 97 miles
Hit the road out of Clay at 7am with the plan to stop for a rest day in Sebree, which has a reputation among cyclists on the TransAm Trail as a Cool Place® for staying. There's a bike hostel operated by a local church there that has everyone going westbound talking about it. We got into town VERY early, and between no libraries (no net access), great tailwinds going that day, and nothing to do in Sebree, we decided to move on after buying a little napkin dispenser made up to look like an old Coke machine. No, we're NOT carrying it! Karen walked around the corner from the fountain store and mailed it home from the post office. Continuing on, we found more rolling hills, beautiful scenery, and cookin' tailwinds that blew us all the way to Rough River Dam State Park ... 97 miles from the start of the day! Still hot and humid, and I've taken to riding shirtless these days. I'll be scorched, but we're moving better!
​
(- posted from the Berea Kentucky public library, 7/12/04)
======================================
Saturday, July 10, 2004 - Day 44 - 65 miles
Another early start ... more tailwinds and hot (90+ is the norm). Nothing spectacular today .. just more fantastic riding in Kentucky. We got into Hodginville (birthplace of Abraham Lincoln) after the library closed.We MIGHT have made it, but had to sit out a rainstorm under a tree just long enough. Decided to hole up in a motel this evening due to stormy weather (a GOOD decision, we found later!) and met 4 more westbounders, the "Gang of Four", who decided to stay in the town park.
​

​We briefly considered taking a chance and joining them, but ... after we visited the Lincoln Historic site ... 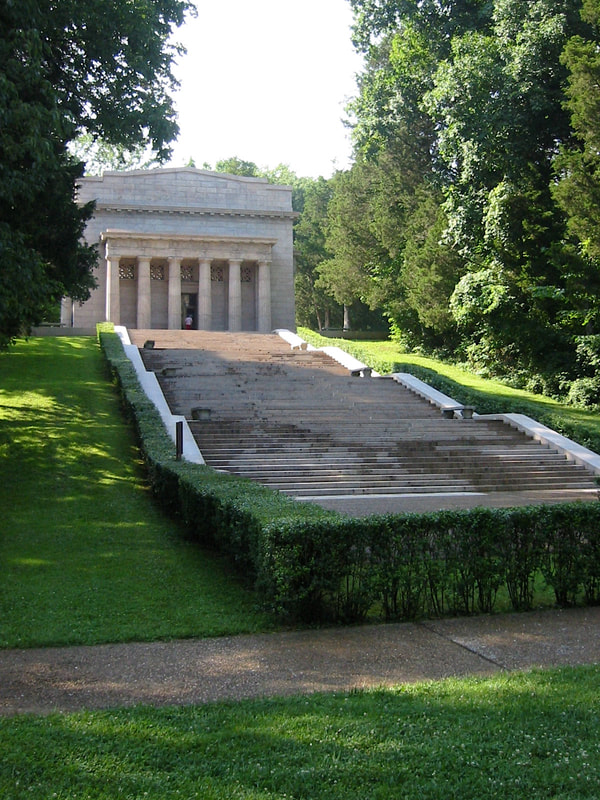 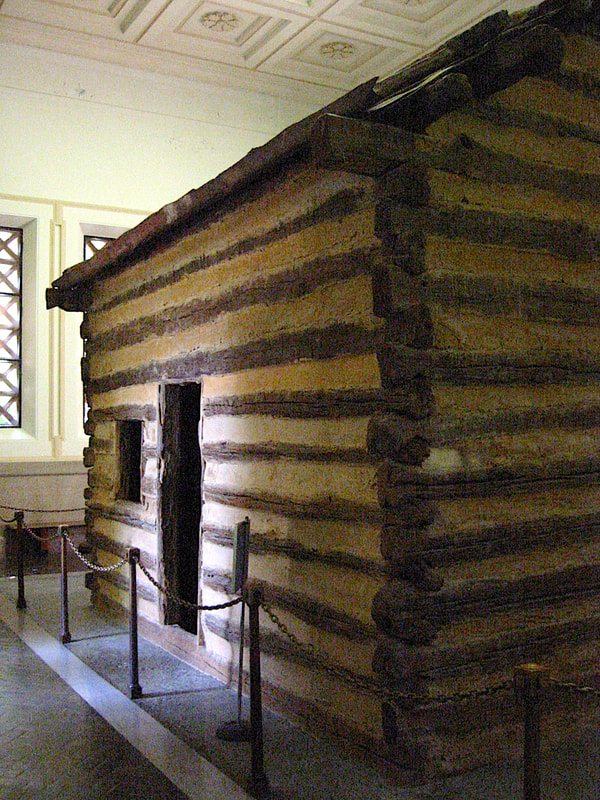 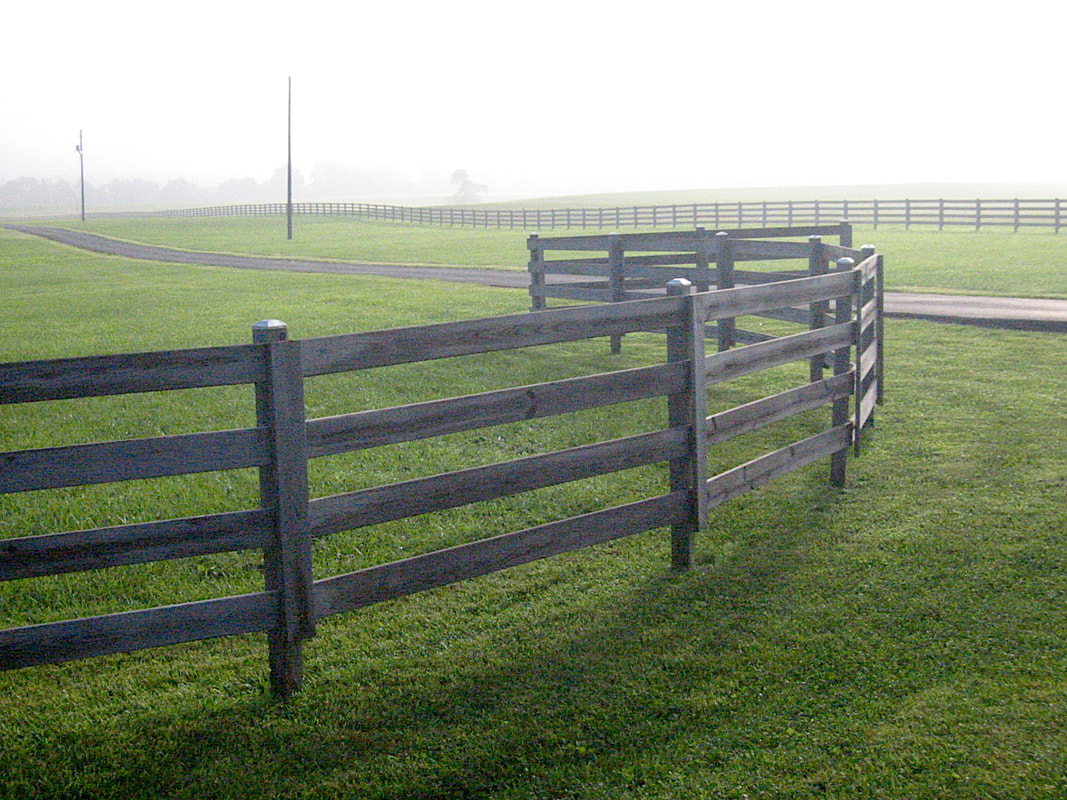 Yet Another Soggy Morning
We were having lunch in Bardstown and the storms hit. We waited it out, took off, and got only a few miles out when another storm rolled in. We found shelter at a C-Mart (again w/o getting caught), and after waiting for an eternity, got rolling again towards Springfield. Just as we were getting into town, ANOTHER storm blew in and it was soooo bad, that a car across the road (from the gas station we took cover at) lost control in the rain and went into the ditch. We waited that one out and decided to eat at the Mexican joint across the parking lot. Karen hiked across the road to the scene of the accident to ask the cop who was attending to the mess if he knew about camping in the city park.
​ 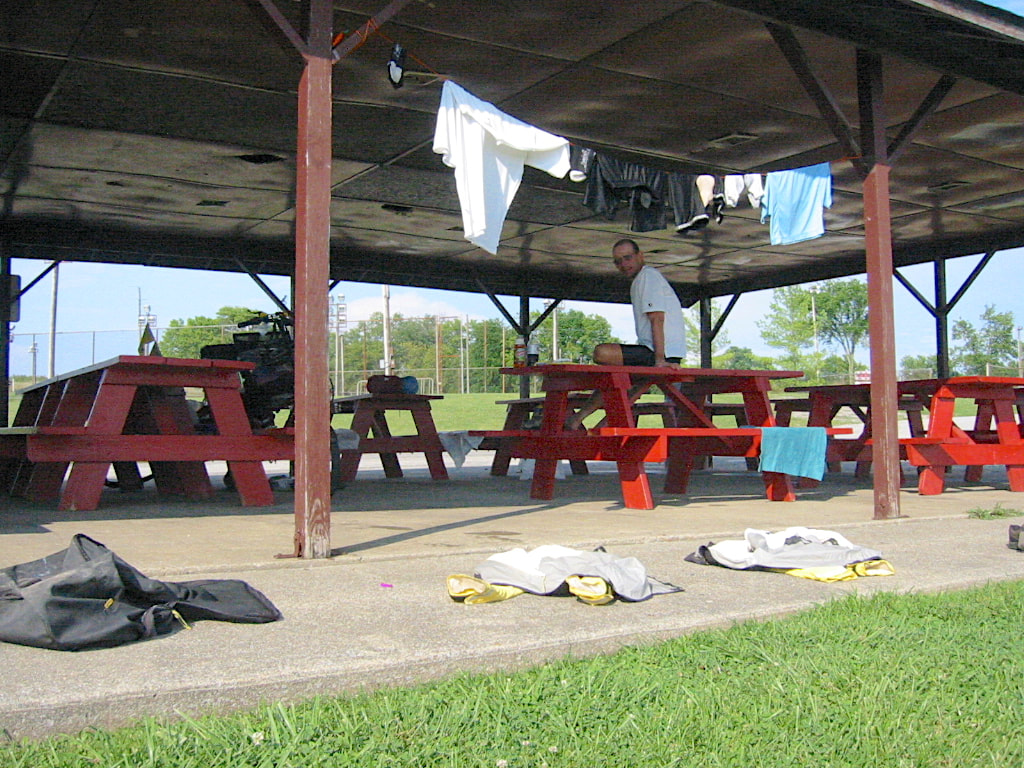 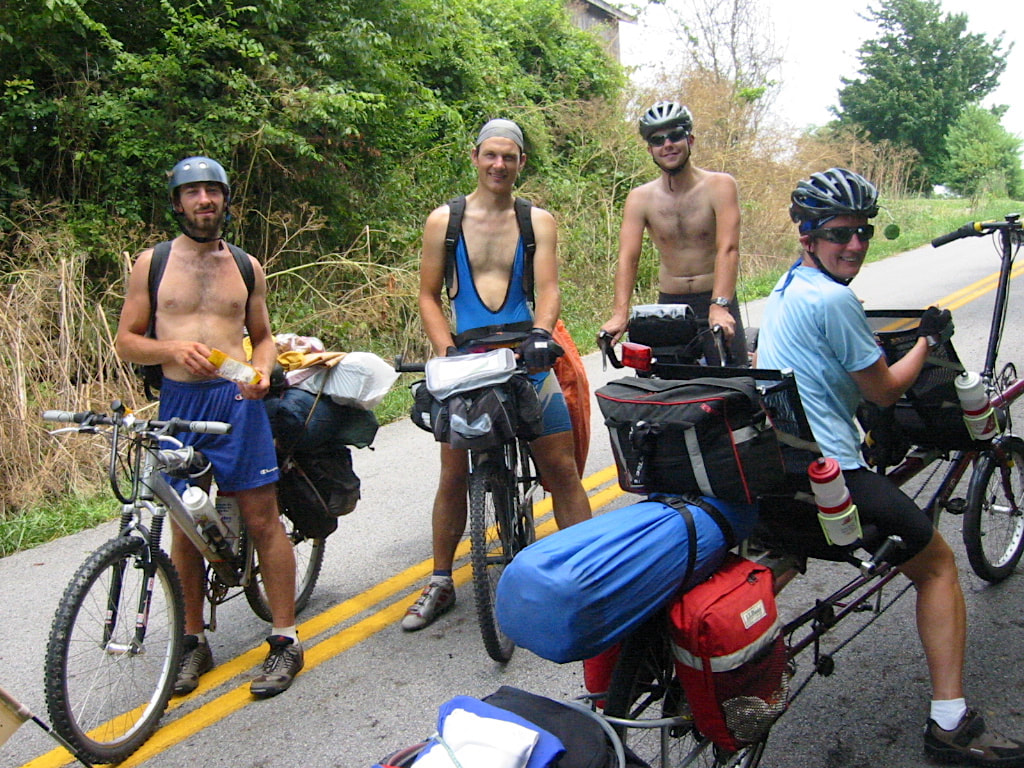 Hey guys ... the waitress in Springfield might take you home.
Another Trail Angel! Even with a threatening start, the weather cleared up for a while in the afternoon, and we logged some great miles even under the heat and humidity.
​ 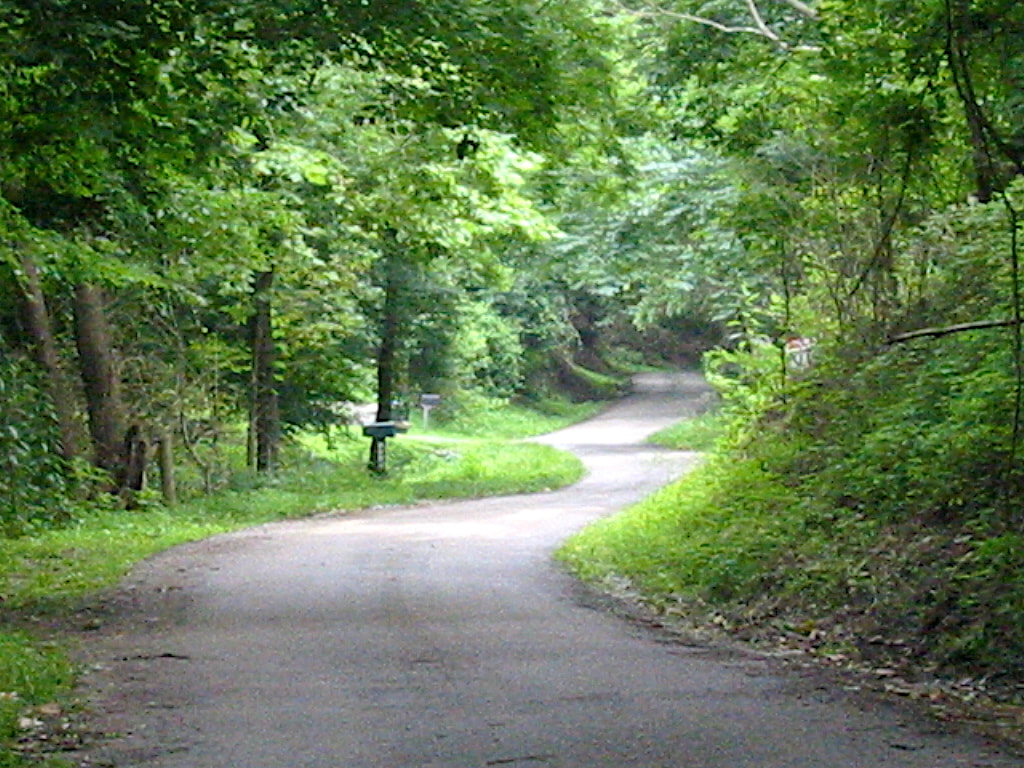 Looks like a driveway, but yes ... it IS the Trans-America Trail
Just as we got into Berea, we were overtaken by a surprise storm and got under shelter ... JUST IN TIME .. again! (Our luck HAS to run out sometime, don't you think?) We found a GREAT little B&B to hole up for our first full rest day since Pueblo Colorado, had dinner, and a great chat with our hosts Neil and Mary.
​
(- posted from the Berea Kentucky public library, 7/12/04)
===============================================
Tuesday, July 13, 2004 - Day 47 - 10 miles - Rest Day
We're in Berea Kentucky! Sorry for being offline for so long, but we've had difficulties finding libraries that we're open when we pass thru town. We've made good time however ... we're at the base of the Appalachian Mountains and we think we have about 2 weeks to go to reach the Atlantic.
​
(- posted from the Berea Kentucky public library, 7/12/04)
Today is a rest day - the first full day off since Pueblo Colorado. We slept in late, actually getting up and about around 9am. Neil took our laundry home with him last night and we found it clean and folded at our door when we got up. We did the blog (see below) and headed into the town square to finally find a hair dresser for Karen to get her haircut ... nearly a whole state later than she had wanted. I had a cappucino in the coffee shop next door while waiting. So nice to sit in a fully upholstered chair to have a coffee, instead of the concrete slab outside a convenient mart. We moved on from there to the Kentucky Artisans Center where artists and craftsmen from around Kentucky can display and sell their works. We found a display there that included work from our hosts Neil and Mary.
​ 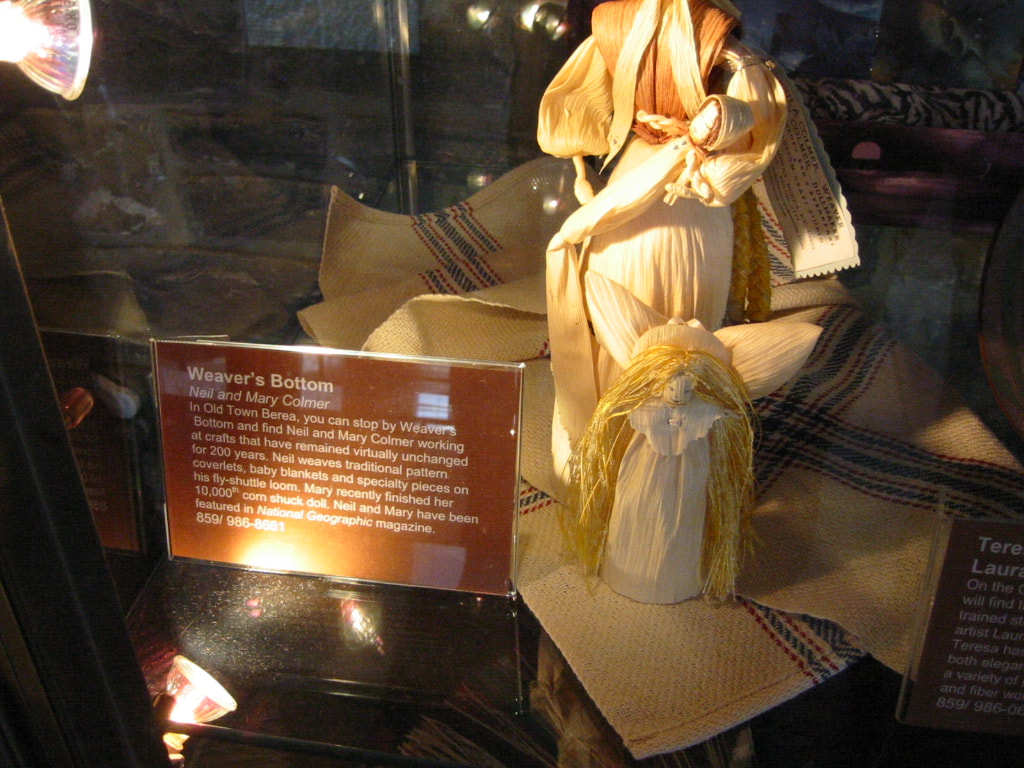 More on them later. We found a replacement tire for the Bob trailer ... and just in time. The poor thing had a huge stone stuck in it that was scratching the tube, and the rubber was starting to peel off the casing, just like the Screamer's rear tire had started to do 1000 miles ago. After one and three quarters of transam crossings (this tire did a transam crossing for Hank Walck a few years ago), I think it has served well. So now, all three tires have been replaced on this trip.

We had dinner at a pizza joint that had a buffet, and headed back to the B&B. The weather channel reported big storms coming our way, and good thing we were inside again... it was a monster that caused considerable damage around Kentucky that night.

A note about Neil and Mary :
They operate a wonderful business called Weaver's Bottom in the Old Town section of Berea, and I would really encourage anyone to go visit the shop and see what Mary and Neil create.
​ 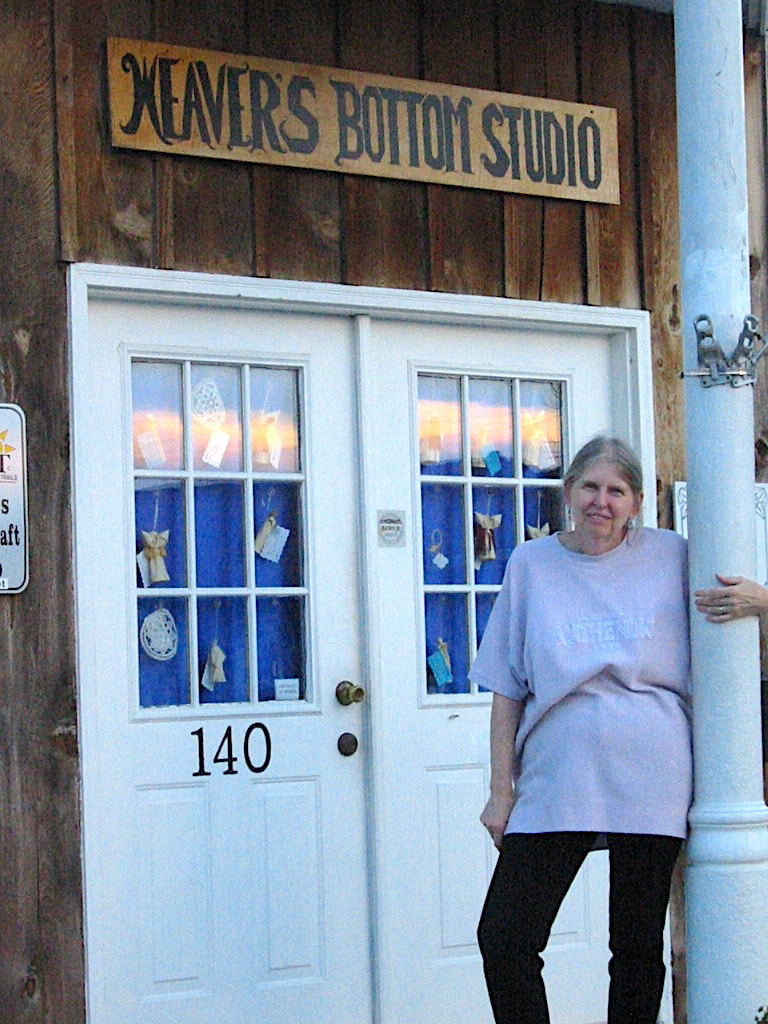 They are warm and friendly people who love to share the joy of their work. In addition to the business, they operate the Morning Glory B&B where we stayed (upstairs from the shop) and it's a beautifully decorated, yet comfortable and relaxing place to stay.
​ 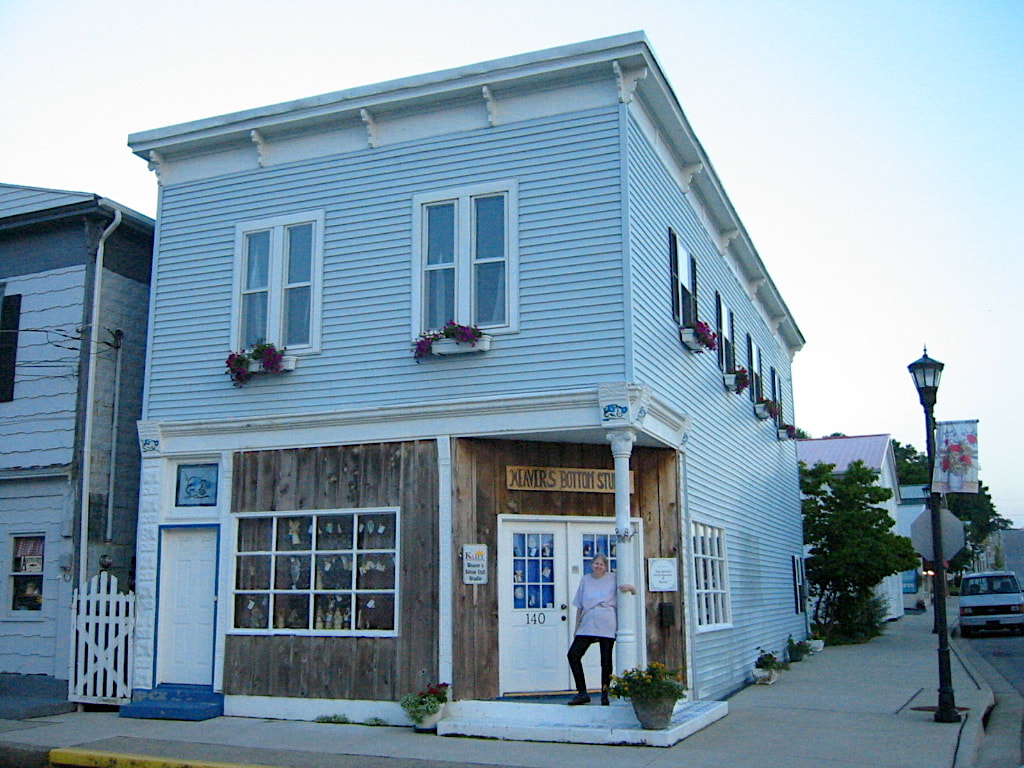 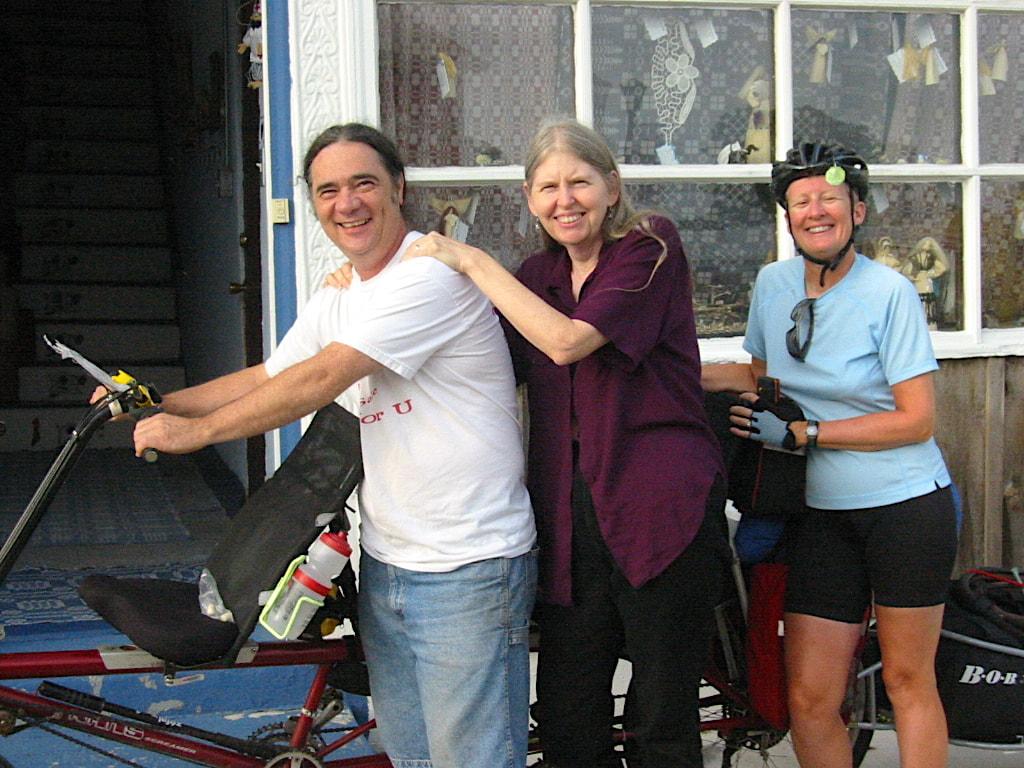 ...we hit the road under somewhat gloomy skies that later sprinkled just a tiny bit on us. No matter ... the sun later came out and we had super tailwinds (left over from last night's storm) blowing us all the way to Buckhorn Lake Dam State Park ... 90 miles into the mountains from Berea! The roads are getting more exciting (if that's even possible) ... 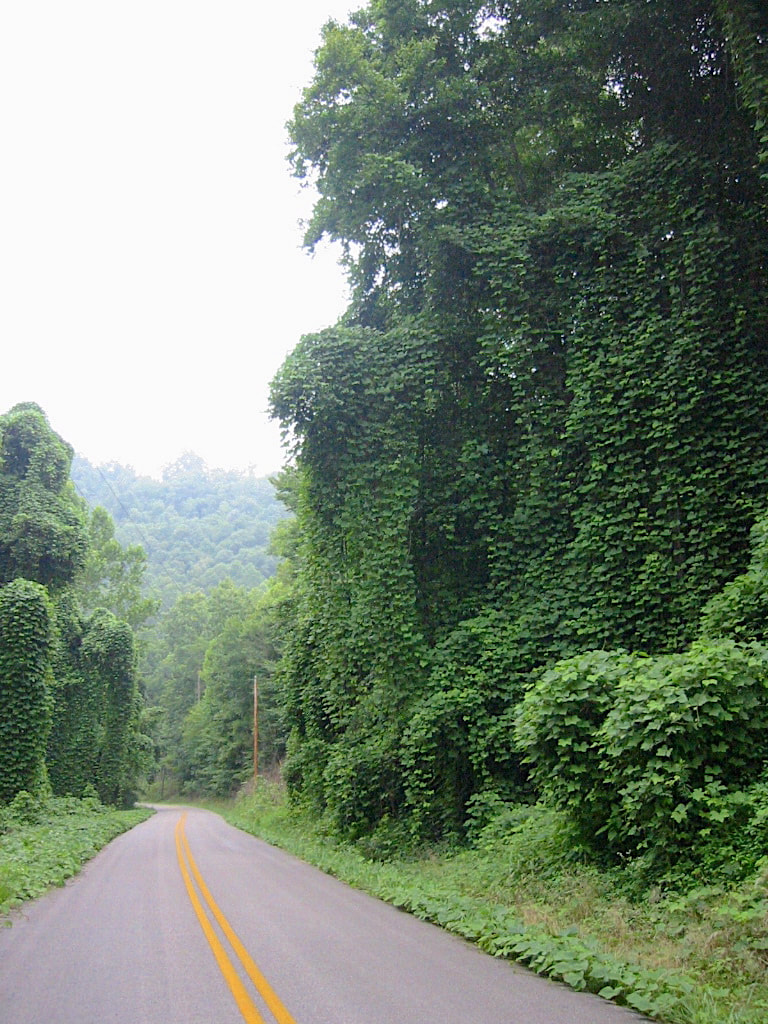 ...are in WONDERFUL condition, and the mountains and knobs are beautiful! (Now ... about those dogs ...) In our tent at night, we started to reflect on how far we've come, and how little time we have left to go before reaching the coast. We can't believe we've done so well and had so few problems. 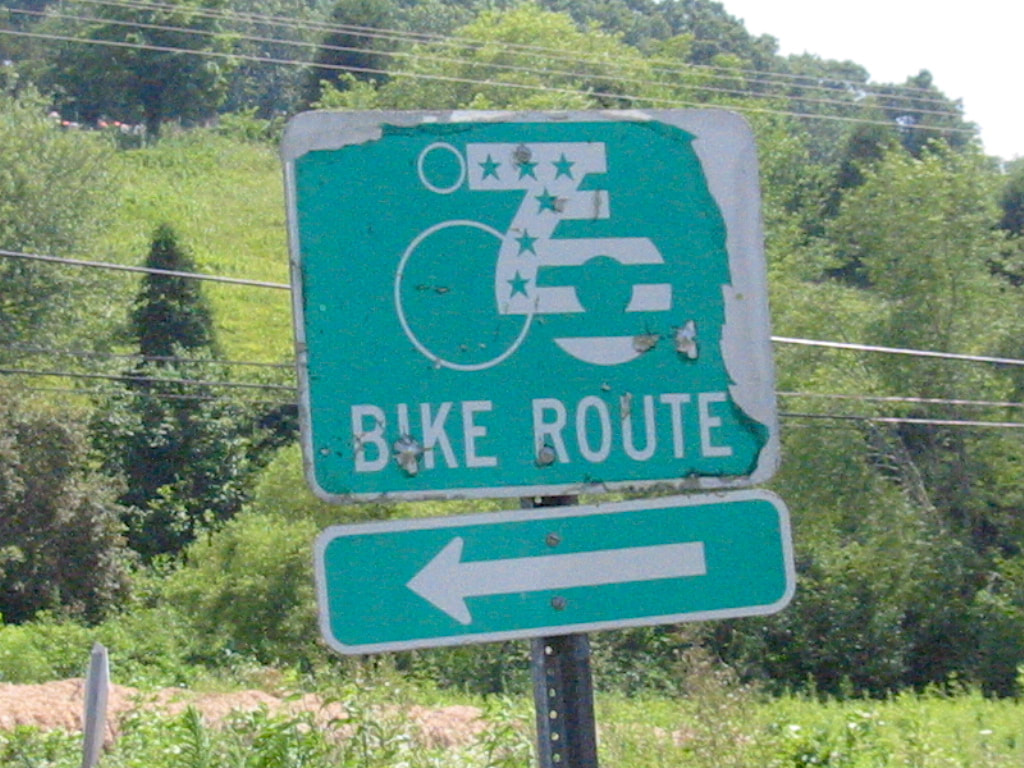 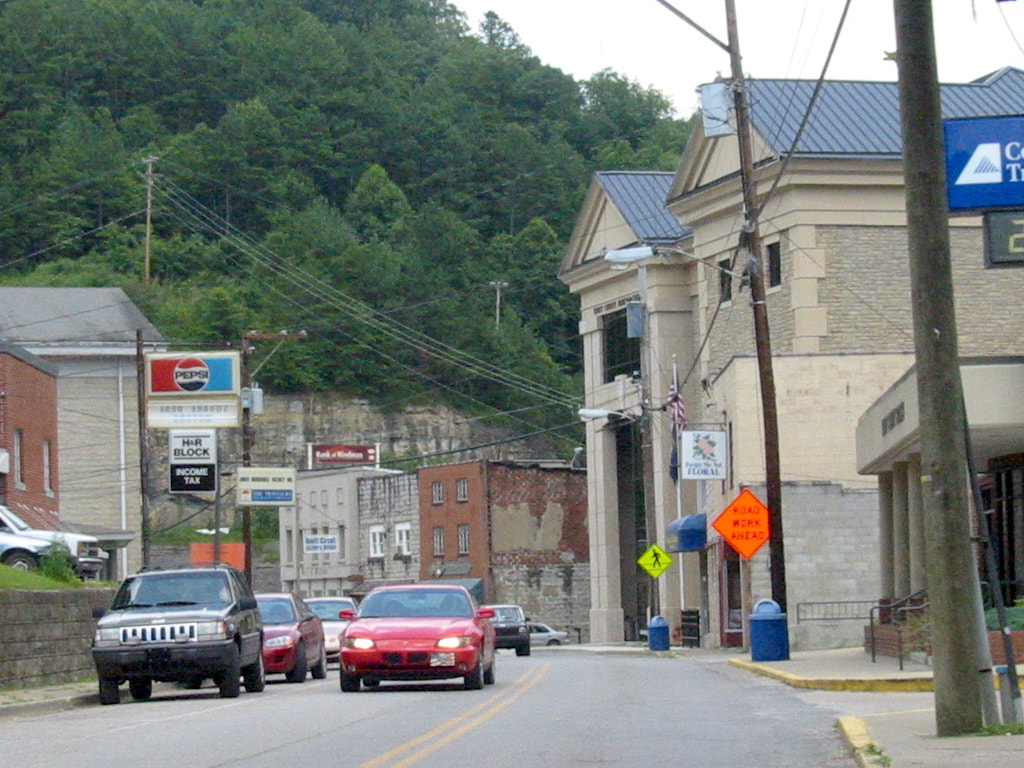 We had a late start this morning, but we don't have far to go today. We're writing this in Hindman, just 8 miles from Pippa Passes, where we've made arrangements to stay in a biker hostel. A few of these places have sprung up along the TransAmerica Trail in response to a real need for safe and comfortable (and INEXPENSIVE) shelter. They really are a treat, and many of them are the talk of the trail among cyclists who pass each other (westbounders and eastbounders sharing notes). We're looking forward to getting there in an hour or two. Tailwinds! (for REAL!!!!!)
​
(- posted from the Hindman Kentucky public library, 7/15/04)
Our stay in Pippa Passes was pretty cool. The hostel we stayed in is run by a couple who has hosted cyclists all the way back to the original '76 crossings! Thank You!! Another warm and dry night when it COULD have been "something else" (rain?). Short day ... 56 miles ... since it would have been a long way to the next available stop.
​
(- posted from the Wytheville Virginia public library, 7/19/04)
====================================
Friday, July 16, 2004 - Day 50 - 65 miles
Only 50 days, and we've gone 3300 miles already? Not bad for a couple old "...."'s.  ;-)

More and bigger hills/mountains today. We're having to work a bit harder to get around now. Things are getting steep and curvy. (translation: Fantastic biking!)
​ 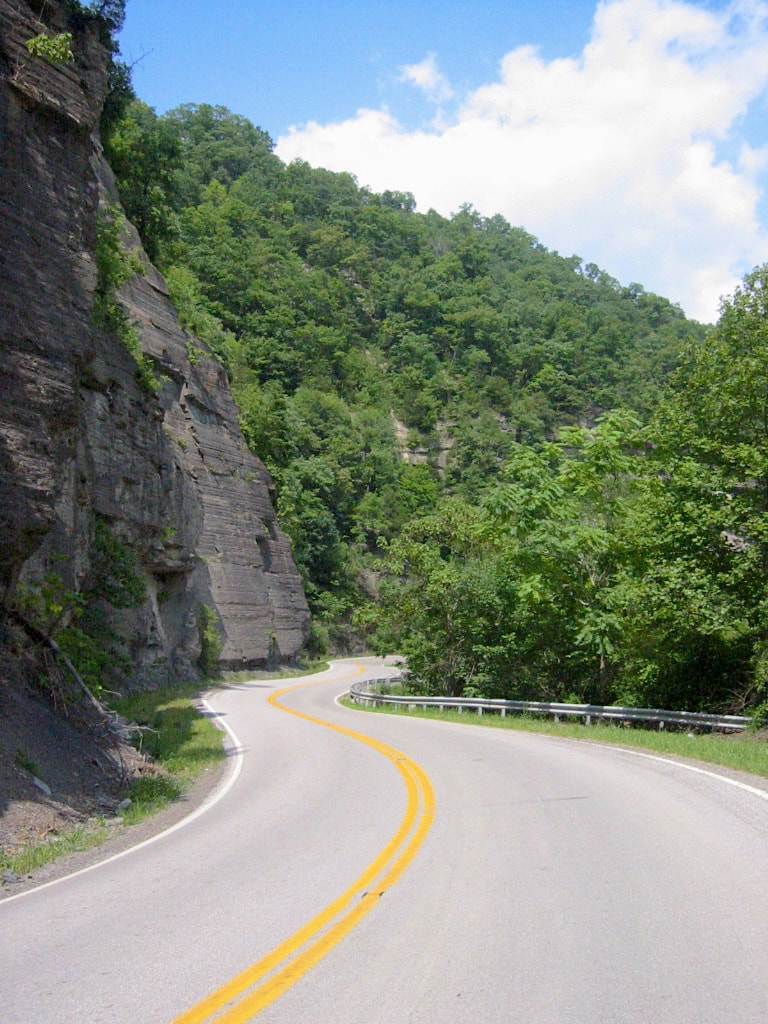 As evidence of how tough some hills are getting, we blew up the drum brake today. Tore the Pac-Man (the stop on the frame that mounts the stationary arm of the brake) off the frame on a downhill. Bummer. We've still got the hydraulic Magura's on the rims, and we're not really worried about overheating big fat tires on big fat rims, but it would be nice to have the backup anyway. Oh well ... we'll just have to be over-conservative on the twisty's. 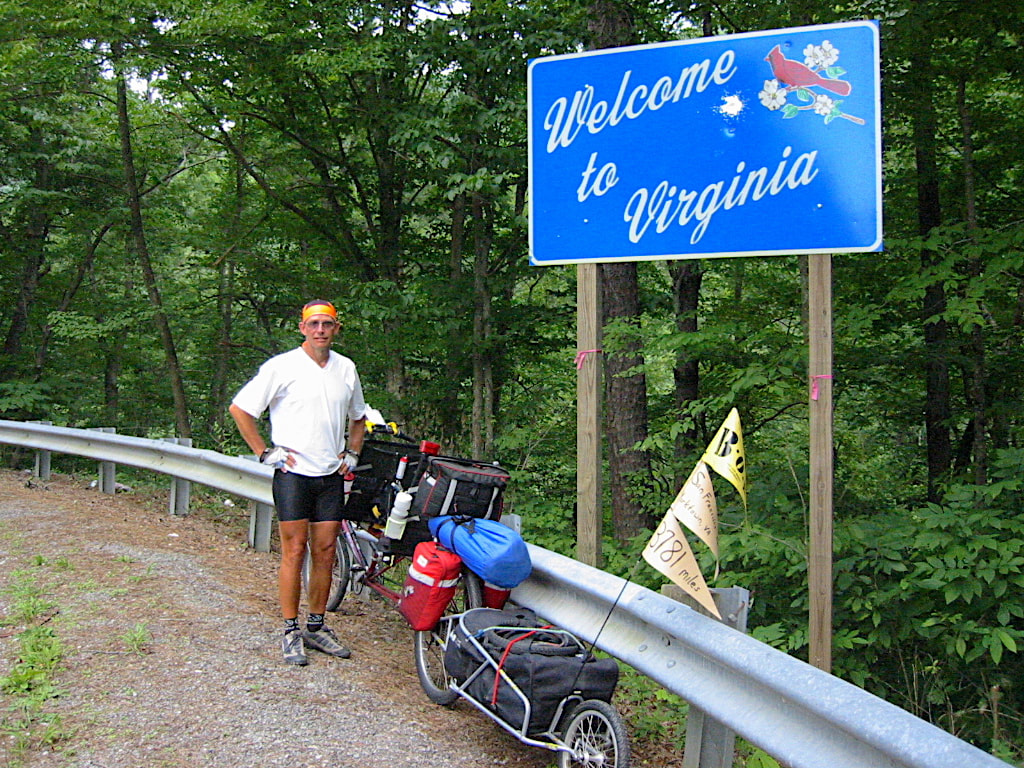 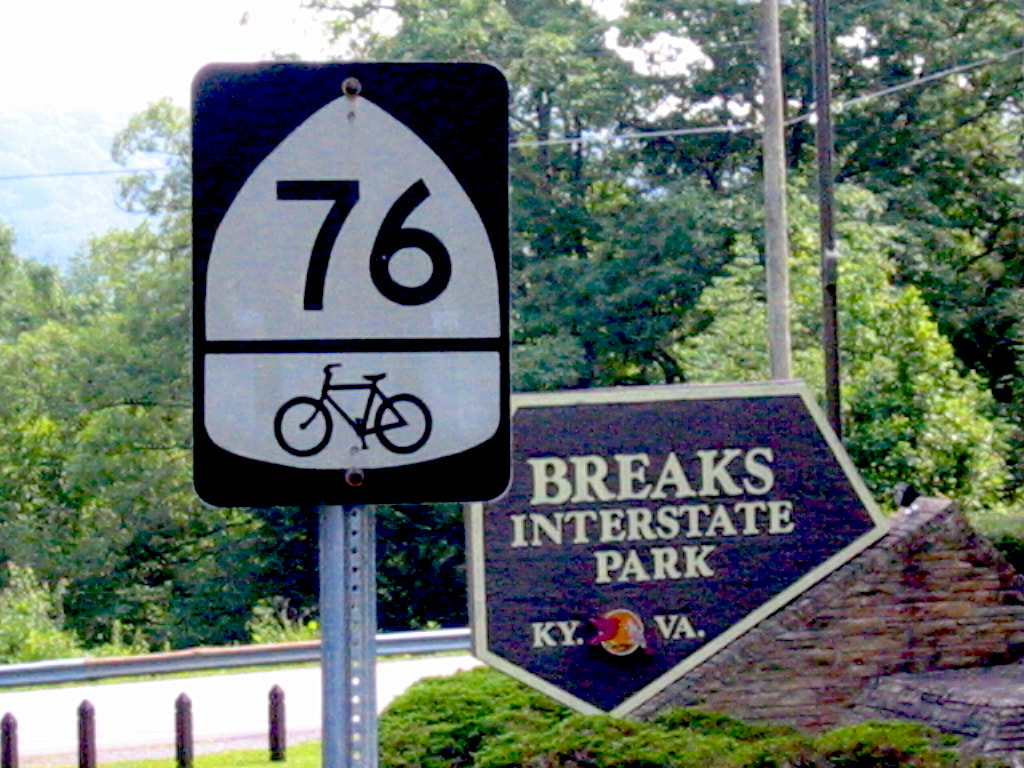 And Right On The Route!
Breaks is a beautiful state park co-operated by the state parks of Virgina and Kentucky. It's not quite as dramatic as Cedar Breaks in Utah, but the geology is similar. Only here, you can't really see as much since everything is covered in green.
​ 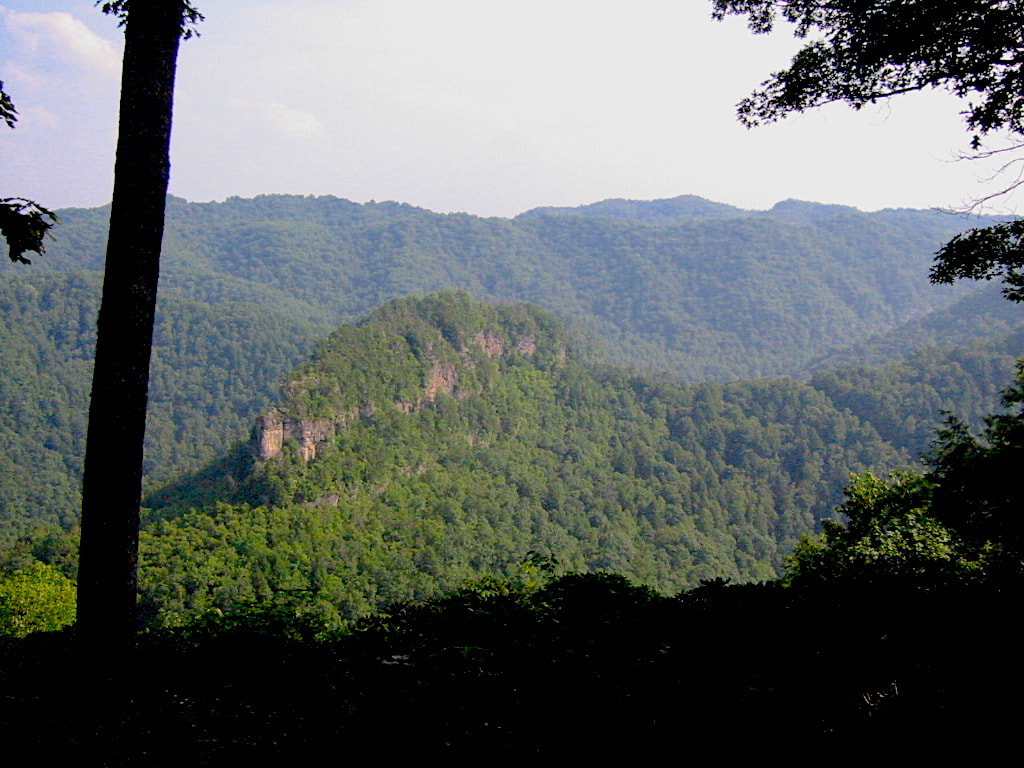 We've decided that east Kentucky and western Virginia are a virtual rain forest. (No water shortages HERE!) Had dinner at the lodge overlooking the gorge, did laundry, got SHOWERS, and we managed to get the LAST tent site available in the park! Because the park is celebrating it's 50th anniversary, we're told that the campgrounds are full every weekend this year. (Irish luck? I'll TAKE IT!) It rained during the night, and Karen continues to wake for every storm, and I continue to sleep right thru them. 65 good hard miles.
​
(- posted from the Wytheville Virginia public library, 7/19/04)
​