Monday, June 7, 2004 - Day 11 - 64 miles
It was windy all last night, and we had nothing but crosswinds all day. We figured this to be our toughest day yet. (We eclipsed THAT the next day!) We got snagged in a big dust storm in the Wah-Wah Valley ... 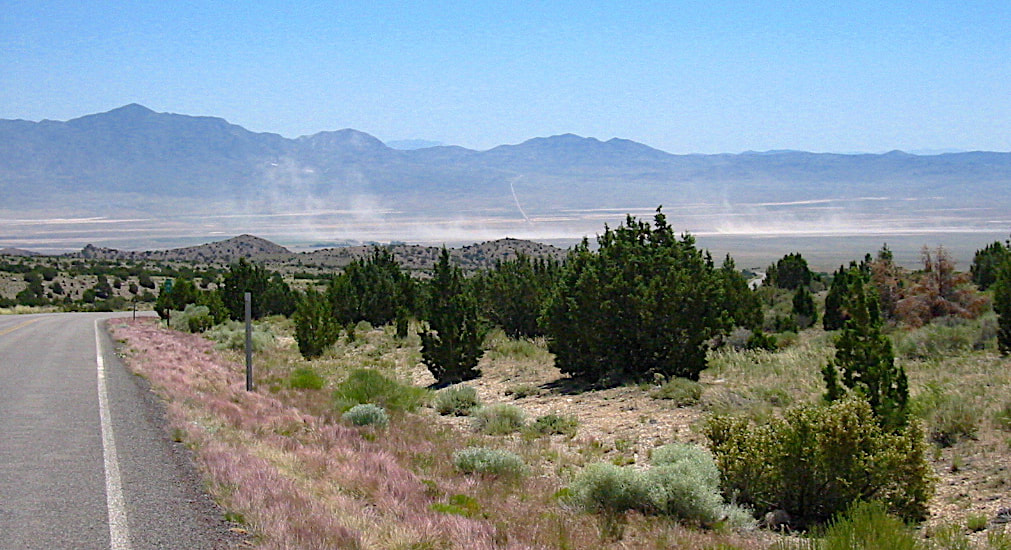 ... and had a couple really long and steep passes to cross as well. By now, we had begun measuring our days in the number of passes we had to summit, and not by miles. 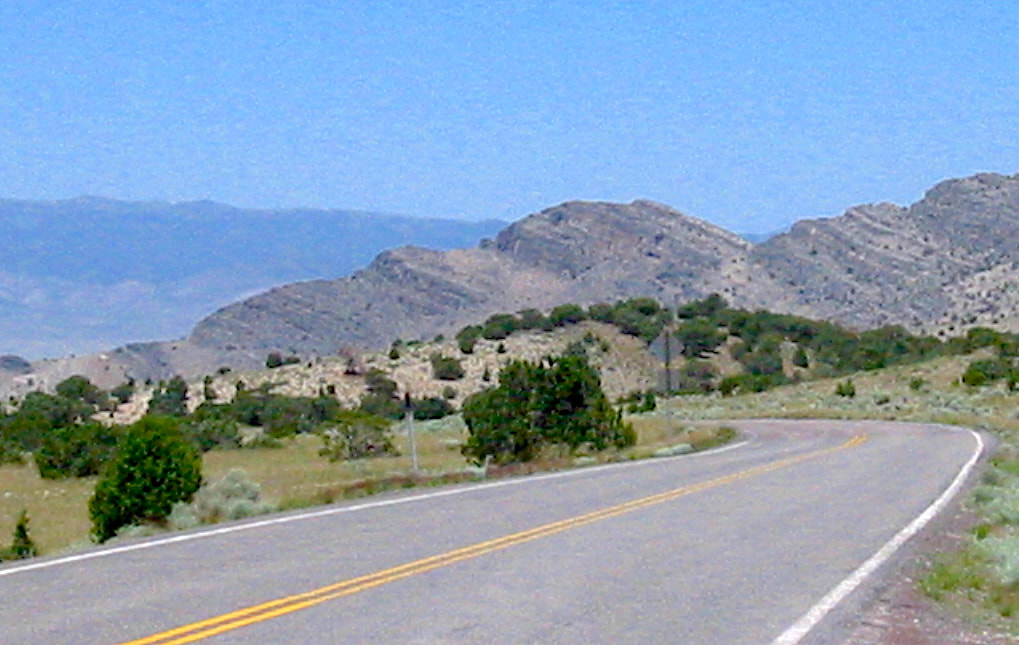 Finally stopped in the old mining town of Milford and crashed in a motel because the campground was closed. Temps in the 90's.
​
(- posted from Ron and Nancy's home in Cedar City Utah)
=====================================
Tuesday, June 8, 2004 - Day 12 - 57 miles
We figured an early start (at the crack of dawn) would help us avoid the stronger afternoon headwinds as we approached Cedar City Utah. Well, it was a good idea anyway. We faced 30+mph headwinds all day and even using the granny-gears to pedal DOWNHILL! I think our average speed over the day came to a whopping 6mph. We reached Cedar City (after yet another assault by a dust storm) and called our new friends to get directions to their home ... at the top of a huge hill, of course! We finally arrived at Ron and Nancy's place ... 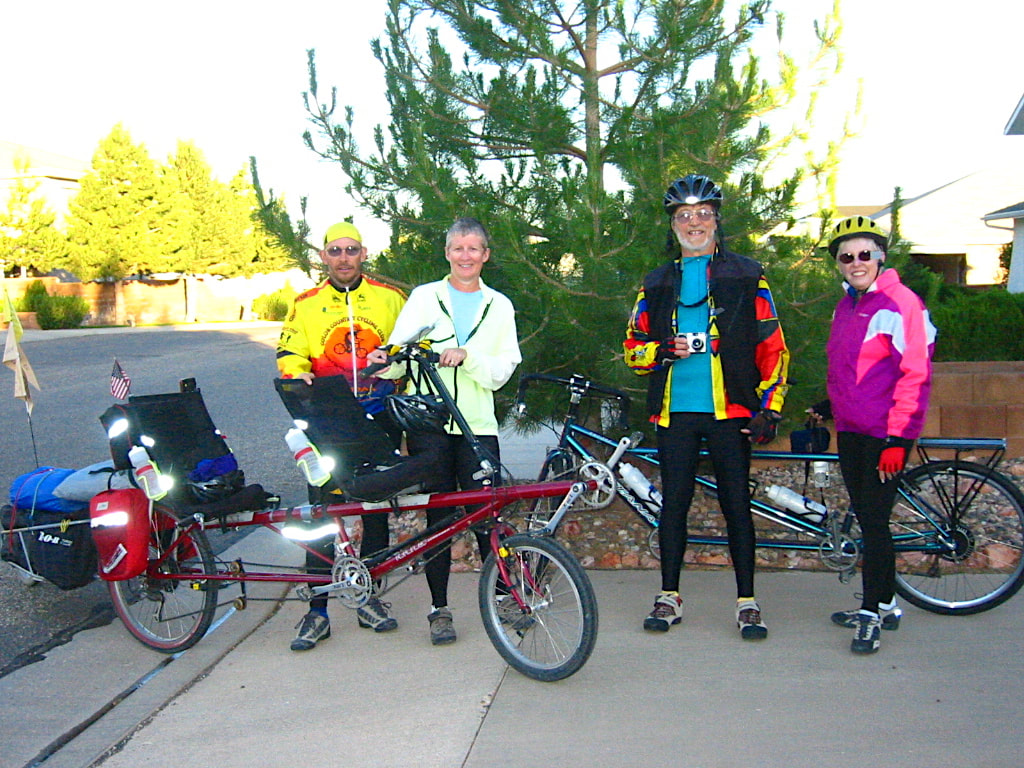 ... had a wonderful dinner, great conversation, and a REALLY wonderful and badly needed night sleep! Temps @ 86 degrees in Cedar City, and brutal winds all day. One of our two toughest days ... EVER!

From here on thru the rest of Utah, we don't expect to find any net-access, as we are moving into high mountain/canyon country that is sparsely populated and, well ... not exactly "modern". Our next update might not happen till at least Telluride Colorado. I hear there are real "coffee-shops" in that trendy touristy town.
​
(- posted from Ron and Nancy's home in Cedar City Utah)
======================================
Thursday, June 10, 2004 - Day 14 - 61 miles
Ron and Nancy escorted us out of town on the bike trail leading into Cedar Canyon. Thanks a million Ron and Nancy!! We had a WONDERFUL time staying with you! Don't forget to visit US when you're in the East again! 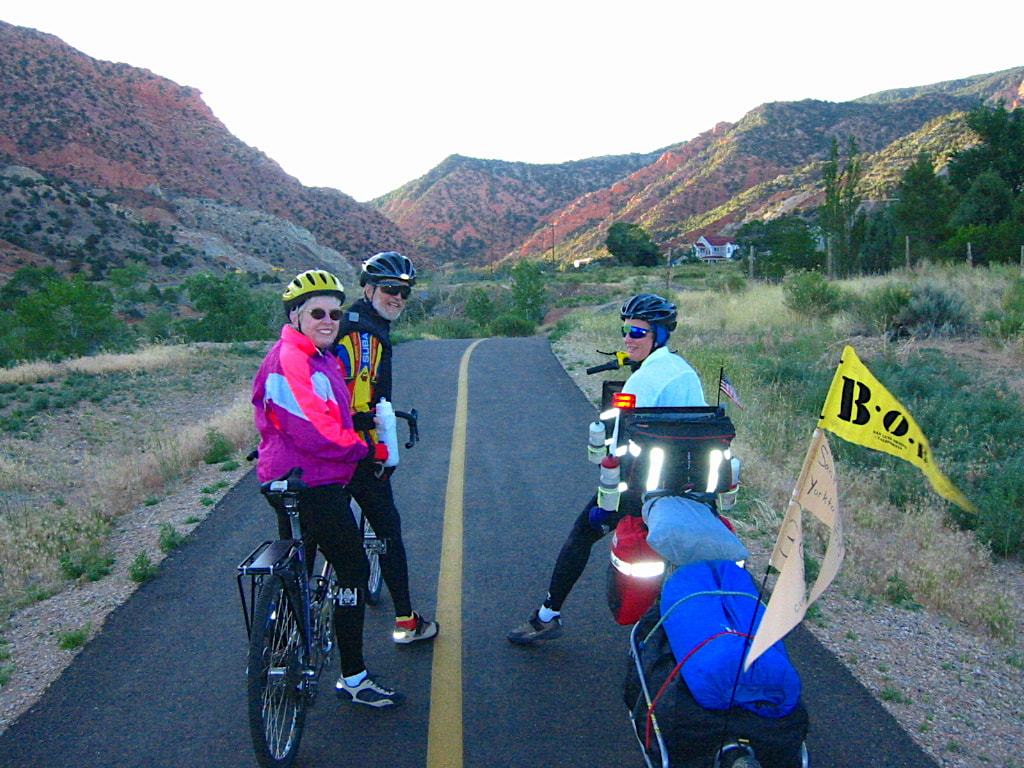 So, we headed up the canyon toward Cedar Breaks. 6 hours, 26 miles, and 4500' gain in elevation later, we arrived at Cedar Breaks National Monument. Temp was 43 degrees, winds were blowing up to 30mph, and we were FREEZING while trying to capture the view on video and stills. 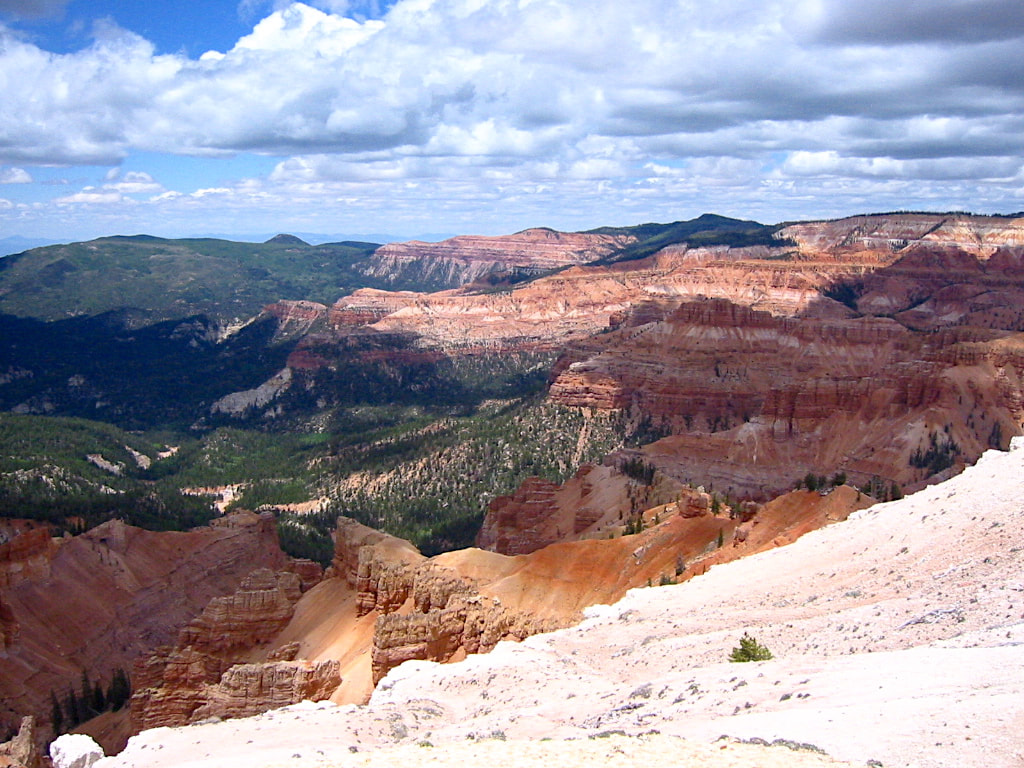 Cedar Breaks National Monument
​Postnote - As we were approaching Cedar Breaks, we encountered a large number of cyclists who appeared to be in some organized group. Imagine our delight to discover the group was an Adventure Cycling Tour of Utah! Better yet, they invited us to join them for lunch at their sag stop! The tour leadersgenerously filled our tummies with hot soup, fruit, and sandwiches, and absolutely insisted we take more with us! They were WELL stocked. I'm sure we will be well taken care of anytime we decide to take one of Adventure Cycling's supported tours. Thanks gang!! 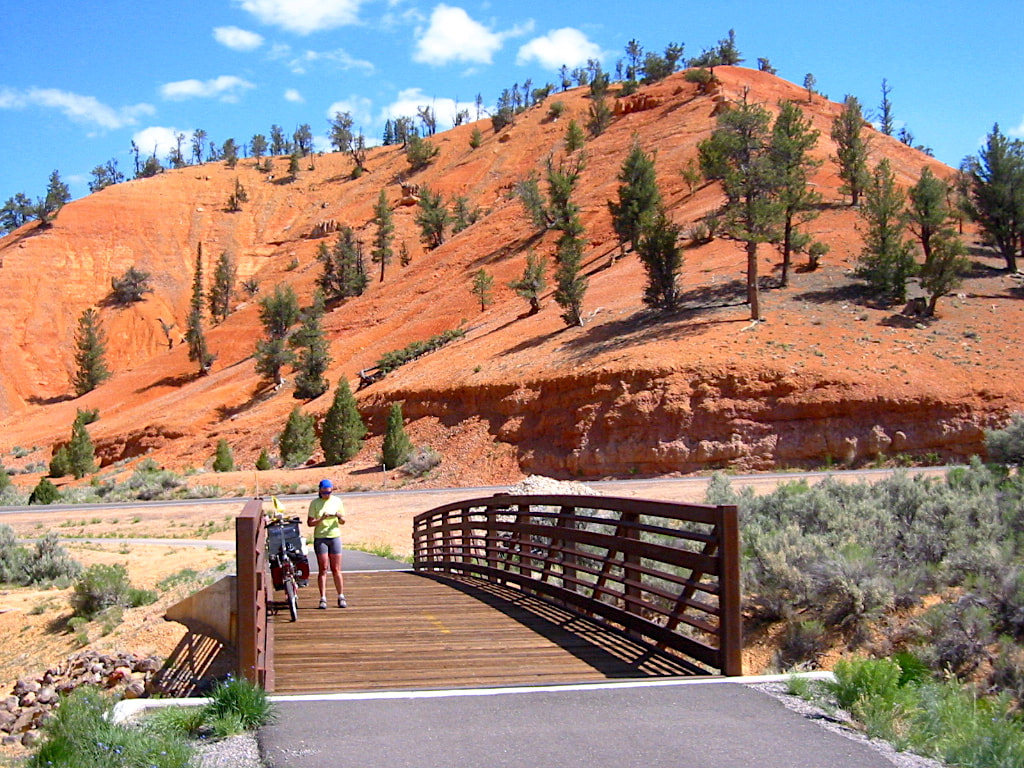 We arrived at Bryce Canyon around noon, found a campground, and spent the afternoon visiting the sights. Unbelievable! 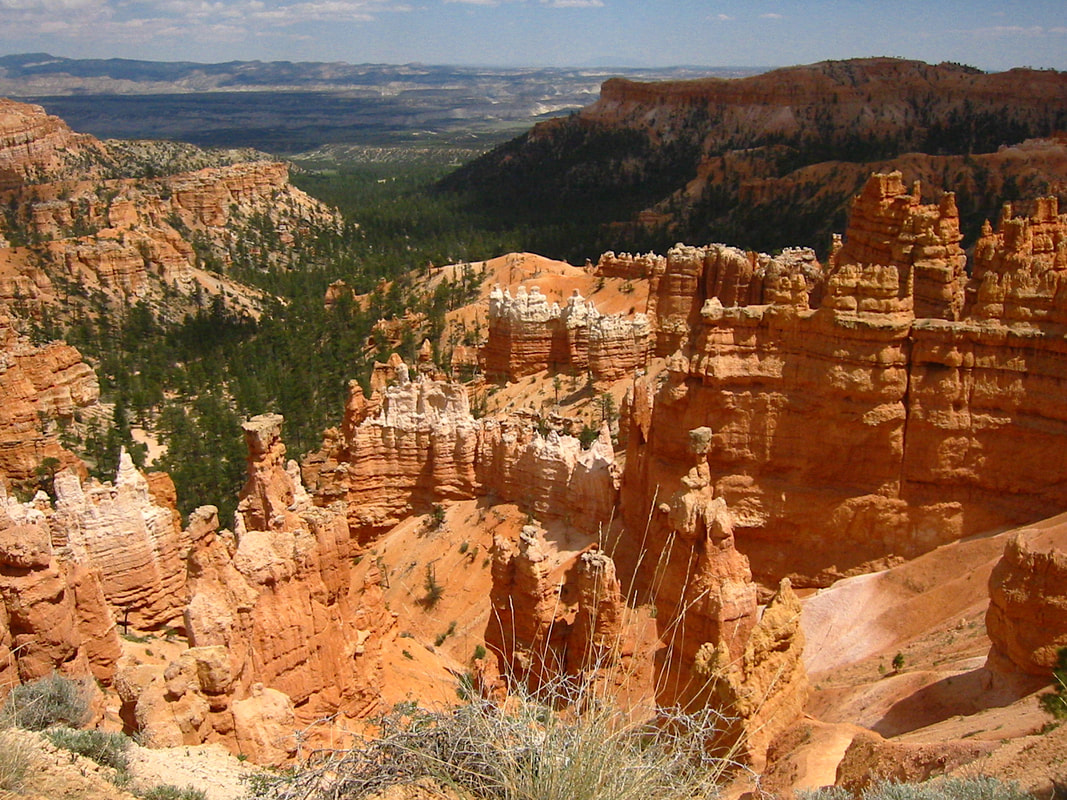 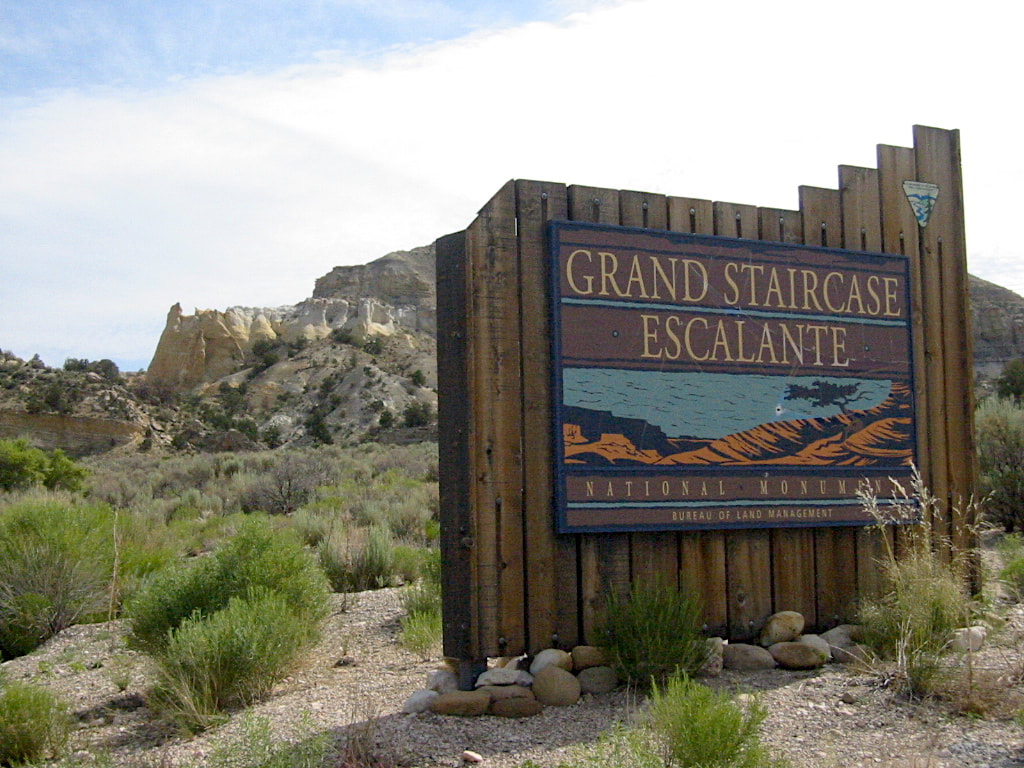 A Grand Staircase, for sure!
​
After Escalante, we discovered a road that can only be described as a biker's Disneyland! The wild ride thru big canyon country, ended at the Escalante river (lowest point in Utah to this point) and this is where we hit the scariest toughest climbing so far on the trip. Getting out of the river canyon required a 2 mile climb that pegged the inclinometer at 14% grades! 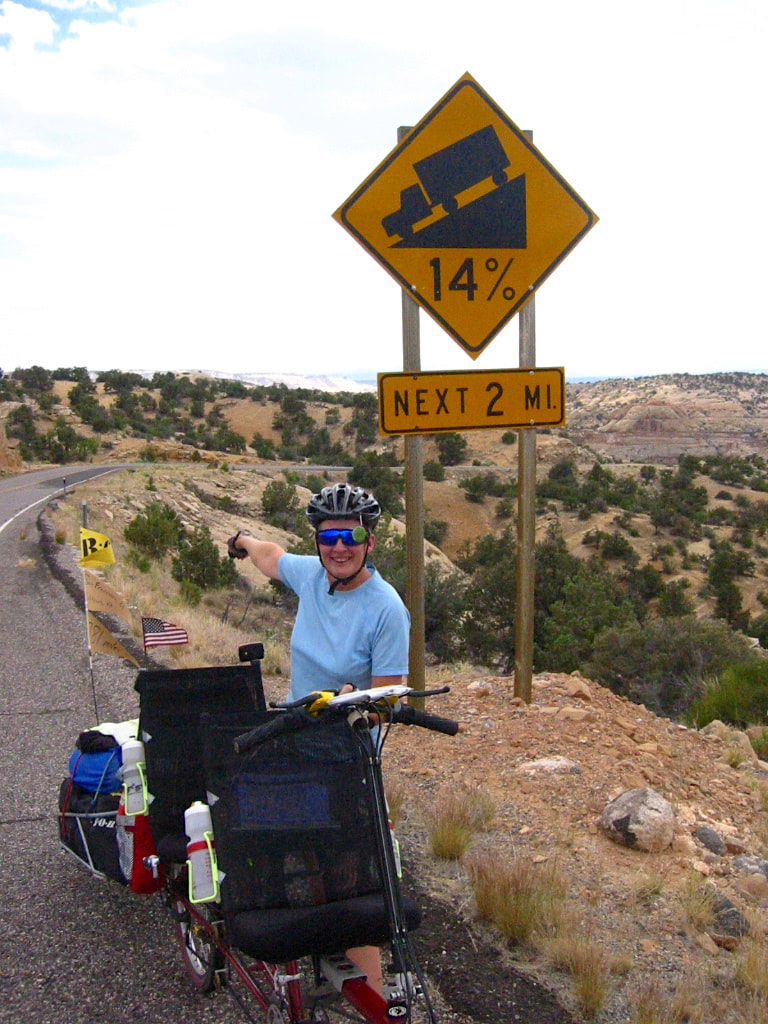 Just to make things even more interesting, that was followed by the climb over the "Hogback" ... a three mile section of road following a narrow spire with no shoulders, no guardrails, and drop-offs of more than 1000' on both sides! Good thing it wasn't too windy! 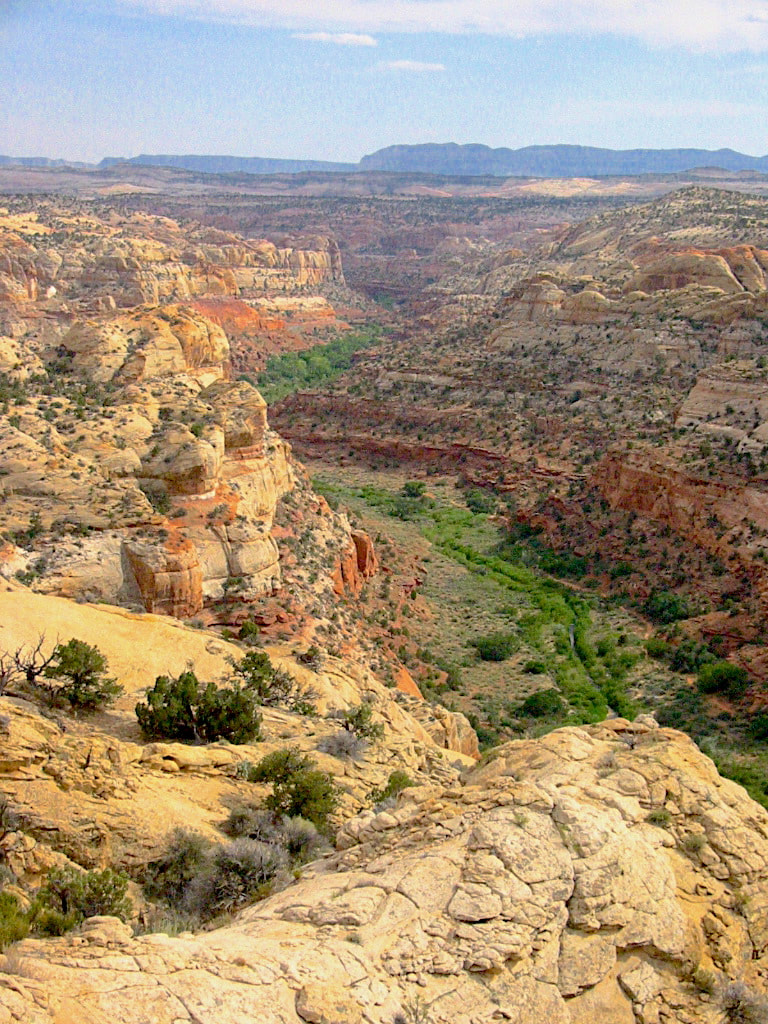 ​Escalante River below the Hogback
​
We finally burned out in BoulderTown in 90+ degree heats. Found a neat little "Bunkhouse" at a grocery/gas station that had showers too! 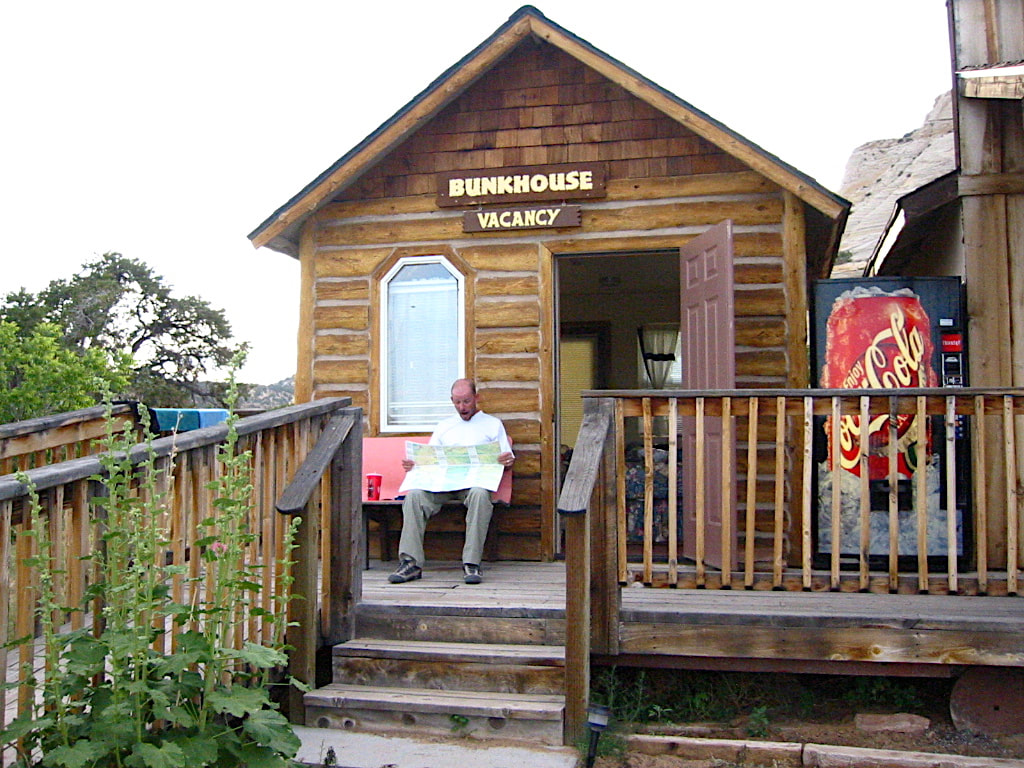 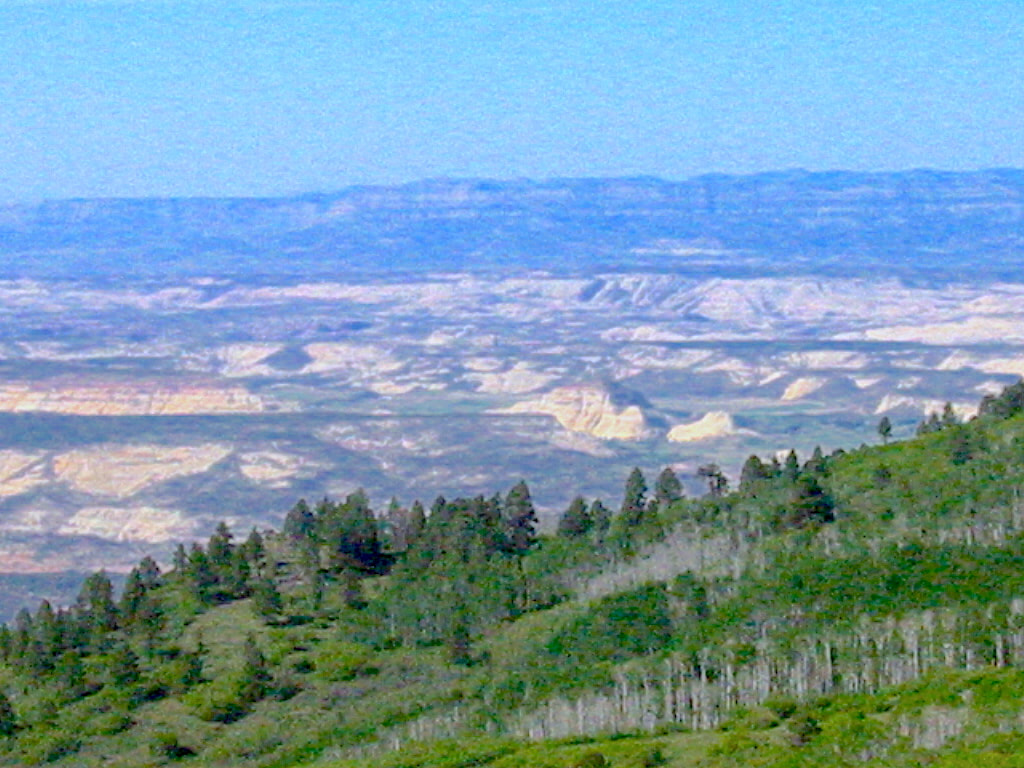 But ... we ran smack into headwinds in the valley before reaching Torry Utah, and had to take a break there before continuing DOWN to Capital Reef National Park. Yes ... REALLY down! We were "forced" to endure strong tailwinds and a 1500' drop to get to Capital Reef, thru a gorgeous red-rock canyon that was so deep (and hot!) that you'll just have to see the VIDEO Karen shot while riding down! 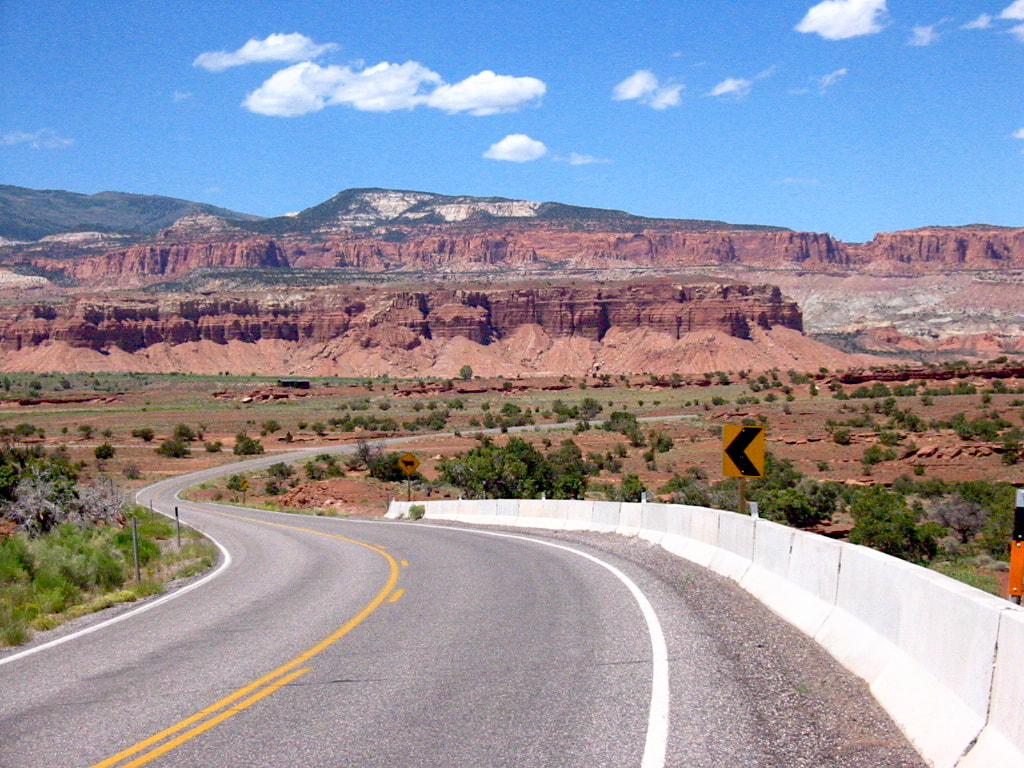 We camped at Capitol Reef, after checking out the Fruita orchards (only the cherries were just beginning to come into season). Shared the campsite all afternoon/evening with mule deer (and bugs) who seem to own the place. 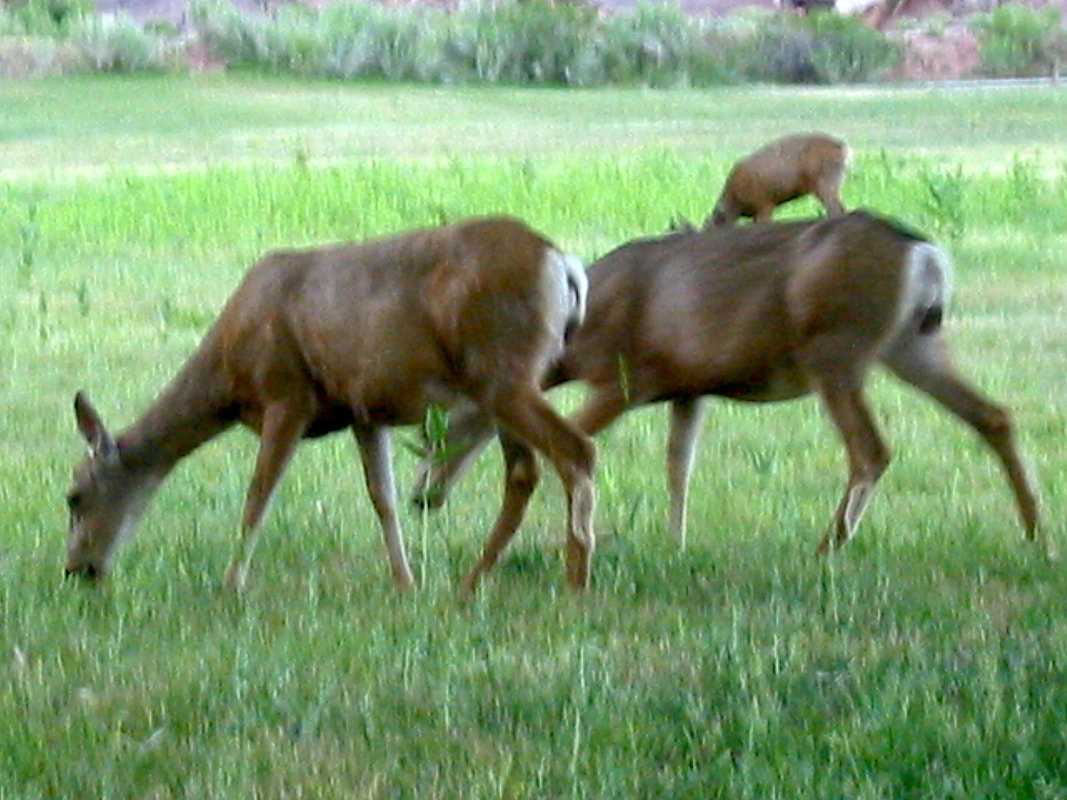 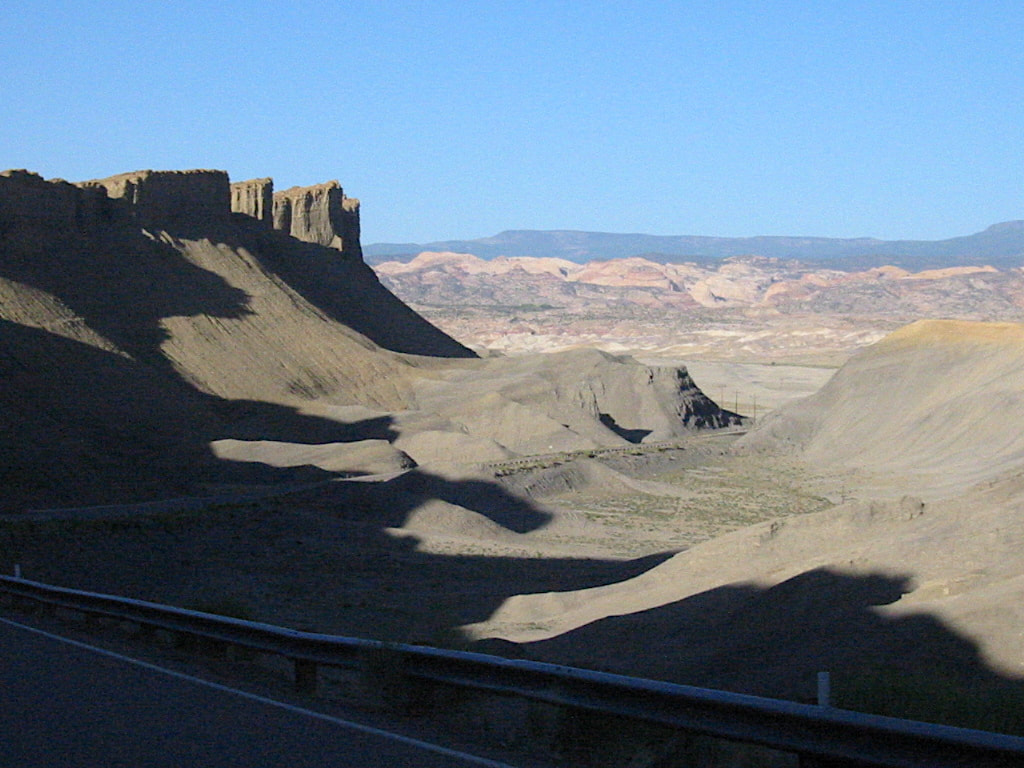 The downhill continued out of the park for many miles before flattening out and leading into Caineville. We stopped briefly there at a coffee/bakery/farm produce store hosted by Ron and Randy. Great folks, great chat. ​ 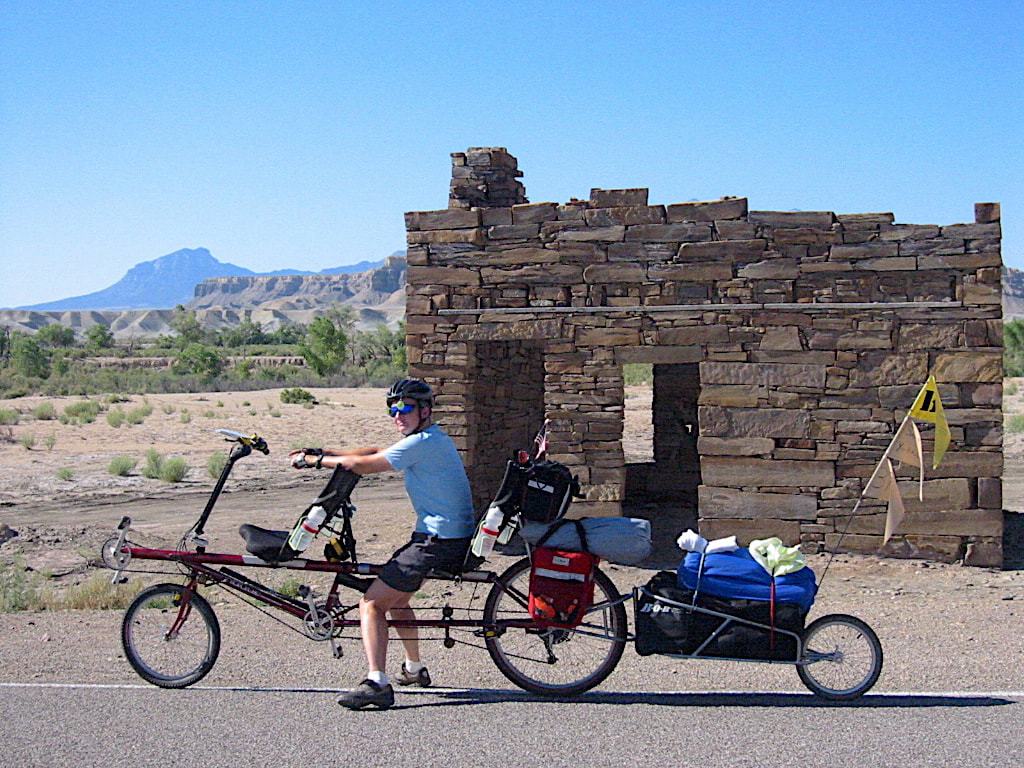 We reached Hanksville shortly after, had breakfast, stocked up with water (including a gallon jug of ICE given to us by the waitress) and headed out. We were feeling pretty safe about this hot dry stretch until we saw the sign of horror for all bicyclists: 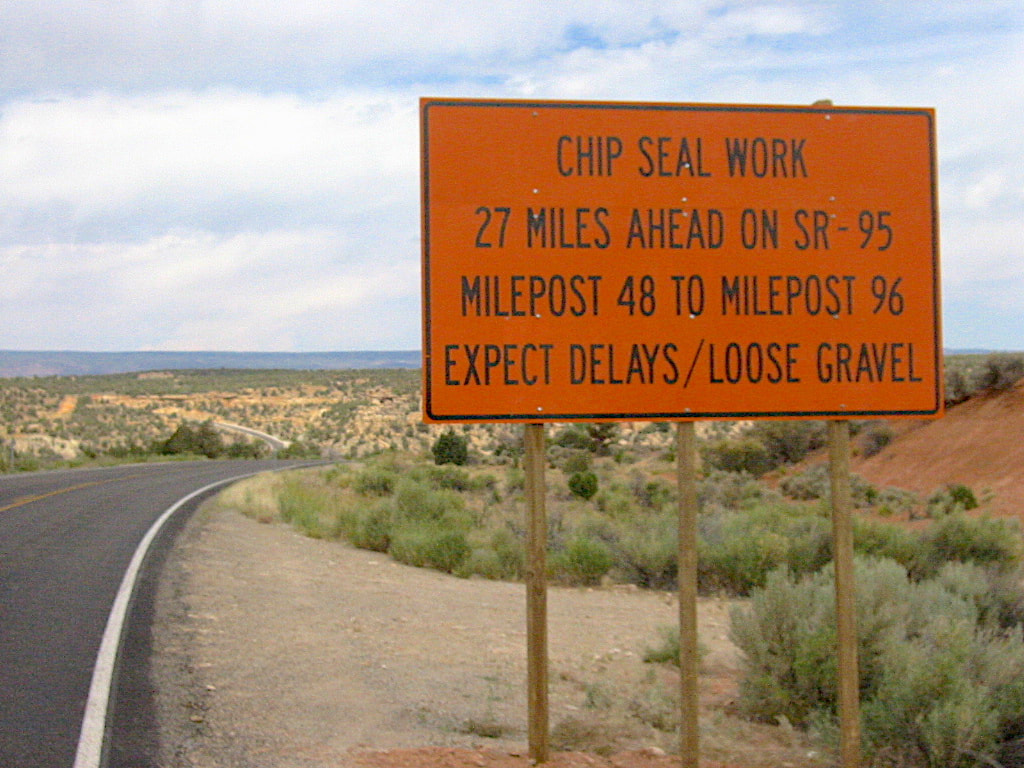 Ohmygawd!
​About ten miles before reaching Hite, we pulled over at Hog Springs rest area to rest, and ponder the upcoming dilemma. A wonderful trail angel named Vicki stopped next to us with her van and we chatted about the road construction ahead that would certainly ruin the next day's ride. Between 50 miles in the 100 degree heat, a climb of 3000' and hot tar and loose gravel, we were sure that after getting started from Hite in the morning, we would have the worst possible day any cyclist could imagine. Well, Vicki just says "Why don't I give you a ride to Natural Bridges at the top?" So, we piled in! Bike, trailer, and everything managed to barely fit in her customized van, and off we went. We stopped at Hite for supplies, and drove on up to Natural Bridges, set up camp, had dinner, and even took a loop drive of the park w/Vicki. 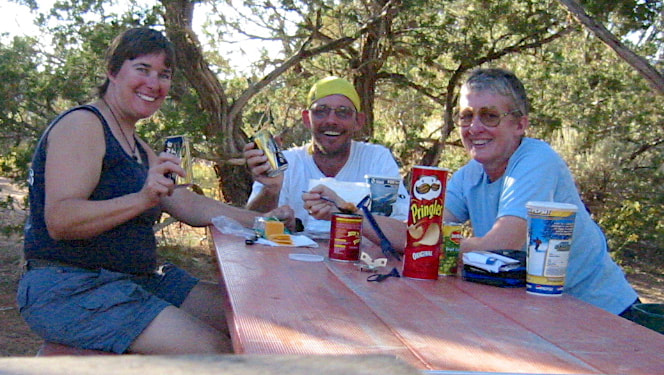 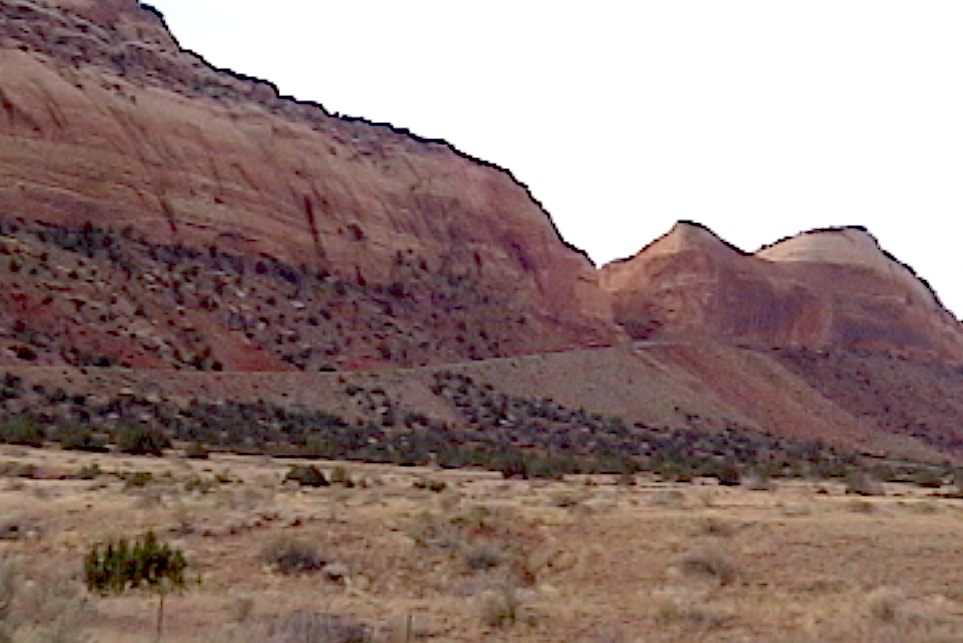 The climb out of Comb Wash
​
(- posted from Blanding Utah public library - Tuesday afternoon)
​
Last night, we got to Monticello and stopped at a pizza joint to eat, and someone comes in and yells "Hey, can I buy you a beer?" It was Vicki! She spent the day shooting photos at Natural Bridges and caught up with us on her way to pick up a mail drop at the Monticello Post Office. So, we found a campsite and spent another evening chatting (after SHOWERS and doing laundry!). That was so cool! Unfortunately, Vicki is heading a different direction from here. See ya later pal!
​
(- posted from Delores Colorado public library - Wednesday afternoon)
​